Blackface! - A History of Minstrel Shows. In 1842, the songwriter Daniel Decatur Emmett and three companions devised a program of singing and dancing in blackface to the accompaniment of bone castanets, fiddle, banjo, and tambourine. 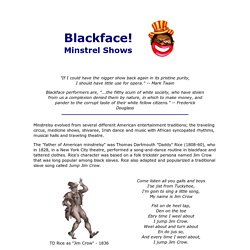 Calling themselves the Virginia Minstrels, they made their first public appearance in February 1843 in a New York City theater. The Virginia Minstrels - 1850s The show was so popular that many imitators emerged while the demand for minstrel shows quickly became insatiable. File:Who Said Watermelon.jpg. The Coon Chicken Inn: North Seattle’s Beacon of Bigotry. Ghost World (2001)- Coon Chicken Inn Scene by Catherine Roth 2009 HSTAA 498 Fall 2008 In the early 1930s, Joseph Staton, an employee of TheNorthwest Enterprise, a prominent African-American newspaper in Seattle, was arrested and booked in jail for vandalizing an automobile parked on the corner of 3rd and Yesler in Pioneer Square. 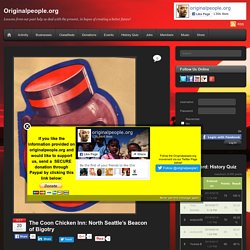 In court a few days later, the judge requested to see a section of a spare tire cover that Staton had removed. When the court attendants brought it out, the judge laughed and remarked, “Well, I’ll just fine you three dollars and you go on home.”[1] The image that Staton removed from the spare tire cover featured the logo of the Coon Chicken Inn, a fried chicken restaurant chain in the Northwest whose logo featured a ‘Coon’, or a racist caricature of an African-American male popular in 19th century minstrel theatre and early 20th century advertising. Coon Chicken Inn with delivery vehicle in the foreground. An open menu. “The best fried chicken you ever tasted! File:I'se so happy - postcard.jpg. Businessinsider. A History Lesson for Conservatives, Racism is Alive in America.

We've all seen it and most of us understand it that racism is alive and well in our Country... 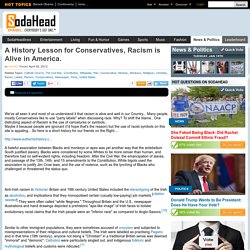 Many people, mostly Conservatives like to use "party labels" when discussing race. Why? To shift the blame.. One distrubing aspect of Racism is the use of caricatures or symbols.. Maybe it because people are ignorant (I'd hope that's the reason) but the use of racist symbols on this site is appaling... A hateful association between Blacks and monkeys or apes was yet another way that the antebellum South justified slavery. Anti-Irish racism in Victorian Britain and 19th century United States included the stereotyping of the Irish as alcoholics, and implications that they monopolised certain (usually low-paying) job markets.

Similar to other immigrant populations, they were sometimes accused of cronyism and subjected to misrepresentations of their religious and cultural beliefs. How Watermelons Became a Racist Trope. It seems as if every few weeks there’s another watermelon controversy. 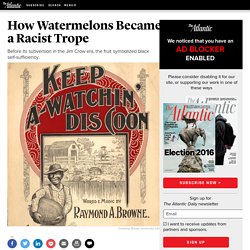 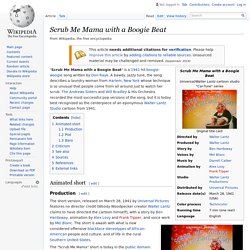 A bawdy, jazzy tune, the song describes a laundry woman from Harlem, New York whose technique is so unusual that people come from all around just to watch her scrub. The Andrews Sisters and Will Bradley & His Orchestra recorded the most successful pop versions of the song, but it is today best recognized as the centerpiece of an eponymous Walter Lantz Studio cartoon from 1941. Animated short[edit] Production[edit] The short version, released on March 28, 1941 by Universal Pictures features no director credit (Woody Woodpecker creator Walter Lantz claims to have directed the cartoon himself), with a story by Ben Hardaway, animation by Alex Lovy and Frank Tipper, and voice work by Mel Blanc. The "Scrub Me Mama" short is today in the public domain. 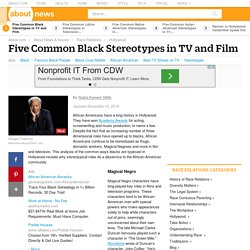 African Americans have a long history in Hollywood. They have won Academy Awards for acting, screenwriting and music production, to name a few. Despite the fact that an increasing number of three-dimensional roles have opened up to blacks, African Americans continue to be stereotyped as thugs, domestic workers, Magical Negroes and more in film and television. This analysis of the common ways blacks are typecast in Hollywood reveals why stereotypical roles do a disservice to the African-American community. Trace Your Black Genealogy in 1+ Billion Records. 30 Day Trial! $37-$47/hr Real Work at home Job Requirements: Must Have Computer. Choose from 1M+ Verified Suppliers. Magical Negro. From Blackface to Blaxploitation: Representations of African Americans in Film - Duke Library Exhibits. African Americans have had a long and rather complex history in the American motion picture industry. 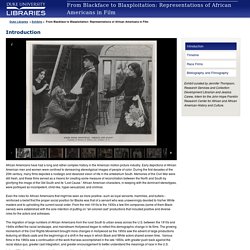 Early depictions of African American men and women were confined to demeaning stereotypical images of people of color. During the first decades of the 20th century, many films depicted a nostalgic and idealized vision of life in the antebellum South.