Www.nbcnews. President-elect Donald Trump heavily out-campaigned his Democratic opponent in the last 100 days of the election, spending roughly 50 percent more time in six key battleground states that pushed him to victory on Nov. 8. 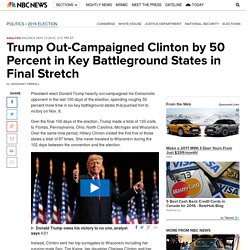 Over the final 100 days of the election, Trump made a total of 133 visits to Florida, Pennsylvania, Ohio, North Carolina, Michigan and Wisconsin. Over the same time period, Hillary Clinton visited the first five of those states a total of 87 times. She never traveled to Wisconsin during the 102 days between the convention and the election. Instead, Clinton sent her top surrogates to Wisconsin including her running mate Sen. Tim Kaine, her daughter Chelsea Clinton and her primary opponent Sen. Related: Policy Divisions Between Trump and GOP Persist After Election On a call with donors Saturday, defeated Democratic presidential nominee Hillary Clinton blamed the actions of FBI Director James B.

That may be true. Donald Trump attacks Hillary Clinton’s swing state ‘firewall’ in 11th-hour campaign blitz. Donald Trump is all over the map. 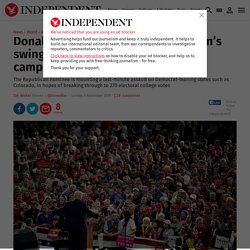 The Republican nominee for president spent Saturday on a cross-country campaign sprint that began early with rallies in Florida and North Carolina before heading west to Nevada and at last Colorado, where he took the stage at Denver’s National Western Complex a little after 10pm. Where have Donald Trump and Hillary Clinton spent their time? - CBS News. On Wednesday, with 13 days left until Election Day, Republican nominee Donald Trump spent his morning in…Washington, D.C., for the grand opening of his Trump Hotel. 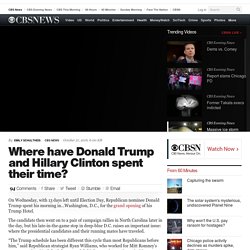 The candidate then went on to a pair of campaign rallies in North Carolina later in the day, but his late-in-the-game stop in deep-blue D.C. raises an important issue: where the presidential candidates and their running mates have traveled. “The Trump schedule has been different this cycle than most Republicans before him,” said Republican strategist Ryan Williams, who worked for Mitt Romney’s 2012 campaign. “And that’s because of, I think, some interesting priorities on behalf of the campaign and the realities they’re facing.” It’s often said that the most valuable currency presidential candidates have isn’t their money—it’s their time. So, as they enter the final stretch before Election Day, how have Hillary Clinton and Donald Trump spent theirs? Trump and Clinton visit battleground states as election day looms. Donald Trump and Hillary Clinton blitzed five battleground states between them on Friday, with four days remaining until American voters will choose their next president. 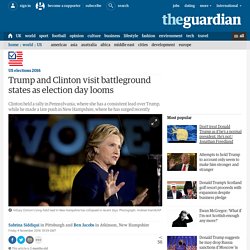 Clinton began the day with a rally in Pennsylvania, a state where she holds a consistent lead over Trump, while the Republican nominee made a last-minute push in New Hampshire. Trump has surged in recent days in the Granite State, where he scored his first victory of the Republican primary contest earlier this year. Clinton’s long-held lead in New Hampshire has collapsed in recent days. She was shown trailing Trump or tied with him in four new public polls taken in the wake of the letter from the FBI director, James Comey, informing Congress that it was possible new emails had been discovered related to the investigation into Clinton’s use of a private email server.

The news has helped ensure that a number of Republicans and libertarians previously skeptical about Trump have now rallied around the nominee. How Trump won the presidency with razor-thin margins in swing states - Washington Post. How does the US election work and which swing states will determine the winner? CBS poll: Women give Clinton edge in battleground states. Donald Trump’s new electoral map: Missouri is now a swing state and Virginia isn’t. Clinton vs Trump: Which are the states to watch? All men are created equal, the United States Declaration of Independence announces proudly with only the slightest hint of hypocrisy. 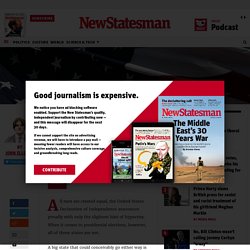 When it comes to presidential elections, however, all of those states are not. A big state that could conceivably go either way is likely to receive a lot of attention from campaigns, reporters and obsessive British bloggers with too much time on their hands. But smaller states? States that will reliably vote one way or the other, where the result has all the tension of a wet tissue? Forget about it. The explanation for this lies in the idiosyncratic system through which Americans choose their leaders.

There are all sorts of oddities to this system, and I could bang on about it for ages (in fact, if that's your bag, I already have). There's a third point, which is a matter not of constitutional or state law but of contemporary political reality: in the elections so far this century, the electoral map has calcified. Donald Trump has a path to victory again thanks to Florida. There's been some movement toward Donald Trump in both national and swing-state polling over the past week. 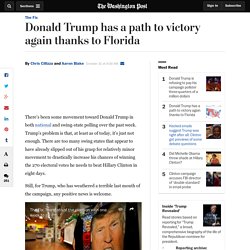 Trump's problem is that, at least as of today, it's just not enough. There are too many swing states that appear to have already slipped out of his grasp for relatively minor movement to drastically increase his chances of winning the 270 electoral votes he needs to beat Hillary Clinton in eight days. Still, for Trump, who has weathered a terrible last month of the campaign, any positive news is welcome. With one week to go, Donald Trump and Hillary Clinton are in a statistical dead heat nationally. More swing state polling blues for Trump. Hillary Clinton leads Donald Trump in three key battleground states, according to new polls released Tuesday — including a commanding advantage in vote-rich Pennsylvania. 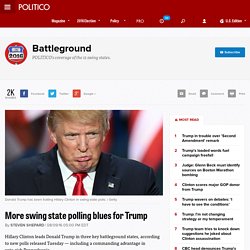