Log In - New York Times. Africa is poised for sustainable growth and development. But there are risks. As we know, growth accelerations are pretty commonplace among developing countries. 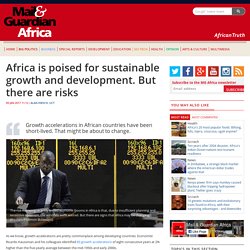 Economist Ricardo Haussman and his colleagues identified 83 growth accelerations of eight consecutive years at 2% higher than the five-yearly average between the mid-1950s and early 2000s. But most growth accelerations, and especially those in Africa, were short-lived. They did not form the foundation of a long-term step-change to a more diversified growth path. Drawing on the language of American economist WW Rostow, most growth accelerations don’t amount to a “take-off”. The risk following the recently ended booms is that, due to insufficient planning and excessive optimism, the windfalls of growth accelerations were wasted. Vandals Deface South African Mosques with Blood, Pig's Snout. 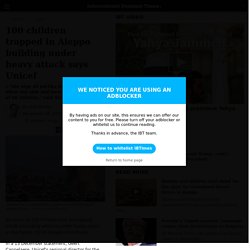 In a 13 December statement, Geert Cappelaere, Unicef's regional director for the Middle East and North Africa said: "According to alarming reports from a doctor in the city, many children, possibly more than 100, unaccompanied or separated from their families, are trapped in a building, under heavy attack in east Aleppo. "We urge all parties to the conflict to allow the safe and immediate evacuation of all children. Unaccompanied and separated children have the right to be registered by a neutral humanitarian organisation and be reunified with their families – wherever they may be. " Sirleaf Leads Ecowas Mission to Seek End to Gambia Standoff. 25 dead in bombing at Egypt's main Coptic Christian cathedral.

CAIRO -- A bombing at a chapel adjacent to Egypt's main Coptic Christian cathedral killed 25 people and wounded another 49 during Sunday mass, in one of the deadliest attacks carried out against the religious minority in recent memory. 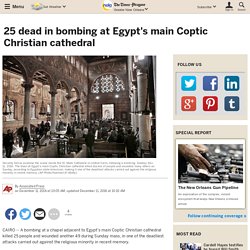 The attack came two days after a bomb elsewhere in Cairo killed six policemen, an assault claimed by a shadowy group that authorities say is linked to the outlawed Muslim Brotherhood. Islamic militants have targeted Christians in the past, including a New Year's Day bombing at a church in the Mediterranean city of Alexandria in 2011 that killed at least 21 people. Egypt's official MENA news agency said an assailant lobbed a bomb into a chapel close to the outer wall of St Mark's Cathedral, seat of Egypt's Orthodox Christian church and home to the office of its spiritual leader, Pope Tawadros II, who is currently visiting Greece.

Egyptian state TV and the Health Ministry gave the casualty toll. Cameroon Lures Liverpool Defender Ahead of Clash Against Nigeria. Crunch time in Congo, community philanthropy, and continuing genocide: IRIN’s Top Picks. Every week, IRIN's team of editors curates a selection of humanitarian reports and opinion you may have missed, from in-depth analyses and features to academic studies and podcasts: Equality and economy in the Middle East As Bessma Momani points out right off the bat in this briefing for the Brookings Institution, one of the major drivers of the Arab Spring was economic stagnation. 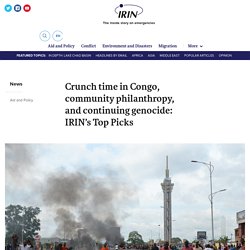 Almost six years further on, many countries in the region are still struggling, but they are also failing to utilise what should be one of their greatest resources – women. While women in many countries in the Middle East and North Africa have higher university enrollment rates than men, they are still comparatively underemployed. There are many reasons for this that have nothing to do with cultural norms: mandatory retirement ages are lower for women than men – this limits career expectations and pensions – and many female entrepreneurs don’t have access to collateral for loans. Zimbabwe 'Has the Strongest Currency in Africa' - Report. Ghana's Electoral Commission Warns Against Fake Results. Ghana: Polls 'Exceptionally Successful' - Electoral Commission Ghana Star, 7 December 2016 The Electoral Commission, Ghana (EC) has patted itself on the back describing the general elections, so far, as "exceptionally successful" after close of polls at 5:00pm Wednesday. 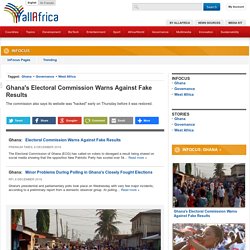 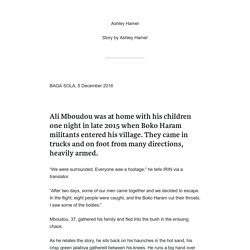 They came in trucks and on foot from many directions, heavily armed. “We were surrounded. Everyone was a hostage,” he tells IRIN via a translator. “After two days, some of our men came together and we decided to escape. Mboudou, 37, gathered his family and fled into the bush in the ensuing chaos. As he relates the story, he sits back on his haunches in the hot sand, his crisp green jalabiya gathered between his knees. The village Mboudou fled from was Blarigui, located in the remote swamplands of the Lake Chad Basin, close to Chad’s border with northeastern Nigeria. It took him a whole day to cross the various waterways, before he reached solid ground and relative safety outside the regional capital, Bol. Ghana, West Africa's Darling of Democracy Heads to the Polls.

Fake US Embassy Issuing Fake Visas Operated In Ghana For Ten Years In The Same Vicinity As US Embassy 'Undetected' - Joint US/Ghana Police Operation Shuts It Down - Ghanacelebrities.com. The ‘fake’ embassy building issuing fake visas For ten years a crime ring made up of Turkish and Ghanaian nationals operated a fake US embassy right near the real one in Accra, issuing visas to their carefully cultivated exotic customers. 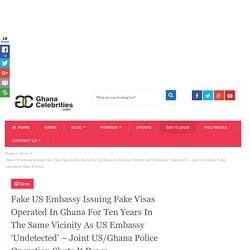 The fake embassy issued fake visas, fraudulently obtained real ones, and other necessary documents such as passports, banking and other records to their clients, who were brought in from other parts of Ghana, Togo and the Ivory Coast – all for the cool price of $6,000. According to a statement issued by the US Department of State, a joint task force involving officers of the US’ Regional Security Office (RSO), the Ghana Police Service, as well as the Ghana Detective Bureau, Ghana SWAT, and officials from the Canadian Embassy were involved in busting up the crime ring, as part of a larger operation dubbed “Operation Spartan Vanguard” which aims at combating fraud in the sub region. seized fake documents. Zimbabwe: Opposition in Anti-Mugabe Coalition Talks. Zimbabwe's opposition is talking up an anti-Robert Mugabe coalition for the 2018 elections but differences over strategies and implementation are threatening the establishment of such an electoral alliance. 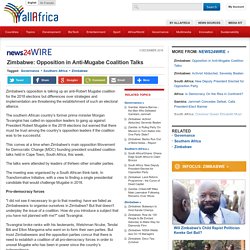 The southern African country's former prime minister Morgan Tsvangirai has called on opposition leaders to gang up against President Robert Mugabe in the 2018 elections but warned that there must be trust among the country's opposition leaders if the coalition was to be successful. This comes at a time when Zimbabwe's main opposition Movement for Democratic Change (MDC) founding president snubbed coalition talks held in Cape Town, South Africa, this week. 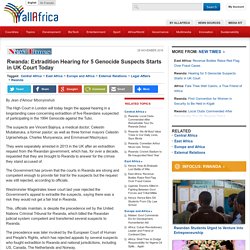