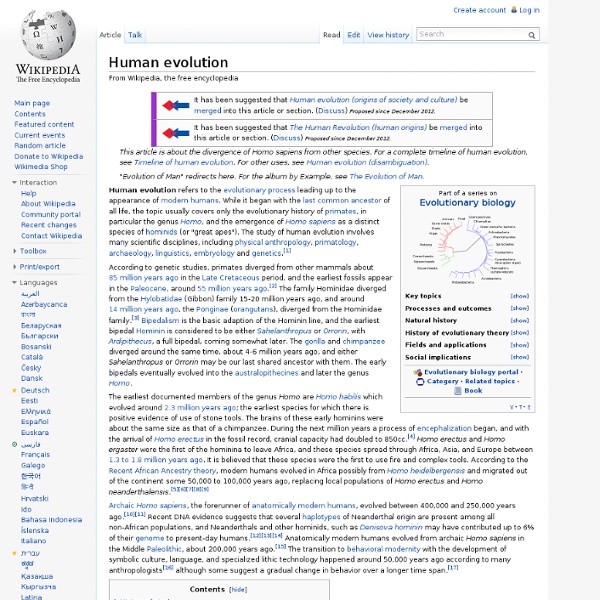 Human evolution is the evolutionary process leading up to the appearance of modern humans. While it began with the last common ancestor of all life, the topic usually covers only the evolutionary history of primates, in particular the genus Homo, and the emergence of Homo sapiens as a distinct species of hominids (or "great apes"). The study of human evolution involves many scientific disciplines, including physical anthropology, primatology, archaeology, ethology, linguistics, evolutionary psychology, embryology and genetics.[1] The earliest documented members of the genus Homo are Homo habilis which evolved around 2.3 million years ago; the earliest species for which there is positive evidence of use of stone tools. History of study[edit] Before Darwin[edit] Darwin[edit] The first debates about the nature of human evolution arose between Thomas Huxley and Richard Owen. First fossils[edit] A major problem at that time was the lack of fossil intermediaries. The East African fossils[edit] Related:  History

Witchcraft in Tudor and Stuart Essex [From Mary Douglas (ed.), Witchcraft, Confessions and Accusations (Tavistock, London, 1970)] Alan Macfarlane Witchcraft in Tudor and Stuart Essex (1) p.81 This paper will assume a knowledge of the historical background to witchcraft prosecutions in sixteenth- and seventeenth- century . There are many topics that, like witchcraft, need serious investigation by the historian of pre-industrial equipped with contemporary anthropological ideas. In the year 1593 a literary character was made to say- concerning witches: 'I heare of much harme done by them: they lame men and kill their cattle, yea they destroy both men and children. The first object of this paper will be to see how far the assertion that there was 'scarce any towne or village' without its witch was true. Court records, principally those of the Assize and ecclesiastical courts, provide the bulk of the actual prosecutions for witchcraft in Essex. Yet even these numbers seriously underestimate the amount of interest in witchcraft. 1.

John Shea, Human Evolution, and Behavioral Variability – Not Behavioral Modernity Hello there! If you enjoy the content on Neuroanthropology, consider subscribing for future posts via email or RSS feed. John Shea, a professor of anthropology at Stony Brook University, gives us a double whammy of actual human evolution this month, rather than the typical victorious narrative. Using fossil and archaeological evidence, Shea takes down the idea that we became “modern” late in human evolution, with that sense of modernity (or progress) often tied to causes like “a cognitive revolution” or “an explosion of culture.” In other words, he wants to contradict the popular image just below: We have known for years that this image is entirely wrong. The sequence of being hunched over as a shuffling apeman in the middle to an erect man at the end is also wrong. Shea adds one more important element that helps to completely dismantle this popular image. Shea’s article, Refuting a Myth about Human Evolution, is this month’s feature article in American Scientist. This view is wrong.

Lasers Reveal a Maya Civilization So Dense It Blew Experts’ Minds They were hidden there, all this time, under the cover of tree canopies in the jungles of northern Guatemala: tens of thousands of structures built by the Maya over a millennium ago. Not far from the sites tourists already know, like the towering temples of the ancient city of Tikal, laser technology has uncovered about 60,000 homes, palaces, tombs and even highways in the humid lowlands. The findings suggested an ancient society of such density and interconnectedness that even the most experienced archaeologists were surprised. “Everywhere that we looked, there was more settlement than we expected,” said Thomas Garrison, a National Geographic explorer and an archaeologist at Ithaca College. Researchers found the structures by shooting lasers down from planes to pierce the thick foliage and paint a 3-D picture of the ground below. The method has been used elsewhere, including around the Angkor Wat temple in Cambodia. But it is not only about protecting cultural treasures, Ms. Ms. Dr.

Poll: Just 39% believe in evolution From NBC's Mark MurrayToday it's not only Abraham Lincoln's birthday; it's also Charles Darwin's. And a brand-new Gallup poll tied to Darwin's birthday finds that just 39% of Americans believe in evolution. As expected, Gallup notes, education plays a big role here: 74% of those with post-graduate degrees believe in evolution. Ditto religion: 55% who don't attend church believe in evolution, versus 24% of weekly churchgoers who believe in it. And vote here on who you think had a a bigger impact on the world, Lincoln or Darwin? Culture of Cambodia Throughout Cambodia's long history, religion has been a major source of cultural inspiration. Over nearly two millennia, Cambodians have developed a unique Khmer belief from the syncreticism of indigenous animistic beliefs and the Indian religions of Buddhism and Hinduism. Indian culture and civilization, including its languages and arts reached mainland Southeast Asia around the 1st century AD. It is generally believed that seafaring merchants brought Indian customs and culture to ports along the Gulf of Thailand and the Pacific en route to trade with China. The Kingdom of Funan was most probably the first Khmer state to benefit from this influx of Indian ideas. History[edit] The golden age of Cambodia was between the 9th and 14th century, during the Angkor period, during which it was a powerful and prosperous empire that flourished and dominated almost all of inland Southeast Asia. Architecture and housing[edit] Angkor Wat, the most famous Cambodian heritage site. Religion[edit]

Chilam Balam: Introduction Sacred Texts Native American Maya Index Previous Next p. 3 The Books of Chilam Balam are the sacred books of the Maya of Yucatan and were named after their last and greatest prophet. Chilam, or chilan, was his title which means that he was the mouth-piece or interpreter of the gods. Balam means jaguar, but it is also a common family name in Yucatan, so the title of the present work could well be translated as the Book of the Prophet Balam. During a large part of the colonial period, and even down into the Nineteenth Century, many of the towns and villages of northern Yucatan possessed Books of Chilam Balam, and this designation was supplemented by the name of the town to which the book belonged. This Prophet Balam lived during the last decades of the Fifteenth Century and probably the first of the Sixteenth Century 1 and foretold the coming of strangers from the east who would establish a new religion. p. 4 p. 5 professions. p. 6 p. 7 p. 8 p. 9 p. 10 p. 11 p. 12 p. 13 M = Book of Chilam of Mani.

Vietnamese rights lawyer jailed over call for democracy | World news A dissident lawyer and son of a Vietnamese communist revolutionary leader has been sentenced to seven years in prison and a further three years' house arrest for calling for an end to Vietnam's government and its one-party system. Cu Huy Ha Vu was sentenced after a dramatic one-day trial in Hanoi in which one of his defence attorneys was ejected by the judge and his other three lawyers walk out in protest. Vu was left alone to defend himself and had several heated exchanges with the judge. The court convicted him of conducting propaganda against the state for calling for a multiparty government system, demanding the abolition of the Community party's leadership, defaming the state and distorting Vietnam's struggle for independence by calling the country's war against the US a civil war. Vietnam does not tolerate any challenge to its one-party rule. "I did not commit the crime of spreading propaganda against the state," Vu told the court. Judge Nguyen Huu Chinh disagreed.

Civil Rights Movement - Black History The civil rights movement was a struggle for social justice that took place mainly during the 1950s and 1960s for blacks to gain equal rights under the law in the United States. The Civil War had officially abolished slavery, but it didn’t end discrimination against blacks—they continued to endure the devastating effects of racism, especially in the South. By the mid-20th century, African Americans had had more than enough of prejudice and violence against them. Jim Crow Laws During Reconstruction, blacks took on leadership roles like never before. In 1868, the 14th Amendment to the Constitution gave blacks equal protection under the law. To marginalize blacks, keep them separate from whites and erase the progress they’d made during Reconstruction, “Jim Crow” laws were established in the South beginning in the late 19th century. Moreover, southern segregation gained ground in 1896 when the U.S. World War II and Civil Rights Rosa Parks Little Rock Nine Finally, President Dwight D. Sources