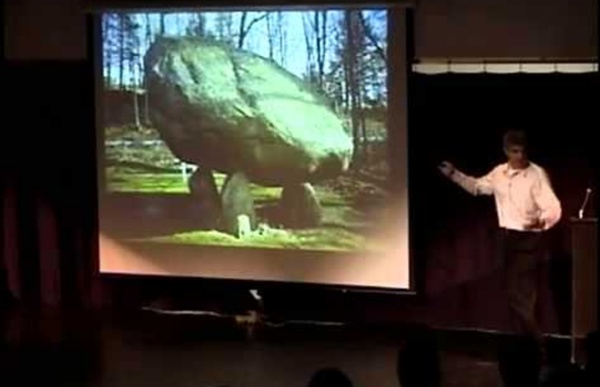 Roman Sword discovered off Oak Island radically suggests Ancient Mariners visited New World 1,000 years before Columbus Researchers investigating the mysterious Oak Island, located on the south shore of Nova Scotia, Canada, have made a startling announcement regarding the discovery of a Roman ceremonial sword and what is believed to be a Roman shipwreck, radically suggesting that ancient mariners visited North America more than a thousand years before Columbus. Evidence of the finding, which was exclusively revealed to Johnston Press and published in The Boston Standard, was uncovered by researchers involved in The History Channel’s series Curse of Oak Island, which details the efforts of two brothers from Michigan as they attempt to solve the mystery of the Oak Island treasure and discover historical artifacts believed to be concealed on the island. J. Hutton Pulitzer, lead researcher and historic investigator, along with academics from the Ancient Artifact Preservation Society, have compiled a paper on the finding, which is scheduled to be published in full in early 2016. The Mystery of Oak Island

2.8-Billion-Year-Old Spheres Found in South Africa: How Were They Made? By Tara MacIsaac, Epoch Times Spheres found in the mines of South Africa have piqued the curiosity of researchers for decades. According to Michael Cremo and other researchers of prehistoric culture, these spheres add to a body of evidence suggesting intelligent life existed on Earth long before a conventional view of history places it here. Cremo has traveled the world gathering information on out-of-place artefacts (ooparts); he compiled his findings in the popular book, “Forbidden Archaeology: The Hidden History of the Human Race.” In 1984, while investigating the spheres, he contacted Roelf Marx, curator of the museum of Klerksdorp, South Africa, where some of the spheres are kept.

Interactives . United States History Map . Indians Originally part of the Creek tribe, the Seminole migrated to Florida in the early 1700s, when the region was under Spanish control. They lived in houses called chickees, which had no walls and were built on stilts, with a wooden floor and thatched roof. The Seminoles grew corn, beans, and squash and supplemented their diet through hunting and fishing. They were also known for their skill at woodcarving and basketry. The Forbidden History of Ancient China: Aryan Mummies and Hundreds of Pyramids [Hitler regarded individuals who were 6ft. 6in. and taller as being closest genetic relatives of the original proto-Aryan tribes from central Asia from which the Caucasian people and civilizations are said to have descended. Recent discoveries of hundreds of ancient mummies in Asia are forcing a re-examination of old Chinese books that describe as being of great height, with deep-set blue eyes, long noses, full beards, and red or blonde hair. The discoveries of the giant 4,000-year-old “Beauty of Loulan” and (six-foot, six-inch) “Charchan Man” support the legends about these mythical ancient Aryans.] After years of controversy and political intrigue, archaeologists using genetic testing have proven that Caucasians roamed China’s Tarim Basin thousands of years before East Asian people arrived. In historic and scientific circles the discoveries along the ancient Silk Road were on a par with finding the Egyptian mummies. Mair hopes to publish his new findings in the coming months.

The Great Smithsonian Cover-Up: 18 Giant Skeletons Discovered in Wisconsin Scientists are remaining stubbornly silent about a lost race of giants found in burial mounds near Lake Delavan, Wisconsin, in May 1912. The dig site at Lake Delavan was overseen by Beloit College and it included more than 200 effigy mounds that proved to be classic examples of 8th century Woodland Culture. But the enormous size of the skeletons and elongated skulls found in May 1912 did not fit very neatly into anyone’s concept of a textbook standard. CROP CIRCLES AMAZING CAPTURED ON FILM An image from Colin Andrews featuring the Hackpen formation of 1999 The collection of Colin Andrews crop circle photographs from 1983-2004 can be seen on his CD-ROM “Cosmic Artist”. There are more and more videos about crop circles as they are appearing more frequently. This is an amazing observation of recent crop design creations.

Prehistoric America plus the Ainu and Jomon Ancient Man and His First Civilizations Legend: Mesoamerica = Mexico and Central America Pre-Columbian = Before Christopher Columbus Megalithic Monuments of Mu by Robert Stanley from UnicusMagazine Website In September of 1985, after traveling to 57 countries, I was absolutely amazed to discover the ruins of a lost civilization in my own backyard. The questions I'm most often asked about the ancient, megalithic monuments I found in Malibu are: