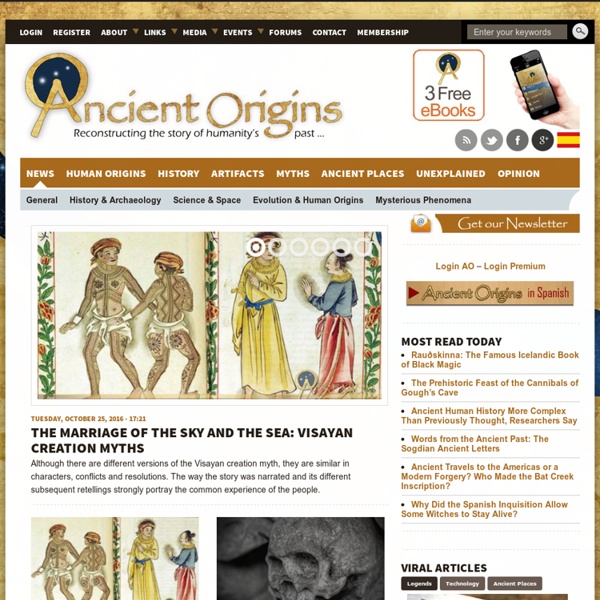 Ancient Origins seeks to uncover, what we believe, is one of the most important pieces of knowledge we can acquire as human beings – our beginnings. While many believe that we already hold such knowledge, our view is that there still exists a multitude of anomalies and mysteries in humanity's past that deserve further examination. We therefore wish to foster an open community that is dedicated to investigating, understanding and explaining the origins of our species on planet earth. To this end, we aim to organize, support and even finance efforts in this direction. Our aim is to move beyond theories and to present a thorough examination of current research and evidence and to offer alternative viewpoints and explanations to those currently held by mainstream science and archaeology. Come with us on a journey to explore lost civilisations, sacred writings, ancient places, unexplained artefacts and scientific mysteries while we seek to reconstruct and retell the story of our beginnings.

Human Exodus May Have Reached China 100,000 Years Ago Catherine Brahic | New Scientist | Aug 8 2014 OUR direct ancestors may have found their way out of Africa much earlier than we think. As new fossil remains emerge from China and south-east Asia, the traditional story of how we left Africa is being challenged. The accepted view is that Homo sapiens evolved in Africa 200,000 years ago and stayed there until 60,000 years ago, when they struck out through the Middle East and spread around the world. Any older hominin bones found outside Africa are deemed dead ends.

Roman Army - Recruitment, Legions, Siege Warfare & More Evolution of the Roman Army: Recruitment of Soliders for the Roman Army: The Roman army changed over time. The consuls had the power to recruit troops, but in the last years of the Republic, provincial governors were replacing troops without the approval of the consuls. This led to legionaries loyal to their generals rather than Rome. Newly Found Megalithic Ruins In Russia Contain The Largest Blocks Of Stone Ever Discovered By Michael Snyder An incredible discovery that was recently made in Russia threatens to shatter conventional theories about the history of the planet. On Mount Shoria in southern Siberia, researchers have found an absolutely massive wall of granite stones. Some of these gigantic granite stones are estimated to weigh more than 3,000 tons, and as you will see below, many of them were cut “with flat surfaces, right angles, and sharp corners”.

Top 10 Worst Plagues In History Health History is dotted with epidemics and plagues, but a certain number of them stand out as unique for their severity and impact on future generations. This is a list of the worst plagues in man’s recorded history. Moscow Plague and Riot The first signs of plague in Moscow appeared in late 1770, which would turn into a major epidemic in the spring of 1771. DNA Analysis Shows That Native American Genealogy Is One of the Most Unique in the World Anna LeMind, GuestWaking Times The suppression of the Native Americans and the decimation of their culture is a black page in the history of the United States. The discrimination and injustices towards this ancient race, which had lived on the American continent long before the European conquerors came to this land, are still present to this day despite the efforts of different groups and organizations trying to restore justice.

Free Online Ancient and Medieval History Courses from Top Universities Here are some online ancient and medieval history courses offered free by three top universities: Utah State University, the Massachusetts Institute of Technology (MIT) and Open University. Utah State University (USU) USU offers a course exploring the development of civilization in the West, and touches on other continents as well. The course is designed to scratch the surface of ancient world history for beginning/amateur historians. History and Civilization

Archaeologists Uncover More Evidence Middle Earth Might Have Been Real One of the most recently discovered species of human was a small creature discovered on the Indonesian Island of Flores in 2003, known as homo floresiensis. Archaeologist Mike Morwood discovered the primitive human species, which was immediately nicknamed “hobbit”, because of their very short stature. When I say short, I mean truly short – the species lived on the Island of Flores somewhere between 17,000 to 95,000 years ago, and they only stood a surprising 3 feet, 6 inches off the ground. 10 Free Ancient and Medieval History Online Courses (Spring 2015) Interested in learning about ancient or medieval history? Here are ten eleven free MOOCs (Massive open online courses) that you can take between April and June 2015, which take a look at topics such as Roman archaeology, medieval manuscripts, the Trojan War, and Norse sagas. Warfare and Weapons in Ancient Egypt From: Canvas Network Starting Date: 6 Apr 2015 Length: 5 weeks Dynastic Egypt united in approximately 3100 B.C. It remained an independent land for much of its 3,000 year history, before becoming absorbed into the Roman Empire in 30 B.C.

What We Learned About Human Origins in 2013 The existence of a mysterious ancient human lineage and the possibility that the earliest humans were actually all one species were among the human-evolution-related discoveries of 2013. Other breakthroughs include the sequencing of the oldest human DNA yet. Here's a look at what scientists learned about humanity and human origins this year:

DNA Evidence Debunks the "Out-of-Africa" Theory of Human Evolution By Steven Strong Contributing Writer for Wake Up World Scientific evidence refuting the theory of modern humanity’s African genesis is common knowledge among those familiar with the most recent scientific papers on the human Genome, Mitochondrial DNA and Y-chromosomes. Regrettably, within mainstream press and academia circles, there seems to be a conspicuous – and dare we say it – deliberate vacuum when it comes to reporting news of these recent studies and their obvious implications. The Roman Domus The Roman domus was much more than a place of dwelling for a Roman familia. It also served as a place of business and a religious center for worship. The size of a domus could range from a very small house to a luxurious mansion. In some cases, one domus took up an entire city-block, while more commonly, there were up to 8 domus per insula (city-block).