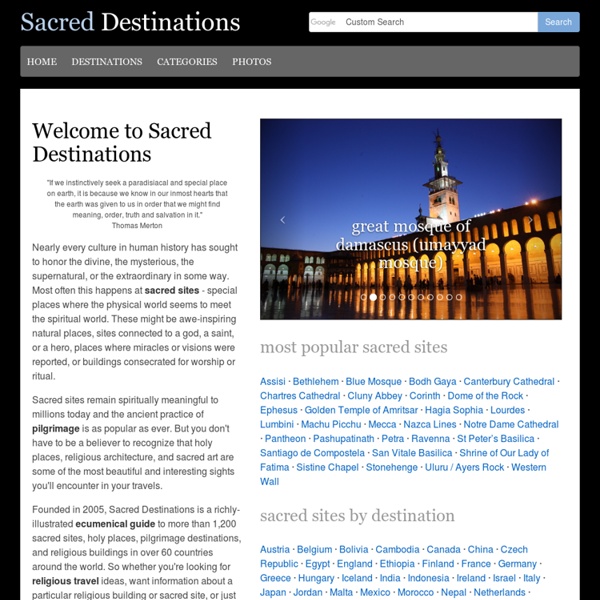 Welcome Nearly every culture in human history has sought to honor the divine, the mysterious, the supernatural, or the extraordinary in some way. Most often this happens at sacred sites - special places where the physical world seems to meet the spiritual world. These might be awe-inspiring natural places, sites connected to a god, a saint, or a hero, places where miracles or visions were reported, or buildings consecrated for worship or ritual. Sacred sites remain spiritually meaningful to millions today and the ancient practice of pilgrimage is as popular as ever. But you don't have to be a believer to recognize that holy places, religious architecture, and sacred art are some of the most beautiful and interesting sights you'll encounter in your travels.

4,000-Year-Old Burial Revealed on Welsh Island Linked to Mysterious Druid Sorcerers Excavations are underway on the 4,000-year-old Bronze Age burial cairn known as ‘Bryn Celli Ddu Bach’ on the British island of Anglesey, located off the north coast of Wales. Anglesey is famous for its association with the Druids, a mysterious order of Celtic sorcerers, healers and astrologers. The cairn sits within a complex ritual landscape that is rich with megalithic monuments and ancient structures. The North Wales Chronicle reports that the burial mound, which sets next to the famous, 5,000-year-old passage tomb of Bryn Celli Dhu, is under excavation until July 7. 25 Secret Small Towns in Europe you MUST Visit 1. Cesky Krumlov, Czech Republic There’s no other town in the world that I am more fond of than the quaint, charming, fairytale-like town of Cesky Krumlov in southern Bohemia. It’s as if you have stepped into a time warp – small cobblestone roads, bridges every which way you look, and no, there’s no McDonalds!

Stonehenge is not alone: 7 ancient megaliths you've never seen These stone structures are as mysterious as they are beautiful. Positively looming with significance, the mysteriously arranged structure of Stonehenge is one of the world's greatest wonders. But these odd stone arrangements can be found throughout the world in many shapes and sizes. Known as megaliths, these giant stones formed prehistoric structures in amazing (and perplexing!) feats of construction.

Graham Hancock Reveals Mind Boggling Mysteries Of The Great Pyramid & Who Really Built It The Facts:Musk's SpaceX has begun launching satellites into Earth's orbit that will provide 5G infrastructure to the world. They will be launching hundreds more over the year.Reflect On:Are we acting too quickly on dangerous technology without safety testing? Are we as humans more connected to having the latest greatest technology than we are to our own health and wellness? SpaceX has already begun launching satellites into space, which are set to provide 5G internet to the world. Mysterious Forests Forests have an ancient and mysterious charm that keeps us all coming back, whether we're photographers looking for the perfect shot or just travelers and weekenders. An expansive, natural and healthy forest is like a cathedral erected to the glory of nature, which is probably why we find these photos to be so stunning. Luckily for those of us stuck in the city, talented photographers flock to forests' shaded canopies to take stunning photos like these. Kilian Schönberger and Guillermo Caballa are just a couple of talented photographers who find the forests of their countries to be endless wells of inspiration. If you or someone you know of has some amazing photos of mysterious forests that belong in this list, please add those photos to this list! Vote for your favorites, too!

The Bosnian Pyramid Complex: Larger, Older & More Mysterious Than Pyramids In Egypt The Facts:In 2005, a giant pyramid complex consisting of 11 structures was discovered in Bosnia. One of the structures is larger than the great pyramid. The majority of scholars who have been brought in to study it have little to no doubt that these are real.Reflect On:If these are indeed real and not mere natural formations, what are the implications? Pyramid structures bigger than Egypt, and also possibly much older than Egypt, would change everything we think we know about our past, and this is just one example. If the Bosnian pyramid of the sun is genuine, and there is very little doubt in my mind that it isn’t, then we are confronted with the highest structure in the world, and also the tallest pyramid in the world – Phillip Copens, author and pyramid expert.

World Heritage Centre - World Heritage List In 1979, the Committee decided to inscribe the Ohrid Lake on the World Heritage List under natural criteria (iii). #: As for 19 Natural and Mixed Properties inscribed for geological values before 1994, criteria numbering of this property has changed. See Decision 30.COM 8D.1 Watch: Clap In Front of the Mayan Kukulkan Pyramid & It Mimics The Sound of the Quetzal Bird The Facts:An ex-model who was set to testify against Silvio Berlusconi in a bribery case and also was preparing to release a book alleging Berlusconi's Satanic practices died from what is currently believed to be “murder by radioactive poisoning.”Reflect On:As difficult as it is for many to fathom, is it perhaps necessary for us to acknowledge and confront the growing revelations of dark practices on the part of the global elite for the purposes of our own evolution? There are many people who don’t believe that the world’s elite have been religiously conducting Satanic practices in the bowels of their mansions and other private hideaways throughout history. Those doubters argue that if such a thing was happening, there would be no way they would have been able to keep it a secret all this time. Not that it’s a ‘secret’ any more to those truth-seekers who are open to this perception-bending reality. ‘I Met The Devil’ Poisoned

TOP 10 UNESCO WORLD HERITAGE SITES TO VISIT . This is the comprehensive list of the top 10 Unesco World Heritage Sites that every traveler should visit at one point in life. They are not just Unesco World heritage sites but also some of the most historical places in the world. If you’ve been wondering which famous landmarks in the world you should visit, this list of the world heritage sites will guide you and all you’ll need is to get your packing list ready. “Large Quantites” Of Liquid Mercury Found Underneath Oldest Pyramid In Mexico We're creating viewer supported news. Become a member! Amazing discoveries continue to emerge from the strange world of archaeology and ancient history. This time, an archaeologist by the name of Sergio Gomez has discovered “large quantities” of liquid mercury in a chamber underneath the third largest pyramid of Teotihuacan (feathered serpant), a very ancient city located in Mexico.

10 Of The World's Most Unusual Towns Travel A town is generally accepted as any region bigger than a village and smaller than a city. It has its own government, name, and boundary, complete with marketplaces and people spread throughout the area. 2,000-year-old underground city discovered by scientists—what it contains is terrifying A ‘lost’ 2.000-year-old underground city has been unearthed by experts in Iran, what they found inside was completely unexpected and terrifying. Located in the area near the city of Samen, archaeologists excavated the remains of around 50 large underground rooms that served as houses some 2,000 years ago. The discovery of the underground city in is incontrovertible evidence that archeology is a science that requires extreme patience in order to obtain valuable rewards. After 12 years of excavations, researchers have finally announced the existence of countless artifacts, skeletons and more than 50 rooms of different sizes connected by tunnels, intricately built some 2,000 years ago—dating back to the period of the fall of the Achaemenid Empire (550-330 BC) and the rise of the Parthian Empire (247 BC-224 AD).

33 Unbelievable Places To Visit Before You Die. I Can’t Believe These Actually Exist On Earth… So many other-worldly places exist right on our planet, and we never even knew about it. Here are 33 landmarks that look like paintings and scenes from science fiction movies. earthporm.com During the rainy season, the world’s largest salt flat becomes the world's largest mirror. The Salar was born when several prehistoric lakes joined into one. The salt flat is so reflective, it’s used to calibrate satellites.