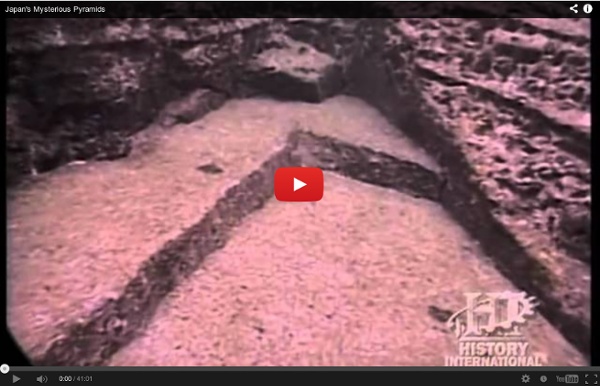 R. M. S. Queen Mary Early History and Culture One of the most recognizable remnants of Japan's so-called "Tomb period" is the tomb of Emperor Nintoku, who is said to have reigned during the 4th century. With all the technological innovations coming from modern Japan, it's easy to forget that even they had a Stone Age. From around the middle of the 11th century B.C.E. to 300 B.C.E., Japan was populated by a Neolithic civilization called the Jômon (rope pattern) culture. This group of hunters and gatherers decorated their pottery by twisting rope around the wet clay, to produce a distinctive pattern. Remnants of their pit-dwellings and enormous mounds of discarded shells mark the locations of their settlements, which were scattered throughout the islands. But it wasn't until the Yayoi period (300 B.C.E. to 250 C.E.) that Japan became a rice-loving culture. The entrance gate to a Shinto shrine is called a torii. The Tomb period (250 C.E.-552 C.E.) gets its name from the massive tombs that dot the landscape to this day. The Land of Wa

Infiltration Ancient Japan - The Ancient Japanese Empire The Geisha, the traditional Japanese ideal of beauty Where did the Japanese come from? Why did they settle the islands? What did life look like before history was written down? In order to get a handle on ancient Japanese history, it helps to consider that it is driven by outside influences. Jomon Culture in Japan The Jomon people were some of the earliest people to establish villages in Japan Although the Japanese do not settle Japan until the third century B.C., humans had lived in Japan from about 30,000 B.C.. Then around 10,000 B.C., these original inhabitants developed a unique culture which lasted for several thousand years: the Jomon culture. We divide the Jomon into six separate eras—ten thousand years, after all, is a long time and even preliterate cultures change dramatically over time. The Kofun Cuirass, a well preserved example of early Japanese armor The Incipient Jomon, which is dated from about 10,500 B.C. to 8,000 B.C. has left us only pottery fragments. The Ainu

New England Ruins - Home Japanese Feudalism and European Feudalism Although Japan and Europe did not have any direct contact with one another during the medieval and early modern periods, they independently developed very similar socio-political systems. Often, these systems are labeled as feudal. What is feudalism? In other words, there are peasants who are tied to the farm land and work for protection plus a portion of the harvest, rather than for money. Similarities between Japanese and European Feudalism Feudal Japanese and European societies were built on a system of hereditary classes. In both feudal Japan and Europe, constant warfare made warriors the most important class. Both knights and samurai rode horses into battle, used swords, and wore armor. Feudal lords in Europe built stone castles to protect themselves and their vassals in case of attack. Differences between Japanese and European Feudalism Japanese feudalism was based on the ideas of the Chinese philosopher Kong Qiu or Confucius (551-479 BCE).

Silent UK – Urban Exploration & Underground Photography Japanese History - Facts About Japan - Ancient Japan The four islands that make up the Japanese archipelago have been inhabited by humans for at least 30,000 years—though some theories suggest the area was populated as long as 200,000 years ago! If you don't have time to digest the history of Japan (and unless you're a scholar or a speed reader you probably don't) you should at least familiarize yourself with some of the basic facts about Japan before embarking on your journey. Understanding the facts about Japan can only add another layer of meaning to the temples, parks, religious ceremonies and cultural wonders you are bound to encounter during your visit. What follows, then, is a cursory look at Japanese history, a jumping off point for further study about the history of Japan, and a quick reference for a few key facts about Japan. Japan history begins with the migration of people from the Asian mainland during a period in which the sea separating present day Japan from China and the Korean Peninsula was only partially formed.