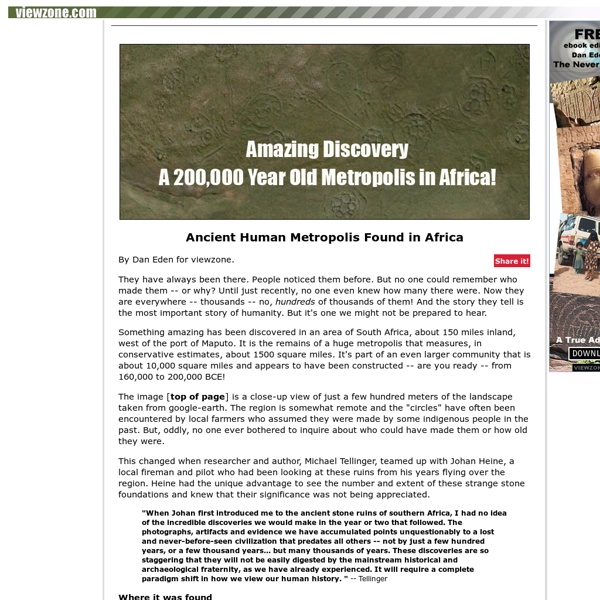 By Dan Eden for viewzone. They have always been there. People noticed them before. But no one could remember who made them -- or why? Until just recently, no one even knew how many there were. Now they are everywhere -- thousands -- no, hundreds of thousands of them! Something amazing has been discovered in an area of South Africa, about 150 miles inland, west of the port of Maputo. The image [top of page] is a close-up view of just a few hundred meters of the landscape taken from google-earth. This changed when researcher and author, Michael Tellinger, teamed up with Johan Heine, a local fireman and pilot who had been looking at these ruins from his years flying over the region. "When Johan first introduced me to the ancient stone ruins of southern Africa, I had no idea of the incredible discoveries we would make in the year or two that followed. Where it was found The area is significant for one striking thing -- gold. The individual ruins [see below] mostly consist of stone circles.

Strange Artifacts, Baghdad Battery This experiment proved that electric batteries were used some 1,800 years before their modern invention by Alessandro Volta in 1799. It also seems that the use of similar batteries can be safely placed into ancient Egypt, where several objects with traces of electroplated precious metals have been found at different locations. There are several anomalous finds from other regions, which suggests use of electricity on a grander scale. The Riddle of "Baghdad's batteries" Strange Fibers Inside The Bone Of The Starchild Skull In 2003 samples of the Starchild Skull's bone were examined using a scanning electron microscope. Previous research had discovered that the bone was thinner and more durable than normal human bone, and when examined under magnification strange fibers were found embedded within the bone. Although the fibers are present only inside the bone, mycologists were consulted in an attempt to identify them as a fungus or other organism.

Must-see Historical Photos That Make You Stop And Think Sometimes, one simple picture can tell you more about history than any story you might read or any document you might analyze. 1. First selfie, ca. 1920: 2. The Ajanta Caves – Ancient Temples Carved from Rock Two thousand two hundred years ago work began on an extensive series of cave monuments in Maharashtra, India. Over a period of hundreds of years, thirty one monuments were hewn piece by piece from the rock face. Then, some speculate around the year 1000AD, they fell in to disuse. Dense jungle grew around, hiding the caves away from human eyes. They Ajanta caves lay undisturbed for hundreds of years. Then, in April 1819, during the time of the British Raj, an officer with the unassuming name of John Smith came rediscovered a doorway to one of the temples.

Amazing Metropolis Discovered in Africa is 200,000 years old! Finding the remains of a large community, with as many as 200,000 people living and working together, was a major discovery in itself. But dating the site was a problem. The heavy patina on the rock walls suggested the structures were extremely old, but the science of dating patina is just being developed and is still controversial. Carbon-14 dating of such things as burnt wood introduces the possibility that the specimens could be from recent grass fires which are common in the area. The breakthrough came quite unexpectedly. Top 10 Ancient Civilizations With Advanced Technology Like a real life Indiana Jones, maverick archeologist David Hatcher Childress has taken many incredible journeys to some of the oldest and most remote spots on earth. Writing prolifically of lost cities and ancient civilizations, he has produced no less than six lengthy books (the Lost Cities series) chronicling the dimly remembered glories of obscure locales from the Gobi desert to Puma Punku in Bolivia, from Mohenjo Daro to Ba'albek. We caught up with him shortly before taking off for New Guinea on yet another archeological expedition and asked him if he would be willing to write an exclusive for Atlantis Rising on the Top 10 Ancient Civilizations with Advanced Technology. He agreed to dig through his archives and give us a story. According to various esoteric sources, the first civilization arose 78,000 years ago on the giant continent known as Mu or Lemuria and lasted for an astonishing 52,000 years. Supposedly, there was one language and one government.

Doctor George Merkl - Anunnaki There is reported to be a race of giant humanoids who have played a role in seeding the Earth with humans, and who periodically return to the Earth to determine how effectively Earth's resources have been utilized by humanity and those extraterrestrial races playing a role in 'managing' humanity. These are described by the Sumerians in the Sumerian Tablets left behind as the 'Anunnaki' from the world 'Nibiru' in the extensive cuneiform texts translated by Zecharia Sitchin. These giant humanoids apparently form the chief 'founding' extraterrestrial race that were the gods described in ancient mythologies and religions. According to the accounts of the Sumerians, the Anunnaki's chief god is Anu, otherwise known as YHWH. The pantheon of Anunnaki as described by Sitchin form key figures in the hierarchy that secretly oversee management of humanity and the planet Nibiru, which periodically returns to the vicinity of Earth. Anunnaki