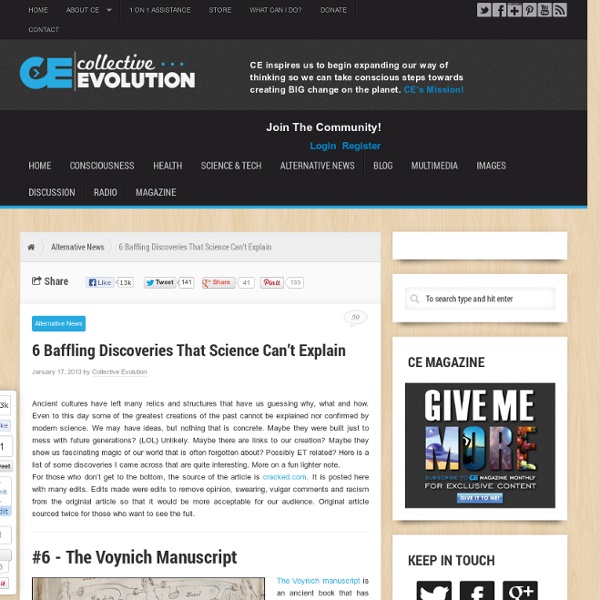 For those who don’t get to the bottom, the source of the article is cracked.com. It is posted here with many edits. Edits made were edits to remove opinion, swearing, vulgar comments and racism from the originial article so that it would be more acceptable for our audience. Original article sourced twice for those who want to see the full. Ancient cultures have left many relics and structures that have us guessing why, what and how. #6 - The Voynich Manuscript The Voynich manuscript is an ancient book that has thwarted all attempts at deciphering its contents. It appears to be a real language–just one that nobody has seen before. Translation: “…and when you get her to put the tennis racket in her mouth, have her stand in a fountain for a while. There is not even a consensus on who wrote it, or even when it was written. As you can imagine, proposed solutions have been all over the map. #5. #4. So what’s the big deal? Oddly, the pipes are clean of debris despite being older than Zeus. #3.

Ancient Sanskrit Online: Series Introduction By Ancient Sanskrit we mean the oldest known form of Sanskrit. The simple name 'Sanskrit' generally refers to Classical Sanskrit, which is a later, fixed form that follows rules laid down by a grammarian around 400 BC. Like Latin in the Middle Ages, Classical Sanskrit was a scholarly lingua franca which had to be studied and mastered. Ancient Sanskrit was very different. It was a natural, vernacular language, and has come down to us in a remarkable and extensive body of poetry. Note: this page is for systems/browsers with Unicode® support and fonts spanning the Unicode 3 character set relevant to (Romanized) Sanskrit. 1. The earliest surviving anthology of poems in any of the Indo-European languages is in Ancient Sanskrit. The circumstances of the original composition of these poems remain unknown. 2. Over time a body of dependent and scholastic material grew up around the poems, known loosely as 'the Veda'. 2.1. 2.2. 3. 4. 5. 6. The consonants are also arranged phonetically. 7. 7.1.

Can you hear like an audio engineer? Hello, my name is Matt. I record, edit, and mix music for a living. My profession requires an extremely discerning ear. This little listening test is to see if you can pick up subtle differences in pitch. What I have below is a series of approximately 1khz sine waves, in sets of two. In each test I’d like you to try to discern which tone is sharper than the original tone. Supposedly, the smallest discernible difference in pitch is +/- 6 Cents. Have a listen, and if you can’t tell the difference, don’t guess – just answer “can’t decide.” You should also try our popular hearing test or article on Audio Sampling Rate 88.2 vs. 44.1.

Skulls with mix of Neandertal and primitive traits illuminate human evolution -- ScienceDaily Researchers studying a collection of skulls in a Spanish cave identified both Neandertal-derived features and features associated with more primitive humans in these bones. This "mosaic pattern" supports a theory of Neandertal evolution that suggests Neandertals developed their defining features separately, and at different times -- not all at once. Having this new data from the Sima de los Huesos site, as the Spanish cave is called, has allowed scientists to better understand hominin evolution during the Middle Pleistocene, a period in which the path of hominin evolution has been controversial. "The Middle Pleistocene was a long period of about half a million years during which hominin evolution didn't proceed through a slow process of change with just one kind of hominin quietly evolving towards the classic Neandertal," said lead author Juan-Luis Arsuaga, Professor of Paleontology at the Complutense University of Madrid. Arsuaga and his team were delighted to work on this effort.

How an open-source computer kit for kids based on Raspberry Pi is taking over Kickstarter When the Raspberry Pi was developed, founder Eben Upton envisioned that the low-cost computer would do its finest work in the classroom, teaching kids about computing. But as more units sold, Raspberry Pi developed a strong, distinctive niche among adult makers, a fruitful group that nonetheless doesn’t really have much in common with a younger age bracket that can be hard to reach. Alex Klein thinks his company’s project, the Raspberry Pi-based Kano, can reinvigorate Upton’s vision and bring the Raspberry Pi (Upton is an adviser to the Kano team) back to the classroom. “We have this nimble, hackable piece of cheap tech” in the Raspberry Pi, said Klein, Kano’s co-founder and CTO. “But it’s not catalyzing the interest of beginners and kids like it should.” “The Kickstarter launch, which has blown away our expectations, has had feedback of all ages, all around the world expressing their excitement over making a computer,” Klein said.

Did the ancients somehow know about DNA? Conventional history tells us that the double-helix structure and base-pairing characteristic of the DNA molecule was not "discovered" until the twentieth century, based upon the work of scientists Rosalind Franklin, Raymond Gosling, James Watson, Francis Crick, and Erwin Chargaff, primarily in the 1950s and 1960s. Erwin Chargaff (1905-2002) in particular was responsible for the insight that DNA molecules contain roughly equal proportions of adenine and thymine (one of the "base pairs" in the DNA molecule) and of guanine and cytosine (the other "base pair"). Since that time, high school students everywhere have had to memorize the letters A-T and G-C in conjunction with their introduction to the molecular structure of DNA. One oft-cited example is the fact that the ancient symbol of the caduceus features two intertwined serpents very reminiscent of the double-helix structure of DNA. Note that in an image about four-fifths of the way down that long web page, Dr.

Computer Man-Caves That Make This Writer Drool And Cry Steven On May 14, 2012 Ever since I first managed to start using a dual monitor setup I was hooked and really couldn’t see myself returning for any long period of time to some piddly laptop or tablet screen especially considering my workflow. There are time that I wish I could even expand beyond those two monitors but that probably won’t happen for some time. So, like you I will have to make do with this awesome collection of computer man-caves with screens galore and make sure my drool towel is close at hand. Thanks to the team at Caveman Circus for putting together a nice collection of which the above are my favorites. Liked this collection? Then make sure to check out our newest computer man cave post!

Massive Underground City Discovered Beneath House-Could Accommodate Over 20,000 People-13 Stories Deep, 13,000 Air Shafts and Much More! (Incredible Video Footage and Photos) | Prophecy (Before It's News) Mind-boggling, breathtaking, and incredible is the massive ancient underground city discovered beneath a house that was being renovated in Turkey, and is still to this day being further uncovered. Massive Ancient Underground Cities & Mysterious Aqueducts Derinkuyu Underground City is an ancient multi-level underground city in the Derinkuyu district in Nevşehir Province, Turkey. Turkey’s Massive, Ancient Underground City was discovered in the 1960s in Turkey, when a modern house above ground was being renovated. It is the largest excavated underground city in Turkey and is part of a network of several underground complexes found across Cappadocia. It begs the question: ”Why would people want to live ‘that’ deep underground?” Isaiah 2:10-21 10 They will hide in caves in the rocky hills or dig holes in the ground to try to escape from the Lord’s anger and to hide from his power and glory! Cave entrances of Cappadocia And, in the book of Revelation 6 12-17:

The Ultimate Cheat Sheet for Reinventing Yourself | James Altucher Here are the rules: I've been at zero a few times, come back a few times, and done it over and over. I've started entire new careers. People who knew me then, don't me now. And so on. I've had to change careers several times. There are other ways to reinvent yourself, so take what I say with a grain of salt. I've seen it work for maybe a few hundred other people. A) Reinvention never stops. Every day you reinvent yourself. B) You start from scratch. Every label you claim you have from before is just vanity. C) You need a mentor. Else, you'll sink to the bottom. D) Three types of mentors Direct. E) Don't worry if you don't have passion for anything. You have passion for your health. F) Time it takes to reinvent yourself: five years. Here's a description of the five years: Year One: you're flailing and reading everything and just starting to DO.Year Two: you know who you need to talk to and network with. Sometimes I get frustrated in years 1-4. Google is a good example. Today. Today. That's fine.