10 Civilizations That Disappeared Under Mysterious Circumstances 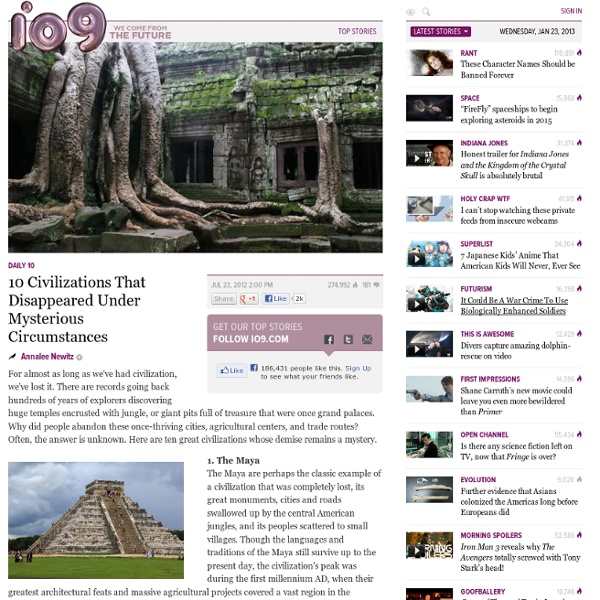 What Thomas Kuhn Really Thought about Scientific “Truth” | Cross-Check In 1991, when I was a staff writer for Scientific American, I wrote a letter to Thomas Kuhn, then at MIT. I said I wanted to profile him for Scientific American and “tell readers how you developed your views of the process of science.” When he didn’t respond, I called. Kuhn was reluctant to do the interview. I finally wore Kuhn down, and in February 1991 I interviewed him for more than three hours in his cluttered office. To commemorate the 50th anniversary of Structure, I’m posting an edited version of my write-up of Kuhn in The End of Science (Addison Wesley, 1996), which draws heavily on my meeting with him. The Structure of Thomas Kuhn “Look,” Thomas Kuhn said. “The book” was The Structure of Scientific Revolutions, which may be the most influential treatise ever written on how science does (or does not) proceed. Given this theme, one might think that Kuhn would have expected his own message to be at least partially misunderstood. But isn’t mathematics a kind of universal language?

'Grand Canyon' Discovered Beneath Antarctic Ice - The drop is so severe and the rift so long, scientists knew they'd found something exciting immediately. - The scientists were hoping to discover why the region had higher-than-average melt. - The rift may be part to blame for the melting. A dramatic gash in the surface of the Earth that could rival the majesty of the Grand Canyon has been discovered secreted beneath Antarctica's vast, featureless ice sheet. Dubbed the Ferrigno Rift for the glacier that fills it, the chasm's steep walls plunge nearly a mile down (1.5 kilometers) at its deepest. PHOTOS: Antarctica Mission: Lost in the Ice The rift was discovered during a grueling 1,500-mile (2,400 km) trek that, save for a few modern conveniences, hearkens back to the days of early Antarctic exploration. Old-school exploration The two-man team set out aboard snowmobiles, dragging radar equipment behind them to measure the topography of the rock beneath the windswept ice, in a region notorious for atrocious weather. Slippery implications

Free ebooks - Project Gutenberg anthropologist: When Same-Sex Marriage Was a Christian Rite Contrary to myth, Christianity's concept of marriage has not been set in stone since the days of Christ, but has constantly evolved as a concept and ritual. Prof. John Boswell, the late Chairman of Yale University’s history department, discovered that in addition to heterosexual marriage ceremonies in ancient Christian church liturgical documents, there were also ceremonies called the "Office of Same-Sex Union" (10th and 11th century), and the "Order for Uniting Two Men" (11th and 12th century). These church rites had all the symbols of a heterosexual marriage: the whole community gathered in a church, a blessing of the couple before the altar was conducted with their right hands joined, holy vows were exchanged, a priest officiatied in the taking of the Eucharist and a wedding feast for the guests was celebrated afterwards. These elements all appear in contemporary illustrations of the holy union of the Byzantine Warrior-Emperor, Basil the First (867-886 CE) and his companion John.

'Britain's Atlantis' found at bottom of North sea - a huge undersea kingdom swamped by a tsunami 5,500 years ago Divers have found traces of ancient land swallowed by waves 8500 years agoDoggerland once stretched from Scotland to DenmarkRivers seen underwater by seismic scansBritain was not an island - and area under North Sea was roamed by mammoths and other giant animalsDescribed as the 'real heartland' of EuropeHad population of tens of thousands - but devastated by sea level rises By Rob Waugh Published: 23:32 GMT, 2 July 2012 | Updated: 10:49 GMT, 3 July 2012 'Britain's Atlantis' - a hidden underwater world swallowed by the North Sea - has been discovered by divers working with science teams from the University of St Andrews. Doggerland, a huge area of dry land that stretched from Scotland to Denmark was slowly submerged by water between 18,000 BC and 5,500 BC. Divers from oil companies have found remains of a 'drowned world' with a population of tens of thousands - which might once have been the 'real heartland' of Europe. A Greater Britain: How the North Sea grew and the land-mass shrunk

American Society for Radiation Oncology The Greatest Speeches In Modern History I Am Prepared To Die, Nelson Mandela One of the most memorable speeches in modern history comes from Nelson Mandela, the man who fought tirelessly against South African apartheid. His revolutionary work, however, had him wrongfully arrested in 1962 on charges of treason and for inciting the public to strike against the government. One-liner: “I have cherished the ideal of a democratic and free society in which all persons live together in harmony and with equal opportunities. Greatest Modern History Speeches: Quit India, Mahatma Gandhi Suppressed under British rule for almost a century, the Quit India movement and Mahatma Gandhi’s subsequent speech prompted the Indian people to fight for their freedom. “In the democracy which I have envisaged, a democracy established by non-violence, there will be equal freedom for all.

Michael Tellinger: 200,000 Year Old Cities Discovered In Africa that Confirm Zecharia Sitchin’s Writings [video] In this fascinating interview with George Noory, scientist and author Michael Tellinger discusses his study of ancient ruins at the southern tip of Africa that are over 200,000 years old. Tellinger believes that the area was once inhabited by ET visitors known as (from the works of Zecharia Sitchin) the Annunaki, who came to Earth to mine gold. The ruins, which he’s investigated along with Johan Heine, consist of thousands of stone structures over a large area. The structures show evidence of their extreme antiquity through erosion and patina growth, he explained. One of the most important ruins Tellinger talks about is known as “Adam’s Calendar” – a monolithic stone calendar that mark time out by the day. The Annunaki tinkered with human genetics to make their mine workers, Tellinger said, referencing the work of Zecharia Sitchin. By studying the area using aerial maps, Tellinger determined there were three great cities, some 60 x 60 miles each, one of which included Great Zimbabwe.

The World's Craziest Popes Pope Formosus (891-896) Source: Blogspot, While Formosus’ pontifical reign is noted more for its brevity than its breadth, it’s the absolute insanity that defined his afterlife that makes him one of the world’s craziest popes. A year following his death, the rather batty Pope Stephen VI ordered Formosus’ desiccated body to be exhumed and put on trial. Known as the Cadaver Synod, Formosus’ corpse was dressed in papal vestments and convicted accordingly.In the ruling, it was declared that Formosus was unworthy of the pontificate, and all acts and measures made under his papacy were declared null and void. Such was the case for three of his fingers, as they had been used in various “illegitimate” consecrations. Pope Sergius III (904-911) Source: All Posters, Pope John XII (955-964)