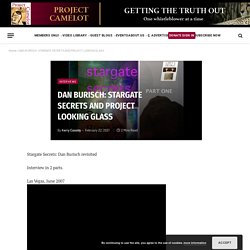 Las Vegas, June 2007 Those familiar with Project Camelot’s work will need no further introduction to Dan Burisch. Understanding Energy Implants and How to Remove Them. Increasingly people within spiritual circles are becoming aware of, and speaking out about, "energetic implants" in our energy fields. 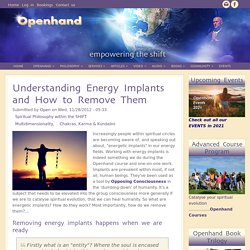 Working with energy implants is indeed something we do during the Openhand course and one-on-one work. Implants are prevalent within most, if not all, human beings. They've been used as a tool by Opposing Consciousness in the 'dumbing-down' of humanity. It's a subject that needs to be elevated into the group consciousness more generally if we are to catalyse spiritual evolution, that we can heal humanity. So what are energetic implants? Removing energy implants happens when we are ready. Breakaway Civilization, Who Built Gobekli Tepe 13,000 Years Ago? Retired CIA, Derrel Sims. Geologists CANT HANDLE THE TRUTH. Elongated skulls. Serpo.org - The Zeta Reticuli Exchange Program (Release 29) Release 29 - The "Yellow Book" and Universe explained (16 June 2008) 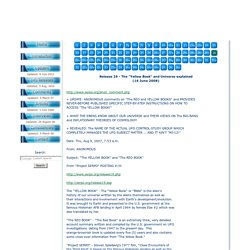 The Ancient Gobekli Tepe Creatures That Are Beyond Anyone's Imagination. Denisovan giants Egypt. The size of a 40.000 year old tooth from the Denisova cave indicates a very tall individual, and artefacts found tell about an unbelievable modern technology - including high speed drilling. 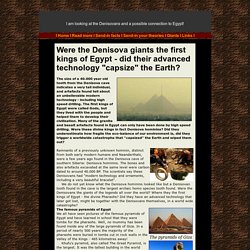 The first kings of Egypt were called Gods, but they lived with the people and helped them to develop their civilisation. Scientists Are Frozen Speechless As Shocking DNA Evidence Reveals Nephilim Existence! Pharaoh Akhenaten. Akhenaten was a Pharaoh of the Eighteenth dynasty who ruled for 17 years and died sometime around 1335 BC. 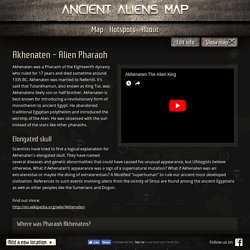 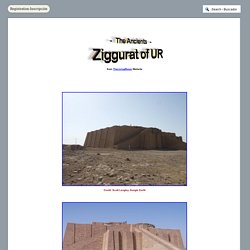 How to Destroy Physical Implants ? - Metatech. Every now and again someone emails me and asks me how to remove physical implants. 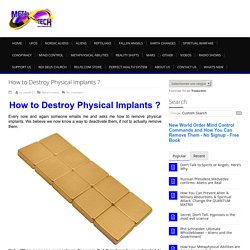 We believe we now know a way to deactivate them, if not to actually remove them. Note: When someone suspects or discovers that they have been subjected to abduction, many times they become worried that they have some type of implant or surveillance device inside their body. Black Knight: Alien satellite captured passing International Space Station AND Moon. The 1998 Nasa image and a picture taken of the Blue Moon in July 2015 Footage which could show the mysterious Black Knight satellite passing the ISS emerged on YouTube following an earlier photograph, which appeared to show it pass the Moon, during July 31's Blue Moon (two full moons in the same month) event, according to alien researchers. 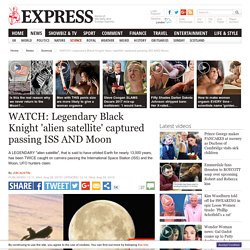 Now a separate clip has emerged said to have been taken on July 31 by another person, which appears to show the object passing the moon on video. Sarah Roth, from the US, posted a link on this story to a YouTube video she uploaded of the sighting filmed from an undisclosed location. She posted with the video: "Last night while taking pictures and video of the Blue Moon, a black object went hurling past.

Could be any number of things from space debris, Black Knight satellite to UFO. " The Black Knight satellite is the name that has been given to a object captured on camera by Nasa astronauts during a 1998 space shuttle mission. Jonathon Gray Out of Place Archeology Discoveries. Planet of the Dolmens, Softened Stone Technique, Ancient Megalithic Dolmens, Forbidden Archaeology. The Great Smithsonian Cover-Up: 18 Giant Skeletons Discovered in Wisconsin. Scientists are remaining stubbornly silent about a lost race of giants found in burial mounds near Lake Delavan, Wisconsin, in May 1912. 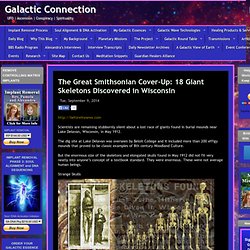 The dig site at Lake Delavan was overseen by Beloit College and it included more than 200 effigy mounds that proved to be classic examples of 8th century Woodland Culture. But the enormous size of the skeletons and elongated skulls found in May 1912 did not fit very neatly into anyone’s concept of a textbook standard. They were enormous. These were not average human beings. Strange Skulls. Ancient Advanced Building Materials and Techniques PART 1, Geopolymers and more... Huge Megalithic Ancient Earth Structure Discovered - UNKNOWN EYE OF THE SAHARA. Giant Megaliths Found in Siberia Could Be Largest in the World. The Phaistos Disk: Viewzone. By Gary Vey Imagine, if you will, that a team of archaeologists in the year 6000 AD are excavating an "ancient" landfill from the 20th Century. 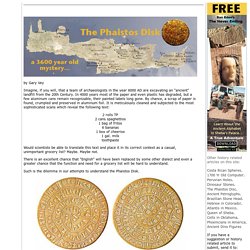 Seen as the "new age of exploration", the 21st century promises to solve some of the most intriguing puzzles of our current history. Credo Mutwa heavily criticizes Michael Tellinger, Sept 2010. Caravan To Midnight - Episode 350 The Greater Pyramids at Bosnia. Secret Underground City of Ellora Caves - Ancient Aliens In India? Ancient Göbekli Tepe Who Built It, When, and Why ? 2.8-Billion-Year-Old Spheres Found in South Africa: How Were They Made? By Tara MacIsaac, Epoch Times. Mysterious Stone Chambers & Giants Discovered in New England- Jim Vieira. 32,000 Year Old Alien City Discovered in India. UFOs: The Human Mutilation Cover Up FULL Film 2014. CROP CIRCLES AMAZING CAPTURED ON FILM. An image from Colin Andrews featuring the Hackpen formation of 1999 The collection of Colin Andrews crop circle photographs from 1983-2004 can be seen on his CD-ROM “Cosmic Artist”.

There are more and more videos about crop circles as they are appearing more frequently. This is an amazing observation of recent crop design creations. Earth time is different than space time. Ten Mysterious Examples of Rock Art from the Ancient World. Rock paintings and engravings are among the world’s oldest continuously practiced art form and are as diverse as the wide-ranging cultures and civilizations that have produced them. Depictions of elegant human figures, richly hued animals, unusual figures combining human and animal features, and detailed geometric patterns, continue to inspire admiration for their sophistication, powerful forms, and detailed representations, as well as for providing a window into the daily lives of our ancient ancestors.

Here we feature some of the most amazing and mysterious examples of rock art from around the world, though there are thousands more that are equally as impressive. 10. Mermaids are real, says the National Oceanic and Atmospheric Administration. Hmm Donno if its True, but when the Govt says it does not exist?? You can seriously Question and think otherwise… And the kenyan article is also missing…. ~ Galactic human ~ Apparently the National Oceanic and Atmospheric Administration (NOAA) published a newsfeed article titled Conclusive Evidence of the Existence of Aquatic Humanoids.

The Fascinating Link Between The Pyramids And Other Worldly Visitors. The Story Of Elongated Skulls And The Denied History Of Ancient People: An Interview With Mark Laplume. The Mystery of the Crystal Skulls. By Chris Morton & Ceri Louise Thomas— Smithsonian Admits to Destruction of Thousands of Giant Human Skeletons in Early 1900′s.

Initial DNA analysis of Paracas elongated skull released – with incredible results. The Mystery of the San Pedro Mountains Mummy. In June 1934, two gold prospectors, who had been digging and blasting for gold within the San Pedro Mountains in Wyoming, came across a small cavern buried deep within the thick rock. Atlantis Found: Giant Sphinxes, Pyramids In Bermuda Triangle (update) By Terrence Aym. Josh Reeves - Red Ice Radio 2013 - The Lost Secrets of Ancient America. Michael Tellinger about the Bosnian Pyramids Ubuntu. The 300,000-Year-Old Nanotechnology Artifacts of Russia. An Oopart (out of place artifact) is a term applied to dozens of prehistoric objects found in various places around the world that, given their level of technology, are completely at odds with their determined age based on physical, chemical, and/or geological evidence.

Ooparts often are frustrating to conventional scientists and a delight to adventurous investigators and individuals interested in alternative scientific theories. In 1991, the appearance of extremely tiny, coil-shaped artifacts found near the banks of Russia’s Kozhim, Narada, and Balbanyu rivers brought about a debate that has continued to this day. A Prehistoric UFO. High winds expose previously unknown Nazca geoglyphs - Galactic ConnectionGalactic Connection.