The Difference between Aliens, Demons and Fallen Angels 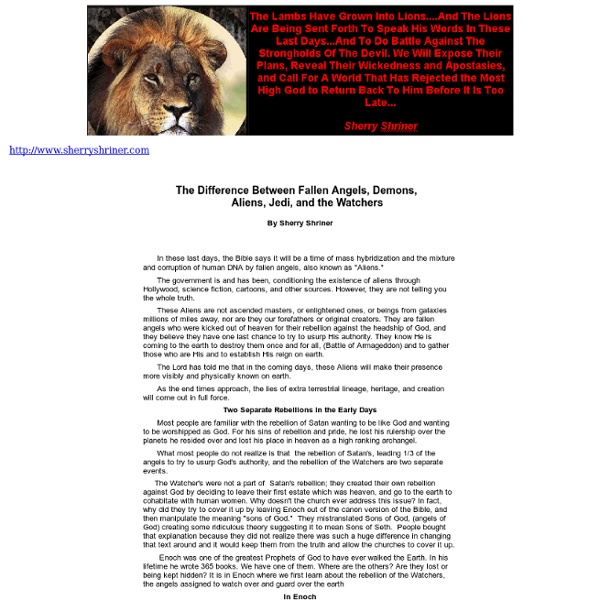 The Difference Between Fallen Angels, Demons, Aliens, Jedi, and the Watchers By Sherry Shriner In these last days, the Bible says it will be a time of mass hybridization and the mixture and corruption of human DNA by fallen angels, also known as "Aliens." The government is and has been, conditioning the existence of aliens through Hollywood, science fiction, cartoons, and other sources. However, they are not telling you the whole truth. These Aliens are not ascended masters, or enlightened ones, or beings from galaxies millions of miles away, nor are they our forefathers or original creators. The Lord has told me that in the coming days, these Aliens will make their presence more visibly and physically known on earth. As the end times approach, the lies of extra terrestrial lineage, heritage, and creation will come out in full force. Two Separate Rebellions in the Early Days Most people are familiar with the rebellion of Satan wanting to be like God and wanting to be worshipped as God.

Simon Peter versus Simon the Sorcerer This is a great expose by the late Dr. E.L. Martin. It documents the true history of the Samaritans, the meaning of the word "peter" in the ancient world and the "church" that was established at Rome by Simon the Sorcerer. "But there was a certain man, called Simon, which beforetime in the same city used sorcery, and bewitched the people of Samaria, giving out that himself was some great one: To whom they all gave heed, from the least to the greatest, saying, This man is the great power of God. And to him they had regard, because that of long time he had bewitched them with sorceries.

Chelsea Handler Makes Peace With Her Grandfather’s Nazi Past Posted by Ancestry.com on August 9, 2013 in Uncategorized …and Finds a Closer Connection to Her Heritage. Born to a Jewish father and German mother, comedienne Chelsea Handler has always embraced her Jewish side. 6 Sick with Norovirus; don’t eat oysters from Copano Bay, TX by Doug Powell The U.S. Food and Drug Administration is warning consumers not to eat raw or partially cooked oysters harvested from Copano Bay, in Aransas County, Texas, harvested between Dec. 26, 2013 and Jan. 9, 2014. Oysters harvested from Copano Bay, Texas, on Dec. 26, 2013, and then shipped by Alby’s Seafood of Fulton, Texas, have been linked to six norovirus illnesses in Louisiana. Snow closes roads in Israel, is a source of wonder in Egypt CAIRO -- Snow coated domes and minarets Friday as a record Middle East storm compounded the suffering of Syrian refugees, sent the Israeli army scrambling to dig out stranded motorists and gave Egyptians a rare glimpse of snow in their capital. Nearly three feet of snow closed roads in and out of Jerusalem, which is set in high hills, and thousands in and around the city were left without power. Israeli soldiers and police rescued hundreds trapped in their cars by snow and ice.

Nuclear Events in Ancient India? Evidence at Mohenjo-Daro When excavations of Harappa and Mohenjo-Daro reached the street level, they discovered skeletons scattered about the cities, many holding hands and sprawling in the streets as if some instant, horrible doom had taken place. People were just lying, unburied, in the streets of the city. 500 Free Movies Online: Great Classics, Indies, Noir, Westerns & More . We also have special collections of . Free Comedy & Dramas 125 Korean Feature Films – Free – The Korean Film Archive has put on YouTube over 100 Korean feature films, including Im Kwon-taek’s Sopyonje and Hong Sangsoo’s The Day the Pig Fell Into a Well. A bonanza for fans of Korean film.70 Movies in HD from Famed Russian Studio Mosfilm – Free – Includes films by Tarkovsky, Eisenstein and Kurosawa, plus Sergei Bondarchuk’s 1969 adaptation of Leo Tolstoy’s War and Peace.

George Clooney’s Honest Family Connection Posted by Ancestry.com on November 7, 2012 in Uncategorized This November, as movie-goers prepare to see Steven Spielberg’s “Lincoln” on the big screen, experts from Ancestry.com have uncovered a family connection between Abraham Lincoln and actor George Clooney. In conjunction with the movie’s release, Ancestry.com is also making its most significant Lincoln-related records available in one place for free viewing. After researching more than three centuries of Abraham Lincoln’s family tree, Ancestry.com family historians have revealed a Lincoln family secret: famous actor George Clooney is related to the former president. The family bloodline for both notable figures links to Lincoln’s maternal grandmother Lucy Hanks. Due to this common ancestor, Clooney is Lincoln’s half-first cousin five times removed.