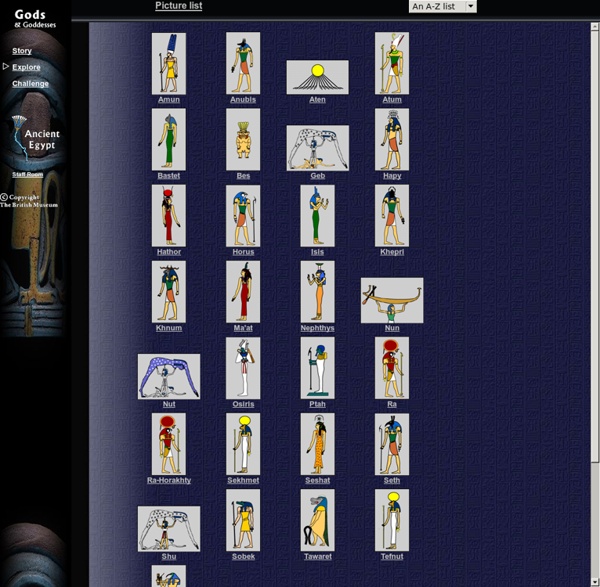 Ancient Egyptian Gods Find out about Egyptian Gods and try our challenge © 2012 This website is produced by the Student Recruitment, Admissions and International Development Division at The University of Manchester Egyptian Mythology - Myth Encyclopedia - god, story, names, ancient, tree, animal, snake, world, Roman, creation Bordered by deserts, Egypt's Nile River valley was relatively isolated from other centers of civilization in the ancient Near East for thousands of years. As a result, Egyptian religion remained almost untouched by the beliefs of foreign cultures. The religion included a large and diverse pantheon of gods and goddesses, and around these deities arose a rich mythology that helped explain the world.

Ancient Egypt Egypt's impact on later cultures was immense. You could say that Egypt provided the building blocks for Greek and Roman culture, and, through them, influenced all of the Western tradition. Today, Egyptian imagery, concepts, and perspectives are found everywhere; you will find them in architectural forms, on money, and in our day to day lives.

Egyptian mythology Egyptian mythology is the collection of myths from ancient Egypt, which describe the actions of the Egyptian gods as a means of understanding the world. The beliefs that these myths express are an important part of ancient Egyptian religion. Myths appear frequently in Egyptian writings and art, particularly in short stories and in religious material such as hymns, ritual texts, funerary texts, and temple decoration. These sources rarely contain a complete account of a myth and often describe only brief fragments. The details of these sacred events differ greatly from one text to another and often seem contradictory.

Parallels between the lives of Jesus and Horus, an Egyptian God Jesus-Pagan links Menu Sponsored link. Quotations: Overview: Some skeptics have suggested that there was, in ancient times, a shared supply of religious myths spread throughout much of the Mediterranean area, the Middle East and beyond. Greek Gods Family Tree / Genealogy Doing homework? Your teacher has already seen this. See Theoi; it has properly-sourced information.