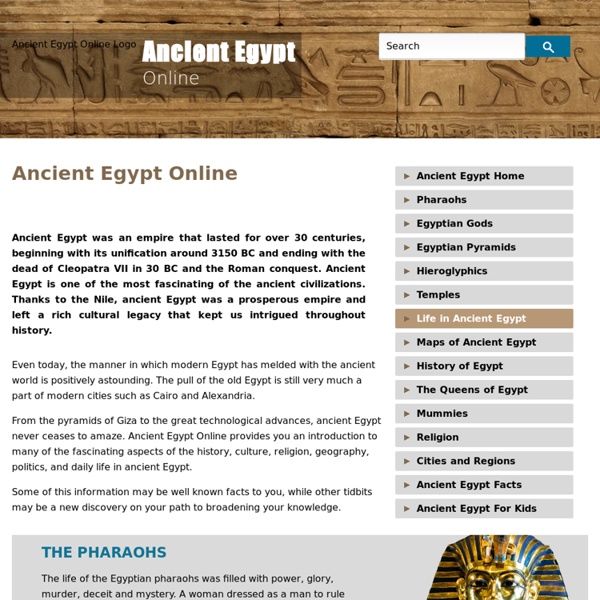 Welcome to Living in Ancient Egypt More Breeds Added! If you have any comments or ideas? Or need any kind of information about Ancient Egypt, please I'll be glad to help you! Webrings Explore Ancient Egypt Explore Ancient Egypt With 360-degree and other imagery, walk around the Sphinx, enter the Great Pyramid, visit tombs and temples, and more. Want to walk around the Sphinx? View From Top You are now standing atop Khufuí­s Pyramid, 45 stories above the Giza Plateau. Other things to look for as you navigate around the summit are the Sphinx, Khufu's three Queens' Pyramids, greater Cairo, and—hard to miss—Khafre's Pyramid. Descending Passage Length: 192 feetWidth: 3.5 feetHeight: 4 feetAfter ducking into the Great Pyramid at its entrance 55 feet up its northern face, you begin working your way carefully down the Descending Passage. Subterranean Chamber Length: 46 feet (planned)Width: 24 feet (planned)Height: 17.5 feet (planned)This unfinished chamber, lying nearly 100 feet below the surface of the Giza Plateau, is closed to the public. Do you see the small grated opening across the room from the entrance? Ascending Passage Okay, let's begin. Grand Gallery (Lower) "Queen's Chamber" King's Chamber

Egypt Pyramids Pharaohs Hieroglyphs - Mark Millmore's Ancient Egypt Discovering Ancient Egypt What the Ancients Knew - Egypt Egyptian pyramids facts and information | Ancient Egypt history. Egyptian pyramids are great monument of a great civilization that was born seven thousand years ago. The ancient Egyptians built more than 90 royal pyramids, from about 2630 BC until about 1530 BC. During that time, the pyramid shape evolved from a series of stepped terraces to sloped pyramidal shape. When were Egyptian pyramids built? The first pyramid, the Step Pyramid at Saqqara, was constructed during the reign of King Djoser (Zoser) (2630 BC-2611 BC). Why were Egyptian pyramids built? Egyptian pyramids were originally built to serve as tombs for kings and queens. How were the Pyramids built? There are many theories of how the pyramids were built but no body knows for sure the process ancient Egyptians followed to build the pyramids. Stones used in the construction process were quarried from remote or local quarries where they were either transported using wooden sleds as the wheel had not yet existed and even it had it wouldn't be of much use due to the heavy weight of the blocks.

Ancient Egypt on a Comparative Method