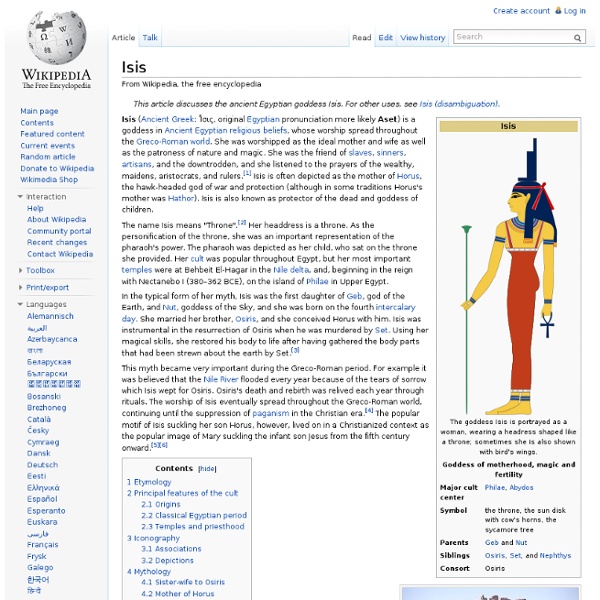 Temple of Isis in Philae, Egypt Isis (Ancient Greek: Ἶσις, original Egyptian pronunciation more likely "Aset" or "Iset") is a goddess in Ancient Egyptian religious beliefs, whose worship spread throughout the Greco-Roman world. She was worshipped as the ideal mother and wife as well as the patroness of nature and magic. She was the friend of slaves, sinners, artisans and the downtrodden, but she also listened to the prayers of the wealthy, maidens, aristocrats and rulers.[1] Isis is often depicted as the mother of Horus, the hawk-headed god of war and protection (although in some traditions Horus's mother was Hathor). Isis is also known as protector of the dead and goddess of children. This myth became very important during the Greco-Roman period. Etymology[edit] The name Isis is the Greek version of her name, with a final -s added to the original Egyptian form because of the grammatical requirements of the Greek language (-s often being a marker of the nominative case in ancient Greek).

Ishtar Ishtar (pronounced /ˈɪʃtɑːr/; Transliteration: DIŠTAR; Akkadian: 𒀭𒈹 ; Sumerian 𒀭𒌋𒁯) is the East Semitic Akkadian, Assyrian and Babylonian goddess of fertility, love, war, and sex.[1] She is the counterpart to the Sumerian Inanna, and is the cognate for the Northwest Semitic Aramean goddess Astarte. Characteristics[edit]

Hathor Hathor (/ˈhæθɔr/ or /ˈhæθər/;[2] Egyptian: ḥwt-ḥr and from Greek: Άθωρ, "mansion of Horus")[1] is an Ancient Egyptian goddess who personified the principles of joy, feminine love, and motherhood.[3] She was one of the most important and popular deities throughout the history of Ancient Egypt. Hathor was worshiped by Royalty and common people alike in whose tombs she is depicted as "Mistress of the West" welcoming the dead into the next life.[4] In other roles she was a goddess of music, dance, foreign lands and fertility who helped women in childbirth,[4] as well as the patron goddess of miners.[5] The cult of Hathor predates the historic period, and the roots of devotion to her are therefore difficult to trace, though it may be a development of predynastic cults which venerated fertility, and nature in general, represented by cows.[6] Hathor is commonly depicted as a cow goddess with horns in which is set a sun disk with Uraeus. Early depictions[edit]

Horus Egyptian war deity Etymology[edit] Nekheny may have been another falcon god worshipped at Nekhen, city of the falcon, with whom Horus was identified from early on. Horus may be shown as a falcon on the Narmer Palette, dating from about the 31st century BC. www.britannica Isis, Egyptian Aset or Eset, one of the most important goddesses of ancient Egypt. Her name is the Greek form of an ancient Egyptian word for “throne.” Top Questions

Kāla (time) Head of Kala carved on top of Kidal temple portal, East Java. Kālá (Sanskrit: काल, IPA: [kɑːˈlə]) is a Sanskrit word which means "Time".[1] It is also the name of a deity in which sense it is not always distinguishable from kāla meaning "black". It often used as one of the various names or forms of Yama. Monier-Williams's widely used Sanskrit-English dictionary[2] lists two distinct words with the form kāla. kāla 1 means "black, of a dark colour, dark-blue ..." and has a feminine form ending in ī – kālī – as mentioned in Pāṇini 4-1, 42.kāla 2 means "a fixed or right point of time, a space of time, time ... destiny, fate ... death" and has a feminine form (found at the end of compounds) ending in ā, as mentioned in the ṛgveda Prātiśākhya. As a traditional Hindu unit of time, one kālá corresponds to 144 seconds.

Khonsu Khonsu, the ancient Egyptian moon-god, was depicted either as a falcon wearing the moon-disk on his head (left) or as the child of Amun and Mut. Khonsu (alternately Chonsu, Khensu, Khons, Chons or Khonshu) is an Ancient Egyptian god whose main role was associated with the moon. His name means "traveller" and this may relate to the nightly travel of the moon across the sky. Along with Thoth he marked the passage of time. Khonsu was instrumental in the creation of new life in all living creatures. At Thebes he formed part of a family triad with Mut as his mother and Amun his father.

Nut Nut often refers to: Nut or Nuts may also refer to: Places Nomenclature of Territorial Units for Statistics, a geocode standard for referencing the subdivisions of countries for statistical purposes in the European UnionThe Nut, a landmark near Stanley, Tasmania Arts, entertainment, and media Comics Isis Isis is a goddess in Egyptian theology. She was the sister and wife of Osiris, and they had a son named Horus. As goddess of life and magic, Isis protected women and children, and healed the sick. Closely linked to the throne, she was one of the greatest goddesses of Ancient Egypt. Her symbols were the ankh, her wings, and her throne headdress.

Ori (Yoruba) Ori is a metaphysical concept important to Yoruba spirituality and philosophy. Ori, literally meaning "head," refers to one's spiritual intuition and destiny. It is the reflective spark of human consciousness embedded into the human essence, and therefore is often personified as an Orisha in its own right . In Yoruba tradition, it is believed that human beings are able to heal themselves both spiritually and physically by working with the Orishas to achieve a balanced character, or iwa-pele. When one has a balanced character, one obtains an alignment with one's Ori or divine self. Fagbemijo Amosun Fakayode.

Thoth Thoth played many vital and prominent roles in Egyptian mythology, such as maintaining the universe, and being one of the two deities (the other being Ma'at) who stood on either side of Ra's boat.[5] In the later history of ancient Egypt, Thoth became heavily associated with the arbitration of godly disputes,[6] the arts of magic, the system of writing, the development of science,[7] and the judgment of the dead.[8] Name[edit] Etymology[edit] The Egyptian pronunciation of ḏḥwty is not fully known, but may be reconstructed as *ḏiḥautī, based on the Ancient Greek borrowing Θώθ [tʰɔːtʰ] Thōth or Theut and the fact that it evolved into Sahidic Coptic variously as Thoout, Thōth, Thoot, Thaut as well as Bohairic Coptic Thōout. According to Theodor Hopfner,[12] Thoth's Egyptian name written as ḏḥwty originated from ḏḥw, claimed to be the oldest known name for the Ibis although normally written as hbj. Further names and spellings[edit]

Khenti-Amentiu The roles of Khenti-Amentiu, Osiris, and Anubis underwent considerable changes in the late Old Kingdom (c. 2686–2181 BC). Originally, only Anubis' name appeared in the offering formula that was believed to allow the dead to partake of the offerings they were given to sustain them in the afterlife. In the Fifth Dynasty (c. 2494–2345 BC), many gods started to appear in the formula, including Osiris, whose name does not appear in any texts before the start of the dynasty, and Khenti-Amentiu. In the course of the late Old Kingdom, the Khenti-Amentiu title becomes more clearly connected with Osiris.[3] The jackal hieroglyph that appears in Khenti-Amentiu's name in the Early Dynastic Period is traditionally seen as a determinative to indicate the god's form, but Terence DuQuesne argued that the jackal glyph represents the name of Anubis and that Khenti-Amentiu was originally an epithet or manifestation of Anubis. See also[edit]

www.ancient Isis is an ancient Egyptian goddess, associated with the earlier goddess Hathor, who became the most popular and enduring of all the Egyptian deities. Her name comes from the Egyptian Eset, ("the seat") which referred to her stability and also the throne of Egypt as she was considered the mother of every pharaoh through the king's association with Horus, Isis' son. Her name has also been interpreted as Queen of the Throne, and her original headdress was the empty throne of her murdered husband Osiris. Baal Bronze figurine of a Baal, ca. 14th–12th century BC, found at Ras Shamra (ancient Ugarit) near the Phoenician coast. Musée du Louvre. "Baal" may refer to any god and even to human officials. Iah Iah ( Egyptian: Jˁḥ, transliterated as Yah, Jah, Jah(w), Joh or Aah [2]) is a god of the moon in ancient Egyptian religion. His name simply means moon. By the New Kingdom he was less prominent as a moon deity than the other gods with lunar connections, Thoth and Khonsu. As a result of the functional connection between them he could be identified with either of those deities. He was sometimes considered an adult form of Khonsu and was increasingly absorbed by him. Iah continued to appear in amulets and occasional other representations, similar to Khonsu in appearance, with the same lunar symbols on his head and occasionally the same tight garments.