Israel passes bill to seize private Palestinian land for Jewish settlements. JERUSALEM — Israel’s parliament passed a contentious law late Monday that allows the state to seize land privately owned by Palestinians in the West Bank and grant the properties to Jewish settlements for their exclusive use. 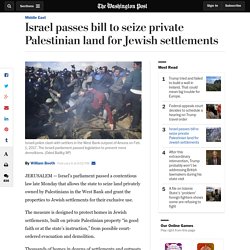 The measure is designed to protect homes in Jewish settlements, built on private Palestinian property “in good faith or at the state’s instruction,” from possible court-ordered evacuation and demolition. Thousands of homes in dozens of settlements and outposts may now be protected, at least temporarily. The bill is probably headed for a high court challenge. world middle_east Dallas shooting updates News and analysis on the deadliest day for police since 9/11. post_newsletter353 follow-dallas true after3th false.

More than half US aid goes to Israel and its gov't ignores our warnings on settlements. John Kerry offered yet another tough-love talk to Israel at the pro-Israel Saban Forum yesterday. 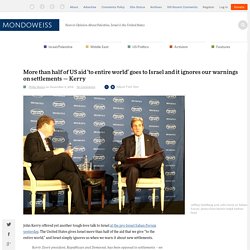 The United States gives Israel more than half of the aid that we give “to the entire world,” and Israel simply ignores us when we warn it about new settlements. Kerry: Every president, Republican and Democrat, has been opposed to settlements – we issue a warning today when we see a new settlement announced. Nothing happens. It’s ignored, a new settlement goes up. New units, new sales. Here’s how much money we give Israel to ignore us.

I’ve watched while we, the Obama Administration, have put $23.5 billion on the line for foreign military financing. Israel stole classified US information and used it to help congressional Republicans. The Wall Street Journal's Adam Entous dropped a huge story Tuesday morning: Israel acquired classified US information while spying on the Iranian nuclear negotiations, and leaked the stolen information about the emerging deal to American lawmakers in an attempt to sabotage the Obama administration's outreach to Tehran. 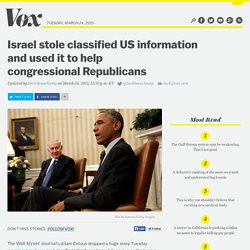 Netanyahu’s victory is a disaster for the peace process. There's no sugar-coating this: Prime Minister Benjamin Netanyahu's stunning victory in Tuesday's Israeli election is an utter disaster for Israel's peace camp and, by extension, the Palestinians. 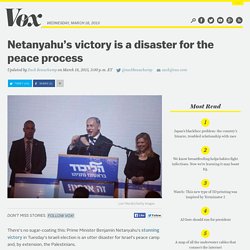 The right-wing prime minister won on the back of an ultra-hawkish, at times nakedly racist campaign. He openly declared that there'd be no Palestinian state on his watch if reelected. He warned of Arab voters "streaming in huge quantities to the polling stations," which is a lot like an American politician warning about too many black voters turning out.

What does it say about Israel, and the conflict, that his campaign worked? The answer is clear. This election proves, beyond a shadow of a doubt, that Israel's traditional pro-peace leftist majority is well and truly dead. The left's long death Isaac Herzog, head of the Labor party, looking not-thrilled at a post-election event. By all rights, Netanyahu should have lost this election. At last Israel tells the truth about why so many civilians are being killed in Gaza. Israel explains why its bombs and shells are slaughtering civilians in Gaza. 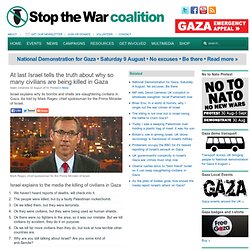 The story shared by Israel and Palestine has been told in several stunning films, but I don’t think I’ve ever seen it told like this. 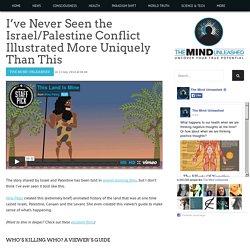 Nina Paley created this (extremely brief) animated history of the land that was at one time called Israel, Palestine, Canaan and the Levant. She even created this viewer’s guide to make sense of what’s happening. (Want to dive in deeper? Check out these excellent films.) Who’s Killing Who? Because you can’t tell the players without a pogrom! Early Man. Israel orders demolition of 8 Palestinian villages, claims need for IDF training land. Global Nukes Infographic. US House Stealthily Passes Extreme Pro-Israel Legislation. The House bill basically provides Israel with a blank check drawn on the U.S. taxpayer to maintain its “qualitative military edge” over all of its neighbors combined. 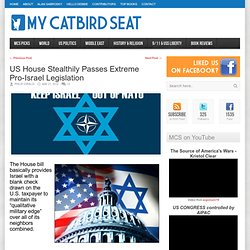 Go to Google and type in “H.R. 4133.” You will discover that, apart from a handful of blogs and alternative news sites, not a single mainstream medium has reported the story of a congressional bill that might well have major impact on the conduct of United States foreign policy. Settlers make fun of the Palestinian woman after the occupation authorities force her out of her home in the Sheikh Jarrah neighborhood in Jerusalem. : pics. Israel airport security demands access to tourists' private email accounts. Palestinians prepare to lose the solar panels that provide a lifeline. Two large solar panels jut out of the barren landscape near Imneizil in the Hebron hills. 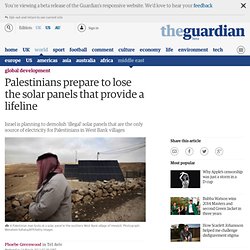 The hi-tech structures sit incongruously alongside the tents and rough stone buildings of the Palestinian village, but they are fundamental to life here: they provide electricity. Imneizil is not connected to the national electricity grid. American Taxpayers Subsidize Israel’s Prosperity by Alison Weir. Israel’s Jerusalem Post newspaper recently published an article calling Israel “The New Golden Country” for young people from around the world.

It reports that Israel boasts an ever-increasing GDP, a strong currency, and “a lower unemployment rate than the U.S.” The article fails to mention the well over $3 billion a year that American taxpayers have given Israel for years, nor the fact that some of this money has been used to develop industries that compete with U.S. companies, costing thousands of American jobs and adding to the American unemployment rate. UN report: Israel confiscated 35% of Jerusalem territories for settlements. U.S. human rights report slams Israel's conduct toward asylum seekers. Palestinian problems. Israel threatens unilateral steps if UN recognizes Palestinian state. Palestinian killed in Israeli raid - Middle East. Israeli troops have shot dead a sleeping Palestinian man during a dawn raid in the city of Hebron in the occupied West Bank. 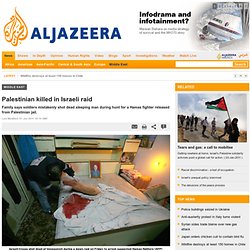 Family members found Omar al-Qawasmeh, 66, in a pool of blood in the bedroom after soldiers broke into several homes in the city's al-Sheikh neighbourhood on Friday. The raid came less than 24 hours after six Hamas fighters who had been on hunger strike in Palestinian jails were released on Thursday. Five of them were from Hebron, and one of them, Wael Bitar, arrested by the Israelis, lived one storey below the victim, residents said. "I was praying when they entered. I do not know how they opened the door. "I was shocked. Later, the Israeli army issued a statement acknowedging that al-Qawasmeh's killing was unintended.

An Israeli military spokesman told the AFP news agency: "There is no indication that [al-Qawasmeh] was involved in any terror activity at any stage and therefore we regret the incident. " Shot at close range Gaza targets hit. WikiLeaks: Israel aimed to keep Gaza economy on brink of collapse. Auschwitz survivor: ‘Israel acts like Nazis’ - Herald Scotland.

Dr Hajo Meyer, 86, who survived 10 months in the Nazi death camp, spoke out as his 10-day tour of the UK and Ireland – taking in three Scottish venues – got under way. His comments sparked a furious reaction from hardline Jewish lobby groups, with Dr Meyer branded an “anti-Semite” and accused of abusing his position as a Holocaust survivor. US activist's family sue Israel - Middle East. Pentagon in charge of aid to Israel? Republicans considering transferring Israeli security aid budget from State Department to Pentagon, in order to ensure it continues while enabling them to stop money flow to other countries. Palestinians pay the higher price.