TfL 'Bars' Adverts From Zionist Group Comparing Hamas To ISIS. Convenient genocide: Another failed war to re-arrange the Middle East. A few months ago, not many Americans, in fact Europeans as well, knew that a Yazidi sect in fact existed in northwest Iraq. 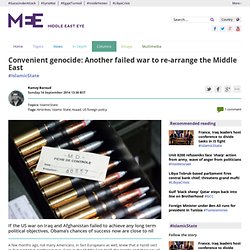 Even in the Middle East itself, the Yazidis and their way of life have been an enigma, shrouded by mystery and mostly grasped through stereotypes and fictitious evidence. Yet in no time, the fate of the Yazidis became a rally cry for another US-led Iraq military campaign. It was not a surprise that the small Iraqi minority found itself a target for fanatical Islamic State (IS) militants, who had reportedly carried out unspeakable crimes against Yazidis, driving them to Dohuk, Irbil and other northern Iraqi regions. According to UN and other groups, 40,000 Yazidi had been stranded on Mount Sinjar, awaiting imminent “genocide” if the US and other powers didn’t take action to save them. When US special forces arrived to the top of Mount Sinjar, they realized that the Yazidis had either been rescued by Kurdish militias, or were already living there. Israeli Supreme Court upholds law allowing housing discrimination against Palestinians – Mondoweiss. UK Parliament Will Vote To Recognize The State Of PalestineFalastin News. 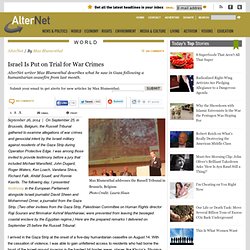 Join our email list: Stay up to date with the latest headlines via email. On September 25, in Brussels, Belgium, the Russell Tribunal gathered to examine allegations of war crimes and genocidal intent by the Israeli military against residents of the Gaza Strip during Operation Protective Edge. Hamas says it will back any Palestinian bid to join international criminal court. People Are Blocking Cargo Ships to Protest Israel. A sign at the August 16 protest at the Port of Oakland. 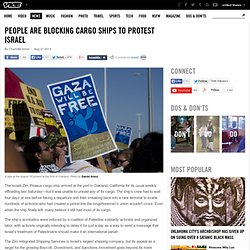 Photo by Daniel Arauz The Israeli Zim Piraeus cargo ship arrived at the port in Oakland, California for its usual weekly offloading last Saturday—but it was unable to unload any of its cargo. The ship’s crew had to wait four days at sea before faking a departure and then sneaking back into a new terminal to evade hundreds of activists who had created a picket line the longshoremen's union wouldn't cross. Even when the ship finally left, many believe it still had most of its cargo. The ship’s acrobatics were induced by a coalition of Palestine solidarity activists and organized labor, with activists originally intending to delay it for just a day as a way to send a message that Israel’s treatment of Palestinians should make it an international pariah. Justice for Gaza war crimes? Only if Palestine signs up to ICC jurisdiction. The Bar Human Rights Committee wrote to the ICC's chief prosecutor, Fatou Bensouda. 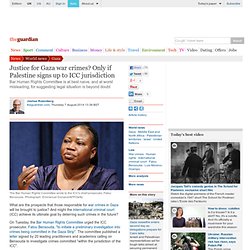 Photograph: Emmanuel Dunand/AFP/Getty What are the prospects that those responsible for war crimes in Gaza will be brought to justice? And might the international criminal court (ICC) achieve its ultimate goal by deterring such crimes in the future? On Tuesday, the Bar Human Rights Committee urged the ICC prosecutor, Fatou Bensouda, "to initiate a preliminary investigation into crimes being committed in the Gaza Strip". Against the war: the movement that dare not speak its name in Israel. Gideon Levy doesn't want to meet in a coffee bar in Tel Aviv. 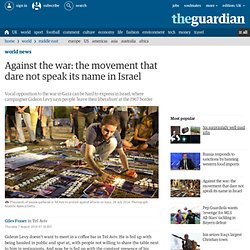 He is fed up with being hassled in public and spat at, with people not willing to share the table next to him in restaurants. And now he is fed up with the constant presence of his bodyguards, not least because they too have started giving him a hard time about his political views. Israel launches fresh air strikes in Gaza in response to rocket fire. Blown chances in Gaza. Alongside the toll of death and broken lives, perhaps the saddest reality of the latest Gaza war, like the Gaza wars before it, is how easy it would have been to avoid. 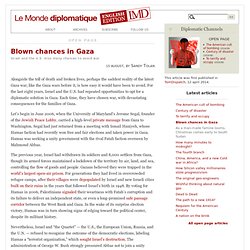 For the last eight years, Israel and the U.S. had repeated opportunities to opt for a diplomatic solution in Gaza. Each time, they have chosen war, with devastating consequences for the families of Gaza. Let’s begin in June 2006, when the University of Maryland’s Jerome Segal, founder of the Jewish Peace Lobby, carried a high-level private message from Gaza to Washington. Segal had just returned from a meeting with Ismail Haniyeh, whose Hamas faction had recently won free and fair elections and taken power in Gaza. Jewish Chronicle Apologises After Readers Object To Gaza DEC Appeal Advert. The Jewish Chronicle has been forced to apologise for running a humanitarian advert for the DEC Gaza appeal, after readers strongly objected to the promotion in the paper. 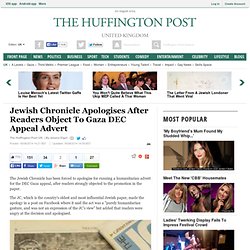 The JC, which is the country's oldest and most influential Jewish paper, made the apology in a post on Facebook where it said the act was a "purely humanitarian gesture, and was not an expression of the JC's view" but added that readers were angry at the decision and apologised. The advert that appeared in the paper "In response, the JC will be giving space in next week's issue to readers wishing to express their objection to the advert. Israel bans national service with rights group B'Tselem in Gaza row.

IDF soldiers at a checkpoint in Bethlehem, West Bank. 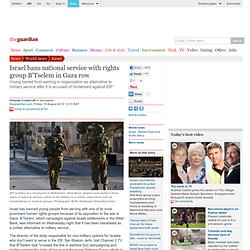 Rockets fired from Gaza as ceasefire expires with no deal on extension. At least 10 rockets have been fired from Gaza towards Israel after Hamas refused to extend a 72-hour ceasefire that expired at 8am local time on Friday. 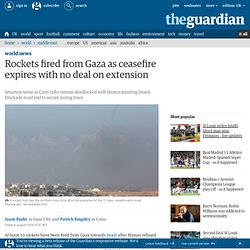 Israel said it had made no response to “multiple attacks”. At least one rocket appeared to have fallen short, landing in Gaza itself. It was unclear whether Hamas or the independent but allied group Palestinian Islamic Jihad was responsible for launching the rockets. Hamas officials in Gaza on Thursday threatened to restart hostilities if their demands were not met in indirect negotiations with Israel that have continued in Cairo for most of the week.

As Friday dawned there was no word of progress. The Palestinian delegation in Cairo have demanded an Israeli-Egyptian blockade of Gaza must be lifted and Israel must free about 100 prisoners to secure a further truce. In praise of… Haaretz. Against the war: the movement that dare not speak its name in Israel.