Israel and the Middle-East

Other religions in the Middle-East. Technology and politics. Nations in the Middle-East. Muslim community. Sexuality in Islam. Arab Spring. A Recipe for Freedom - By F.W. de Klerk. I would like to address some of the lessons that we have learned in South Africa -- lessons that might be helpful to all the countries around the world that are in the process of transition, that strive to clamp down on violence, that hope to fight poverty and improve the quality of life of all their people, that aim to move towards democracy and to bring freedom to their people. 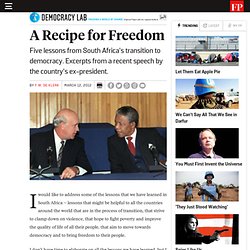 I don't have time to elaborate on all the lessons we have learned, but I want to mention five. First, if you want to break out of the cycle of violence, if you want to lay the foundations for a more prosperous society, if you want to democratize, then the departure point is that leaders must become convinced that fundamental change is necessary. This happened in South Africa. I and my fellow leaders in the National Party became convinced that we had to change.

We could not improve apartheid. So we were convinced that we had to change fundamentally, to make a 180-degree turn. This happened in South Africa. Paul Berman: The Thought Police. Anthony Shadid Interview with Dave Kindred: A: Newsmakers. This is a picture of Anthony Shadid, the foreign correspondent. 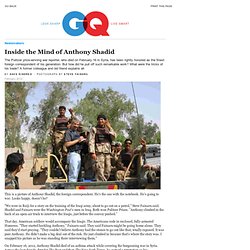 He's the one with the notebook. He's going to war. Looks happy, doesn't he? "We were in Baiji for a story on the training of the Iraqi army, about to go out on a patrol," Steve Fainaru said. Shadid and Fainaru were the Washington Post's men in Iraq. "The Arab Springtime of Nations?" by Shlomo Avineri. Exit from comment view mode. 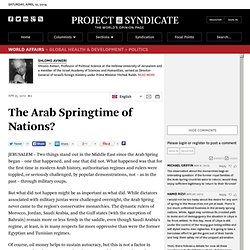 Click to hide this space JERUSALEM – Two things stand out in the Middle East since the Arab Spring began – one that happened, and one that did not. What happened was that for the first time in modern Arab history, authoritarian regimes and rulers were toppled, or seriously challenged, by popular demonstrations, not – as in the past – through military coups. But what did not happen might be as important as what did. While dictators associated with military juntas were challenged overnight, the Arab Spring never came to the region’s conservative monarchies. Of course, oil money helps to sustain autocracy, but this is not a factor in Morocco and Jordan. The Orientalist Connector. Egyptian entrepreneur Shafik Gabr reveals his vast collection of Orientalist art As world attention is still riveted with the ‘Arab Spring’, how is cultural dialogue between East and West faring? 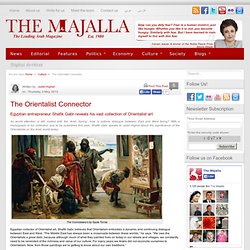 Arabs Looking Forwards to a Brighter Future. Field Marshal Abdel-Rahman Suwar Al-Dahab: The former president of Sudan gives his views on the Arab Spring, Political Islam, and the potential for democracy in the Arab world. 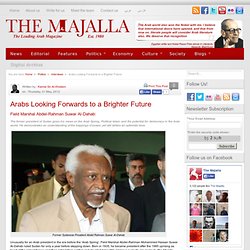 He demonstrates an understanding of the trappings of power, yet still strikes an optimistic tone. Former Sudanese President Abdel Rahman Suwar Al-Dahab Unusually for an Arab president in the era before the ‘Arab Spring’, Field Marshal Abdel-Rahman Mohammed Hassan Suwar Al-Dahab ruled Sudan for only a year before stepping down. A Question of Interpretation. Shirin Ebadi: “Democracy means the government considers the rights of minorities.” 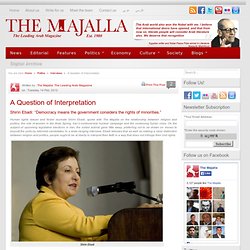 Human rights lawyer and Nobel laureate Shirin Ebadi, spoke with The Majalla on the relationship between religion and politics, the role of women in the Arab Spring, Iran’s controversial nuclear campaign and the continuing Syrian crisis. On the subject of upcoming legislative elections in Iran, the exiled activist gave little away, preferring not to be drawn on moves to boycott the polls by reformist candidates. In a wide-ranging interview, Ebadi stresses that as well as making a clear distinction between religion and politics, people ought to be at liberty to interpret their faith in a way that does not infringe their civil rights.

Shirin Ebadi. The Myth of Middle East Reporting. The tragic death of Anthony Shadid and Marie Colvin, two celebrated American reporters in chaotic Syria last month, has generated due tributes from colleagues and readers who admired their Middle East coverage over more than two decades. 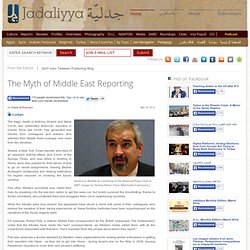 Shadid, a New York Times reporter, who died of an apparent asthma attack, and Colvin of the Sunday Times, who was killed in shelling in Homs, were also praised for their sense of duty to go on secret assignments, braving Bashar Al-Assad's dictatorship and defying restrictions his regime imposed on covering the Syrian uprising. Few other Western journalists also risked their lives by sneaking into the war-torn nation to get the news out, but luckily survived the bloodletting, thanks to Syrian volunteers, who protected them and smuggled them out to neighboring countries. "There's something faintly colonialist about all this," he wrote. Obama’s Middle East Malady - Zaki Laidi. Exit from comment view mode. 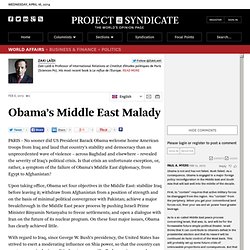 Click to hide this space PARIS – No sooner did US President Barack Obama welcome home American troops from Iraq and laud that country’s stability and democracy than an unprecedented wave of violence – across Baghdad and elsewhere – revealed the severity of Iraq’s political crisis. The Perils of Wishful Thinking: On Europe and the Middle East. Forecasting political events is always risky because chance plays such a decisive role in what becomes history. 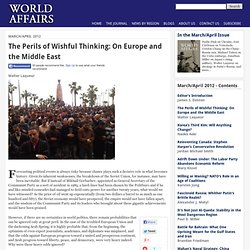 Given its inherent weaknesses, the breakdown of the Soviet Union, for instance, may have been inevitable. But if instead of Mikhail Gorbachev, appointed as General Secretary of the Communist Party as a sort of accident in 1985, a hard-liner had been chosen by the Politburo and if he and like-minded comrades had managed to hold onto power for another twenty years, what would we have witnessed? As the price of oil went up exponentially (from two dollars a barrel to as much as one hundred and fifty), the Soviet economy would have prospered, the empire would not have fallen apart, and the wisdom of the Communist Party and its leaders who brought about these gigantic achievements would have been praised. However, if there are no certainties in world politics, there remain probabilities that can be ignored only at great peril.

Related Essay The Cold War: Is it finally over? The Future of the Marjayia.