Students offered grants if they tweet pro-Israeli propaganda - Middle East. The students making the posts will not reveal online that they are funded by the Israeli government, according to correspondence about the plan revealed in the Haaretz newspaper. Prime Minister Benjamin Netanyahu’s office, which will oversee the programme, confirmed its launch and wrote that its aim was to “strengthen Israeli public diplomacy and make it fit the changes in the means of information consumption”. The government’s hand is to be invisible to the foreign audiences. Daniel Seaman, the official who has been planning the effort, wrote in a letter on 5 August to a body authorising government projects that “the idea requires not making the role of the state stand out and therefore it is necessary to adhere to great involvement of the students themselves, without political linkage or affiliation”.

But Alon Liel, the doveish former director-general of the Israeli foreign ministry, criticised the plan as “quite disgusting”. “University students should be educated to think freely. Judaism: A Threat to Humanity. Judaism, like all of the “revealed”/hearsay man-made religions, breaks the people of the world down to “us versus them.” 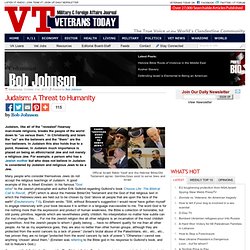 In Christianity and Islam the “us” are the believers and the “them” are the non-believers. In Judaism this also holds true to a point. However, in Judaism much importance is placed on being an ethnic/racial Jew and not merely a religious Jew. For example, a person who has a Jewish mother but who does not believe in Judaism is considered by Judaism and religious Jews to be a Jew. Many people who consider themselves Jews do not accept the religious teachings of Judaism. On page 146 of Gutkind’s Choose Life: The Biblical Call to Revolt we see just how racial/ethnic Judaism is.

This sense of race/ethnicity of Judaism can go a long way in explaining why the Hebrew Bible/Old Testament is so loaded with hate for Gentiles and why it teaches Jews a false sense of Jewish superiority. Related Posts: Short URL: 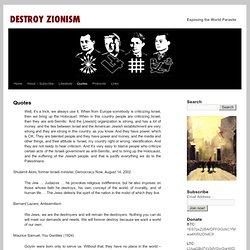 When from Europe somebody is criticizing Israel, then we bring up the Holocaust. When in this country people are criticizing Israel, then they are anti-Semitic. And the [Jewish] organization is strong, and has a lot of money, and the ties between Israel and the American Jewish establishment are very strong and they are strong in this country, as you know. And they have power, which is OK. Safe Non Surgical Adult Male Circumcision. No injected anesthesia. 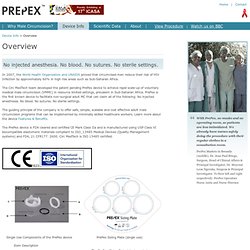 No blood. No sutures. No sterile settings. In 2007, the World Health Organization and UNAIDS proved that circumcised men reduce their risk of HIV Infection by approximately 60% in high risk areas such as Sub-Saharan Africa. The Circ MedTech team developed the patent pending PrePex device to achieve rapid scale-up of voluntary medical male circumcision (VMMC) in resource limited settings, prevalent in Sub-Saharan Africa. The guiding principle of the company is to offer safe, simple, scalable and cost effective adult male circumcision programs that can be implemented by minimally skilled healthcare workers. The PrePex device is FDA cleared and certified CE Mark Class IIa and is manufactured using USP Class VI biocompatible elastomeric materials compliant to ISO_13485 Medical Devices (Quality Management systems) and FDA, 21 CFR177. 2600. With PrePex, no masks and no operating room, so patients are less intimidated. 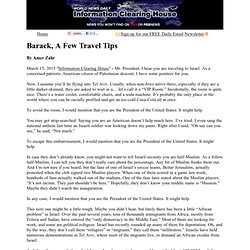 President, I hear you are traveling to Israel. As a concerned patriotic American citizen of Palestinian descent, I have some pointers for you. Now, I assume you’ll be flying into Tel Aviv. To avoid the room, I would mention that you are the President of the United States. Israel belongs to the Rothschilds. What Goes Around Comes Around. War and Natural Gas: The Israeli Invasion and Gaza’s Offshore Gas Fields. More than five years ago, Israel invaded Gaza under “Operation Cast Lead”. 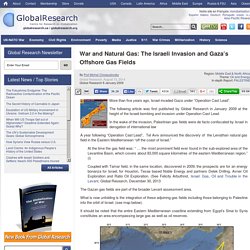 The following article was first published by Global Research in January 2009 at the height of the Israeli bombing and invasion under Operation Cast Lead. Palestinian Loss of Land from 1946 to 2000. Wikipedia - Israel Is Training Internet Workers To Manipulate Online Content. Jimmy Carter unveils truth about Israel. Are American Jews falling out of love with Israel?     Build up to WW3 - CIA Predicts War By June! Iran Pledges Revenge Against EU Embargo.