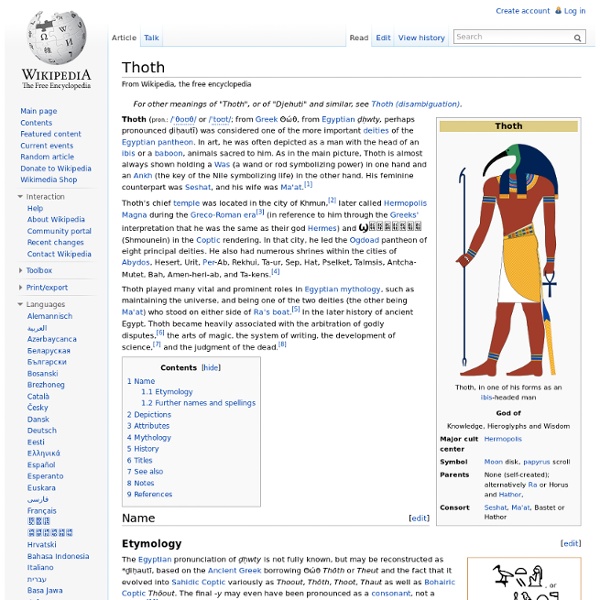 Thoth played many vital and prominent roles in Egyptian mythology, such as maintaining the universe, and being one of the two deities (the other being Ma'at) who stood on either side of Ra's boat.[5] In the later history of ancient Egypt, Thoth became heavily associated with the arbitration of godly disputes,[6] the arts of magic, the system of writing, the development of science,[7] and the judgment of the dead.[8] Name[edit] Etymology[edit] The Egyptian pronunciation of ḏḥwty is not fully known, but may be reconstructed as *ḏiḥautī, based on the Ancient Greek borrowing Θώθ [tʰɔːtʰ] Thōth or Theut and the fact that it evolved into Sahidic Coptic variously as Thoout, Thōth, Thoot, Thaut as well as Bohairic Coptic Thōout. According to Theodor Hopfner,[12] Thoth's Egyptian name written as ḏḥwty originated from ḏḥw, claimed to be the oldest known name for the Ibis although normally written as hbj. Further names and spellings[edit] Depictions[edit] Attributes[edit] Mythology[edit] History[edit]

Sekhmet In Egyptian mythology, Sekhmet /ˈsɛkˌmɛt/[1] or Sachmis (/ˈsækmɨs/; also spelled Sakhmet, Sekhet, or Sakhet, among other spellings) was originally the warrior goddess as well as goddess of healing for Upper Egypt, when the kingdom of Egypt was divided. She is depicted as a lioness, the fiercest hunter known to the Egyptians. It was said that her breath formed the desert. Sekhmet also is a Solar deity, sometimes called the daughter of the sun god Ra and often associated with the goddesses Hathor and Bast. Etymology[edit] Sekhmet's name comes from the Ancient Egyptian word "sekhem" which means "power or might". History[edit] Bust of the Goddess Sakhmet, ca. 1390-1352 B.C.E. The warrior goddess Sekhmet, shown with her sun disk and cobra crown from a relief at the Temple of Kom Ombo. In order to placate Sekhmet's wrath, her priestesses performed a ritual before a different statue of the goddess on each day of the year. Festivals and evolution[edit] In popular culture[edit] See also[edit]

Ammit Ammit (/ˈæmɨt/; "devourer" or "soul-eater"; also spelled Ammut or Ahemait) was a female demon in ancient Egyptian religion with a body that was part lion, hippopotamus and crocodile—the three largest "man-eating" animals known to ancient Egyptians. A funerary deity, her titles included "Devourer of the Dead", "Eater of Hearts", and "Great of Death". Ammit lived near the scales of justice in Duat, the Egyptian underworld. In the Hall of Two Truths, Anubis weighed the heart of a person against the feather of Ma'at, the goddess of truth, which was depicted as an ostrich feather (the feather was often pictured in Ma'at's headdress). If the heart was judged to be not pure, Ammit would devour it, and the person undergoing judgement was not allowed to continue their voyage towards Osiris and immortality. Once Ammit swallowed the heart, the soul was believed to become restless forever; this was called "to die a second time". See also[edit] References[edit]

Apep Development[edit] Ra was the solar deity, bringer of light, and thus the upholder of Ma'at. Apep was viewed as the greatest enemy of Ra, and thus was given the title Enemy of Ra. Also, comparable hostile snakes as enemies of the sun god existed under other names (in the Pyramid Texts and Coffin Texts) already before the name Apep occurred. The etymology of his name (ꜥꜣpp) is perhaps to be sought in some west-semitic language where a word root ꜣpp meaning 'to slither' existed. A verb root ꜥꜣpp does at any rate not exist elsewhere in Ancient Egyptian. Battles with Ra[edit] Set speared Apep The sun god Ra, in the form of Great Cat, slays the snake Apep[5] Tales of Apep's battles against Ra were elaborated during the New Kingdom.[6] Since everyone can see that the sun is not attacked by a giant snake during the day, every day, storytellers said that Apep must lie just below the horizon. In a bid to explain certain natural phenomena it was said that occasionally Apep got the upper hand.

Egyptian mythology Egyptian mythology is the collection of myths from ancient Egypt, which describe the actions of the Egyptian gods as a means of understanding the world. The beliefs that these myths express are an important part of ancient Egyptian religion. Myths appear frequently in Egyptian writings and art, particularly in short stories and in religious material such as hymns, ritual texts, funerary texts, and temple decoration. The details of these sacred events differ greatly from one text to another and often seem contradictory. Mythology profoundly influenced Egyptian culture. Origins[edit] The development of Egyptian myth is difficult to trace. Another possible source for mythology is ritual. In private rituals, which are often called "magical", the myth and the ritual are particularly closely tied. Much of Egyptian mythology consists of origin myths, explaining the beginnings of various elements of the world, including human institutions and natural phenomena. Definition and scope[edit]

Ancient Egypt: the Mythology and egyptian myths Eye of Horus The Wedjat, later called The Eye of Horus The Eye of Horus is an ancient Egyptian symbol of protection, royal power and good health. The eye is personified in the goddess Wadjet (also written as Wedjat,[1][2][3] or "Udjat",[4] Uadjet, Wedjoyet, Edjo or Uto[5]). It is also known as ''The Eye of Ra''.[6] Funerary amulets were often made in the shape of the Eye of Horus. The Wadjet or Eye of Horus is "the central element" of seven "gold, faience, carnelian and lapis lazuli" bracelets found on the mummy of Shoshenq II.[3] The Wedjat "was intended to protect the pharaoh [here] in the afterlife"[3] and to ward off evil. Horus[edit] Horus was the ancient Egyptian sky god who was usually depicted as a falcon, most likely a lanner or peregrine falcon.[10] His right eye was associated with the sun god, Ra. The eye as hieroglyph and symbol[edit] Mathematics[edit] Arithmetic values represented by parts of the Eye of Horus Fractions drawn as portions of a square. The right side of the eye = 1/2