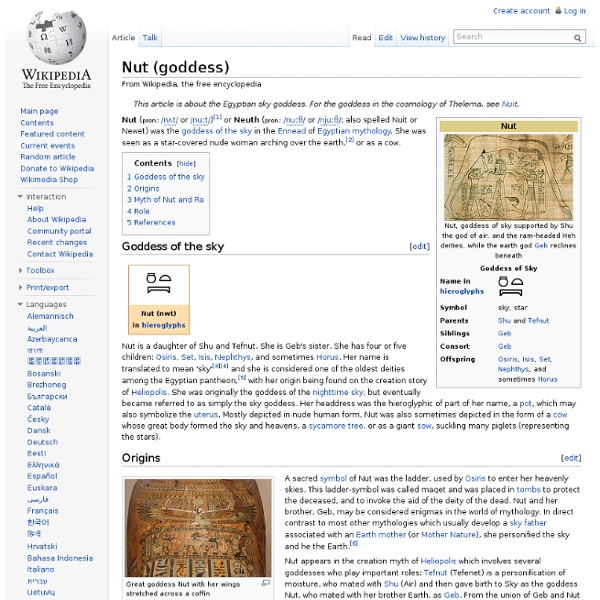 Nut (/nʌt/ or /nuːt/)[1] or Neuth (/nuːθ/ or /njuːθ/; also spelled Nuit or Newet) was the goddess of the sky in the Ennead of Egyptian mythology. She was seen as a star-covered nude woman arching over the earth,[2] or as a cow. Great goddess Nut with her wings stretched across a coffin A sacred symbol of Nut was the ladder, used by Osiris to enter her heavenly skies. This ladder-symbol was called maqet and was placed in tombs to protect the deceased, and to invoke the aid of the deity of the dead. A huge cult developed about Osiris that lasted well into Roman times. The sky goddess Nut depicted as a cow Ra, the sun god, was the second to rule the world, according to the reign of the gods. Some of the titles of Nut were: Nut was the goddess of the sky and all heavenly bodies, a symbol of protecting the dead when they enter the after life. Collier, Mark and Manley, Bill.

Shu (Egyptian deity) As the air, Shu was considered to be cooling, and thus calming, influence, and pacifier. Due to the association with air, calm, and thus Ma'at (truth, justice and order), Shu was portrayed in art as wearing an ostrich feather. Shu was seen with between one and four feathers. In a much later myth, representing the terrible weather disaster at the end of the Old Kingdom, it was said that Tefnut and Shu once argued, and Tefnut left Egypt for Nubia (which was always more temperate). It was said that Shu quickly decided that he missed her, but she changed into a cat that destroyed any man or god that approached. Thoth, disguised, eventually succeeded in convincing her to return. He carries an ankh, the symbol of life. Hans Bonnet: Lexikon der ägyptischen Religionsgeschichte, Berlin 2000, ISBN 3-937872-08-6, S. 685-689 → ShuAdolf Erman: Die Aegyptische Religion, Verlag Georg Reimer, Berlin 1909Wolfgang Helck: Kleines Lexikon der Ägyptologie, 1999 ISBN 3-447-04027-0, S. 269f. → Shu

Amun "Amen Ra" redirects here. For the Belgian band, see Amenra. Amun (also Amon (/ˈɑːmən/), Amen; Ancient Greek: Ἄμμων Ámmōn, Ἅμμων Hámmōn) was a major Egyptian deity. After the rebellion of Thebes against the Hyksos and with the rule of Ahmose I, Amun acquired national importance, expressed in his fusion with the Sun god, Ra, as Amun-Ra. Early history Amun rose to the position of tutelary deity of Thebes after the end of the First Intermediate Period, under the 11th dynasty. Temple at Karnak The history of Amun as the patron god of Thebes begins in the 20th century BC, with the construction of the Precinct of Amun-Re at Karnak under Senusret I. Major construction work in the Precinct of Amun-Re took place during the 18th dynasty when Thebes became the capital of the unified Ancient Egypt. Amon-Ra (l'esprit des quatre elements, lame du monde matérial),N372.2., Brooklyn Museum New Kingdom Bas-relief depicting Amun as pharaoh Identification with Min and Ra Atenist heresy Theology Decline

Yahweh By early post-biblical times, the name of Yahweh had ceased to be pronounced. In modern Judaism, it is replaced with the word Adonai, meaning Lord, and is understood to be God's proper name and to denote his mercy. Many Christian Bibles follow the Jewish custom and replace it with "the LORD". Name[edit] The Tetragrammaton in Paleo-Hebrew (10th century BCE to 135 CE), old Aramaic (10th century BCE to 4th century CE) and square Hebrew (3rd century BCE to present) scripts. NOTE: Hebrew is written from right to left. History[edit] Origins and adoption as the God of Israel[edit] A YHD drachm, a silver coin probably struck by the Persian administration in Jerusalem (4th century BCE). The earliest putative reference to Yahweh in the historical record occurs in a list of Bedouin tribes of the Transjordan made by Amenhotep III (c. 1391- BCE - 1353 BCE) in the temple of Amon at Soleb. Yw in the Baal Cycle[edit] From KTU II:IV:13-14 tgr.il.bnh.tr [ ] wyn.lt[p]n il dp[id...][31] [J yp 'r] Sm bny yw 'ilt

Indra Origins[edit] Aspects of Indra as a deity are cognate to other Indo-European gods; they are either thunder gods such as Thor, Perun, and Zeus, or gods of intoxicating drinks such as Dionysus. The name of Indra (Indara) is also mentioned among the gods of the Mitanni, a Hurrian-speaking people who ruled northern Syria from ca.1500BC-1300BC.[5] Vedic Indra corresponds to Verethragna of the Zoroastrian Avesta as the noun verethragna- corresponds to Vedic vrtrahan-, which is predominantly an epithet of Indra. In the Rigveda[edit] The Rigveda states, He under whose supreme control are horses, all chariots, the villages, and cattle; He who gave being to the Sun and Morning, who leads the waters, He, O men, is Indra. (2.12.7, trans. It further states, Indra, you lifted up the pariah who was oppressed, you glorified the blind and the lame. The Rig-Veda frequently refers to him as Śakra: the mighty-one. Status and function[edit] Characteristics[edit] Appearance[edit] Other characteristics[edit]

Aether (mythology) In Greek mythology, Aether or Aither (Æthere, Ancient Greek: Αἰθήρ, pronounced [aitʰɛ̌ːr]), also known as Akmon or Acmon in Latin (possibly from the same route as "Acme") is one of the primordial deities, the first-born elementals. Aether is the personification of the upper air.[1] He embodies the pure upper air that the gods breathe, as opposed to the normal air (ἀήρ, aer) breathed by mortals. Like Tartarus and Erebus, Aether may have had shrines in ancient Greece, but he had no temples and it is unlikely that he had a cult. Hyginus ... started his Fabulae with a strange hodgepodge of Greek and Roman cosmogonies and early genealogies. It begins as follows: Ex Caligine Chaos. Ex Chao et Caligine Nox Dies Erebus Aether (Praefatio 1). The fifth Orphic hymn to Aether describes the substance as "the high-reigning, ever indestructible power of Zeus," "the best element," and "the life-spark of all creatures The Theoi Project, "AITHER"

Selene Names[edit] The etymology of Selene is uncertain, but if the name is of Greek origin, it is likely connected to the word selas (σέλας), meaning "light".[3] Origin[edit] Lovers and offspring[edit] Endymion[edit] "And the Titanian goddess, the moon, rising from a far land, beheld her [Medea] as she fled distraught, and fiercely exulted over her, and thus spake to her own heart: 'Not I alone then stray to the Latmian cave, nor do I alone burn with love for fair Endymion; oft times with thoughts of love have I been driven away by thy crafty spells, in order that in the darkness of night thou mightest work thy sorcery at ease, even the deeds dear to thee. Others[edit] Quintus Smyrnaeus makes Helios and Selene (the Sun and Moon) the parents of the Horae, goddesses of the seasons.[31] Smyrnaeus describes them as the four handmaidens of Hera, but in most accounts their number is three, and their parents are Zeus and Themis. The moon chariot[edit] Depictions[edit] Cult[edit] Notes[edit]

Phoebe (mythology) According to a speech that Aeschylus, in Eumenides, puts in the mouth of the Delphic priestess herself, she received control of the Oracle at Delphi from Themis: "Phoebe in this succession seems to be his private invention," D.S. Robertson noted, reasoning that in the three great allotments of oracular powers at Delphi, corresponding to the three generations of the gods, "Ouranos, as was fitting, gave the oracle to his wife Gaia and Kronos appropriately allotted it to his sister Themis."[4] In Zeus' turn to make the gift, Aeschylus could not report that the oracle was given directly to Apollo, who had not yet been born, Robertson notes, and thus Phoebe was interposed. Theoi.com: Phoebe

Iris (mythology) In Greek mythology, Iris (/ˈɨrɨs/; Ἶρις) is the personification of the rainbow and messenger of the gods. She is also known as one of the goddesses of the sea and the sky. Iris links the gods to humanity. According to Hesiod's Theogony, Iris is the daughter of Thaumas and the cloud nymph Electra. Iris is frequently mentioned as a divine messenger in the Iliad which is attributed to Homer, but does not appear in his Odyssey, where Hermes fills that role. According to Apollonius Rhodius, Iris turned back the Argonauts Zetes and Calais who had pursued the Harpies to the Strophades ('Islands of Turning'). Iris had numerous poetic titles and epithets, including Chrysopteron (Golden Winged), Podas ôkea (swift footed) or Podênemos ôkea (wind-swift footed), Roscida (dewey), and Thaumantias or Thaumantos (Daughter of Thaumas, Wondrous One). Iris is represented either as a rainbow, or as a young maiden with wings on her shoulders.

anthropomorphic bearded being could also be depicted as a ram, a bull or a crocodile . 'father' of snakes 'father' of the primeval snake Nehebkau .personified fertile earth and barren desert . Ruled North-Eastern area ? by mirlen101 Feb 27