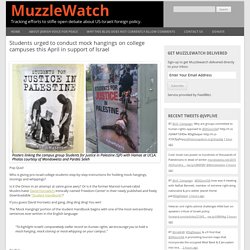 Who is giving pro-Israel college students step-by-step instructions for holding mock hangings, stonings and whippings? Is it the Onion in an attempt at satire gone awry? Or is it the former Marxist-turned-rabid Muslim-hater David Horowitz’s ironically named ‘Freedom Center’ in their newly published and freely downloadable “Student Handbook”? If you guess David Horowitz and gang, ding ding ding! You win! The ‘Mock Hangings’ portion of the student Handbook begins with one of the most extraordinary sentences ever written in the English language: No Women Allowed in the Bomb Shelter. November 21, 2012, 1:21pm By Debra Nussbaum Cohen ורד אלמוגי Amid all the Facebook posts about the heart-rending violence taking place at this moment in Israel and Gaza, this photo of a bomb shelter door in Ashdod leapt out. 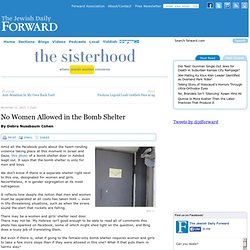 It says that the bomb shelter is only for men and boys. We don’t know if there is a separate shelter right next to this one, designated for women and girls. It reflects how deeply the notion that men and women must be separated at all costs has taken hold — even in life-threatening situations, such as when the sirens sound the alert that rockets are falling. There may be a women and girls’ shelter next door. A special form for Arab passengers to warn airport ahead of their arrival. Israel responded to the “flytilla” with a wildly disproportionate deployment of police and extraordinary security checks. 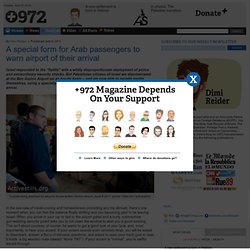 But Palestinian citizens of Israel are discriminated at the Ben Gurion Airport on an hourly basis – and are now able to racially profile themselves, using a specially provided form to warn the airport authorities of their arrival. Tourists being watched by security forces at Ben Gurion airport, June 8 2011 (photo: Oren Ziv / activestills) Gay opposition rises against Israel Apartheid Week. As the Israel Apartheid Week (IAW) events of March come to a close, a number of leading gay and non-gay activists have come out swinging to defend the Jewish state. 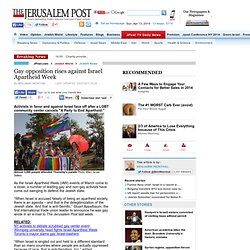 “When Israel is accused falsely of being an apartheid society, there is an agenda – and that is the delegitimization of the Jewish state. And that is anti-Semitic,” Stuart Appelbaum, the first international trade union leader to announce he was gay, wrote in an e-mail to The Jerusalem Post last week. MKs discuss France-like burka ban. Israeli lawmakers and women’s rights activists weighed in Thursday over a bill which passed one house of the French parliament on Tuesday banning face-covering Islamic veils in France. 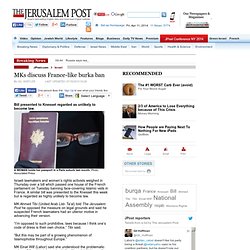 A similar bill was presented to the Knesset this week but is regarded as highly unlikely to become law. MK Ahmed Tibi (United Arab List- Ta’al) told The Jerusalem Post he opposed the measure on legal grounds and said he suspected French lawmakers had an ulterior motive in advancing their version. “I’m opposed to such prohibitive, laws because I think one’s code of dress is their own choice,” Tibi said. “But this may be part of a growing phenomenon of Islamophobia throughout Europe.” MK Einat Wilf (Labor) said she understood the problematic nature of the state intervening in its citizens’ right to practice their religious beliefs but that ultimately she supported it to protect the rights of women. “The state should not accept instances where women and men are separated humiliatingly,” she said. 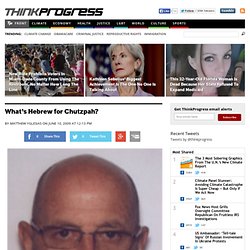 " It seems that Yossi Peled, a retired general-turned-politician currently serving as Minister Without Portfolio in the Netanyahu cabinet, wants to sanction the United States in order to force Barack Obama to back down from his commitment to a settlement freeze. His specific proposals include “selling sensitive equipment that the Washington opposes distributing internationally, and allowing other countries that compete with the US to get involved with the peace process and be given a foothold for their military forces and intelligence agencies” moves that would be certain to backfire by depriving Israel of its valuable political capital inside the United States.

Israel&#039;s parliament rejects loyalty oath. An Israeli parliamentary committee scrapped Sunday a controversial bill that would have required Israelis to take a loyalty oath to the Jewish state in order to get citizenship and softened a law on commemorating the Naqba. The bill, proposed by Foreign Minister Avigdor Lieberman's ultra-nationalist party was voted down eight to three. It needed the parliamentary committee's approval in order to go before the full Knesset, where it would require three votes to become law. The proposed pledge required Arab Israelis, most of whom are Muslim or Christian, and Jewish Israelis to pledge allegiance to Israel as a Jewish state.

"I pledge loyalty to the state of Israel as a Jewish, Zionist and democratic state, to its symbols and values, to serve the state as much as I am required in military service or alternative service, as decided by law," read the proposed oath. Arab Israelis warn of civil disobedience Haneen Zoabi, MK NDP Naqba bill softened. Court: No crime to shout &#039;Heil Sharon&#039; while giving Na.