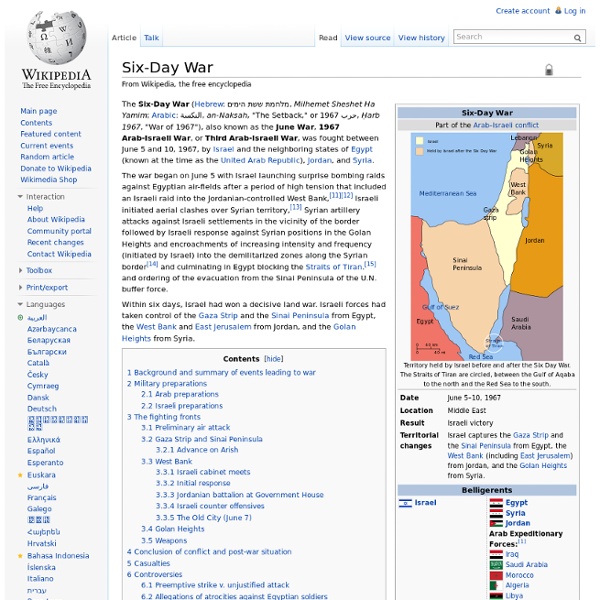 The Six-Day War (Hebrew: מלחמת ששת הימים, Milhemet Sheshet Ha Yamim; Arabic: النكسة, an-Naksah, "The Setback" or حرب ۱۹٦۷, Ḥarb 1967, "War of 1967"), also known as the June War, 1967 Arab–Israeli War, or Third Arab–Israeli War, was fought between June 5 and 10, 1967, by Israel and the neighboring states of Egypt (known at the time as the United Arab Republic), Jordan, and Syria. The war began on June 5 with Israel launching surprise strikes against Egyptian air-fields in response to the mobilisation of Egyptian forces on the Israeli border. A period of high tension had preceded the war. Background and summary of events leading to war After the 1956 Suez Crisis, there were numerous minor border clashes between Israel and its Arab neighbors, particularly Syria. Events: Israel–Jordan Events: Israel–Syria During 1965–7, Israel's armed forces staged numerous provocations along the Israeli–Syrian border area.[47] The pattern was of action and reaction. Events: Israel–Egypt Military preparations Related:  Palestine/Israel

What Led To The Six Day War? What led to the Six Day War in 1967? Terrorist Attacks on Israel Looking at the events that led up to the war, the main cause comes out to be increasing tensions between Israel and its neighboring Arab countries during the mid 1960s. Israel adopted a policy of diverting water from the Jordan River to the Negev Desert and this was became the cause of the tension. Naturally, this angered Arabs so much that they threatened to divert this flow into Lake Galilee. Syria was bombed by Israel in 1965 and 1966 soon after they began implementing their policy of diverting water from Israel. After the formation of the PLO and Fatah movements against Israel, the already intense relations between Israel and its neighbors took on a new extremity. Many historians also lay down that Israel wanted a war in the face of all the economic problems faced at that time, taking on the strategy that a war would distract people’s minds from these economic fiascos and will also bring in foreign aid.

Yom Kippur War The Yom Kippur War, Ramadan War, or October War (Hebrew: מלחמת יום הכיפורים‎ Milẖemet Yom HaKipurim or מלחמת יום כיפור Milẖemet Yom Kipur; Arabic: حرب أكتوبر‎ ḥarb ʾUktōbar, or حرب تشرين ḥarb Tišrīn), also known as the 1973 Arab–Israeli War, was a war fought by the coalition of Arab states led by Egypt and Syria against Israel from October 6 to 25, 1973. The war began when the Arab coalition launched a joint surprise attack on Israeli positions in the Israeli-occupied territories on Yom Kippur, the holiest day in Judaism, which occurred that year during the Muslim holy month of Ramadan. Egyptian and Syrian forces crossed ceasefire lines to enter the Sinai Peninsula and Golan Heights respectively, which had been captured by Israel in the 1967 Six-Day War. On October 22 a United Nations-brokered ceasefire quickly unraveled, with each side blaming the other for the breach. The war had far-reaching implications. Background According to Chaim Herzog: Events leading up to the war

Suez Crisis The Suez Crisis, also referred to as the Tripartite Aggression, Suez Canal Crisis, Suez War, or Second Arab-Israeli War[13][14] (Arabic: أزمة السويس /‎ العدوان الثلاثي‎ Azmat al-Suways / al-ʻUdwān al-Thulāthī , "Suez Crisis"/ "the Tripartite Aggression"; French: Crise du canal de Suez; Hebrew: מבצע קדש‎ Mivtza' Kadesh "Operation Kadesh," or מלחמת סיני Milẖemet Sinai, "Sinai War"), was a diplomatic and military confrontation in late 1956 between Egypt on one side, and Britain, France and Israel on the other, with the United States, the Soviet Union, and the United Nations playing major roles in forcing Britain, France and Israel to withdraw.[15] Less than a day after Israel invaded Egypt, Britain and France issued a joint ultimatum to Egypt and Israel, and then began to bomb Cairo. Background The canal instantly became strategically important; it provided the shortest ocean link between the Mediterranean and the Indian Ocean. Events leading to the Suez Crisis Post-war years

Palestine Satellite image of the region of Palestine, 2003. Palestine (Arabic: فلسطين‎ Filasṭīn, Falasṭīn, Filisṭīn; Greek: Παλαιστίνη, Palaistinē; Latin: Palaestina; Hebrew: פלשתינה Palestina) is a geographic region in Western Asia between the Mediterranean Sea and the Jordan River. It is sometimes considered to include adjoining territories. The name was used by Ancient Greek writers, and was later used for the Roman province Syria Palaestina, the Byzantine Palaestina Prima and the Umayyad and Abbasid province of Jund Filastin. The region is also known as the Land of Israel (Hebrew: ארץ־ישראל Eretz-Yisra'el),[1] the Holy Land, the Southern Levant,[2] Cisjordan, and historically has been known by other names including Canaan, Southern Syria and Jerusalem. Situated at a strategic location between Egypt, Syria and Arabia, and the birthplace of Judaism and Christianity, the region has a long and tumultuous history as a crossroads for religion, culture, commerce, and politics. Etymology History

Six Day War - 6 Day war - Definition, History Israel: An honored dictum of the ancient Chinese work, The Art of War, by Sun Tzu, states, "When you are strong, act weak." Israeli hesitancy and American vacillation inadvertently created a military and diplomatic strategic opportunity. In the face of the seeming Israeli and American collapse, Nasser and his allies were drawn into the attack in much the same way as the Romans were drawn into the Carthaginian center at the battle of Cannae. While the victory seems to some to have been assured in retrospect, there was certainly no way of anticipating it. Israelis were certainly unwilling to go to war, and had a disproportionate fear of the possible consequences. the fear of surprise attackthe economic impossibility of prolonged mobilizationthe certain knowledge that without a military response, any solution would be a "compromise" that would gravely Israel's standing and encourage further aggression. Israel was unprepared for the swift victory and for its extent. Ami Isseroff Notes 1. 2.

2006 Lebanon War Smoke over Haifa, Israel, after a rocket launched by Hezbollah hit the city near Bnei-Zion hospital The conflict was precipitated by Zar'it-Shtula incident, On 12 July 2006, militants from the group Hezbollah fired rockets at Israeli border towns as a diversion for an anti-tank missile attack on two armored Humvees patrolling the Israeli side of the border fence.[36] The ambush left three soldiers dead. Two soldiers were kidnapped and taken by Hezbollah to Lebanon.[36][37] Five more were killed in Lebanon, in a failed rescue attempt. The conflict is believed to have killed at least 1,191–1,300 Lebanese people,[42][43][44][45] and 165 Israelis.[46] It severely damaged Lebanese civil infrastructure, and displaced approximately one million Lebanese[47] and 300,000–500,000 Israelis.[15][48][49] On 11 August 2006, the United Nations Security Council unanimously approved UN Resolution 1701 in an effort to end the hostilities. Background[edit] Beginning of conflict[edit] Israeli response[edit]

1948 Arab–Israeli War The 1948 Palestine war, known in Arabic as al-Nakba (النكبة, "The Catastrophe") and in Hebrew as the Milkhemet Ha'atzma'ut (מלחמת העצמאות, "War of Independence") or Milkhemet Hashikhrur (מלחמת השחרור "War of Liberation"), refers to the war that occurred in the former Mandatory Palestine during the period between the United Nations vote on the partition plan on November 30, 1947,[8] and the official end of the first Arab-Israeli war on July 20, 1949.[9] Historians divide the war into two phases:[10][11] The 1947–48 Civil War in Mandatory Palestine (sometimes called an "intercommunal war")[12] in which the Jewish and Arab communities of Palestine, supported by the Arab Liberation Army, clashed, while the region was still fully under British rule.The 1948 Arab–Israeli War after 15 May 1948, marking the end of the British Mandate and the birth of Israel, in which Transjordan, Egypt, Syria and Iraq intervened and sent expeditionary forces that fought the Israeli army. Background[edit]

if bats knew ON THIS DAY | 10 | 1967 Surviving the six-day war 1967: Surviving the six-day war Josephine Bacon was living in Jerusalem with her husband and two-year-old daughter when the 1967 war, also known as six-day war broke out. In the weeks preceding the war, she made what preparations she could to ready the family home for the conflict. We filled every available receptacle with water, because June is quite a hot month and Jerusalem is very dry. If we'd had our water supply cut off we would have been in difficulty, especially as I had a small child. We did the usual things that one does in war - you stick tape over the windows so a blast won't shatter them and cause damage inside. There were hardly any air raid shelters at the time. For the first couple of days there was shelling from the United Nations building [captured by the Jordanians on the first day of the war] which landed around our house. We sheltered in the corridor, which had no windows, and put up the dining room table vertically to hopefully stave off any blast. Direct hit Reunions

Gaza War The Gaza War, also known as Operation Cast Lead (מבצע עופרת יצוקה‎) and Gaza Massacre (مجزرة غزة‎)[38][39][40] or the Battle of al-Furqan [the criterion] (معركة الفرقان‎)[41][42] was a three-week armed conflict in the Gaza Strip between Israel and Palestinian militants that began on 27 December 2008 and ended on 18 January 2009 in a unilateral ceasefire.[43] Israel's stated goal was to stop rocket fire into Israel[44] and weapons smuggling into the Gaza strip.[45][46] After the beginning of the conflict, Palestinian groups continued firing rockets in response to what they characterized as "massacres".[47] Israeli forces attacked police stations, military targets including weapons caches and suspected rocket firing teams,[48] as well as political and administrative institutions in the opening assault, striking in the densely populated cities of Gaza, Khan Yunis and Rafah.[49] An Israeli ground invasion began on January 3. Background[edit] 2008 six-month lull[edit] Implementation[edit]

War of Attrition The War of Attrition (Arabic: حرب الاستنزاف‎ Ḥarb al-Istinzāf, Hebrew: מלחמת ההתשה‎ Milhemet haHatashah) involved fighting between Israel and Egypt from 1967 to 1970. Following the 1967 Six-Day War, no serious diplomatic efforts tried to resolve the issues at the heart of the Arab-Israeli conflict. In September 1967, Arab states formulated the "Three No's" policy, barring peace, recognition or negotiations with Israel. Egyptian President Gamal Abdel Nasser believed that only military initiative would compel Israel or the international community to facilitate a full Israeli withdrawal from Sinai,[17][18] and hostilities soon resumed along the Suez Canal. These initially took the form of limited artillery duels and small-scale incursions into Sinai, but by 1969 the Egyptian Army judged itself prepared for larger-scale operations. Egyptian front[edit] The international community and both countries attempted to find a diplomatic solution to the conflict. Timeline[edit] 1967[edit] 1968[edit]