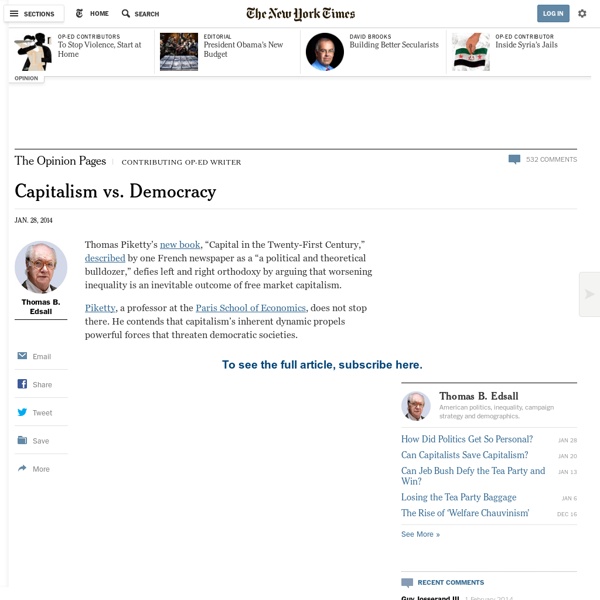 Thomas Piketty’s new book, “Capital in the Twenty-First Century,” described by one French newspaper as a “a political and theoretical bulldozer,” defies left and right orthodoxy by arguing that worsening inequality is an inevitable outcome of free market capitalism. Piketty, a professor at the Paris School of Economics, does not stop there. He contends that capitalism’s inherent dynamic propels powerful forces that threaten democratic societies. Capitalism, according to Piketty, confronts both modern and modernizing countries with a dilemma: entrepreneurs become increasingly dominant over those who own only their own labor. In Piketty’s view, while emerging economies can defeat this logic in the near term, in the long run, “when pay setters set their own pay, there’s no limit,” unless “confiscatory tax rates” are imposed. Photo “I am hesitant to call Thomas Piketty’s new book Capital in the 21st Century one of the best books in economics written in the past several decades.

Related:  Red-Hot • Thomas Piketty • Nature of the Conflict • the system

How Tesla Will Change The World This is Part 2 of a four-part series on Elon Musk’s companies. For an explanation of why this series is happening and how Musk is involved, start with Part 1. A Wait But Why post can be a few different things. The Davos oligarchs are right to fear the world they’ve made The billionaires and corporate oligarchs meeting in Davos this week are getting worried about inequality. It might be hard to stomach that the overlords of a system that has delivered the widest global economic gulf in human history should be handwringing about the consequences of their own actions. But even the architects of the crisis-ridden international economic order are starting to see the dangers. Paul Craig Roberts – The Matrix Is Real & How It Will Change All Of Our Lives: Trends Journal Exclusive As the West stares into the great abyss and the world prepares for even greater economic turmoil, today Dr. Paul Craig Roberts gives readers a terrifying look at the real Matrix and how it will change all of our lives. King World News was given exclusive permission from the Trends Journal to release this amazing piece. It also contains an ominous warning from the former U.S. Treasury official, as the world prepares to descend into total chaos. By Dr.

The end of capitalism has begun The red flags and marching songs of Syriza during the Greek crisis, plus the expectation that the banks would be nationalised, revived briefly a 20th-century dream: the forced destruction of the market from above. For much of the 20th century this was how the left conceived the first stage of an economy beyond capitalism. The force would be applied by the working class, either at the ballot box or on the barricades. The lever would be the state. Piketty's Inequality Story in Six Charts In this week’s magazine, I’ve got a lengthy piece about “Capital in the Twenty-first Century,” a new book about rising inequality by Thomas Piketty, a French economist, that is sparking a lot of comment and debate. (Brad DeLong has a useful summary of some early reviews.) I’ll go further into that discussion in future posts, but first I thought it might be useful to portray the gist of Piketty’s story in a series of charts.

Oligarchy, American Style Anyone who has tracked this issue over time knows what I mean. Whenever growing income disparities threaten to come into focus, a reliable set of defenders tries to bring back the blur. Think tanks put out reports claiming that inequality isn’t really rising, or that it doesn’t matter. Pundits try to put a more benign face on the phenomenon, claiming that it’s not really the wealthy few versus the rest, it’s the educated versus the less educated. Mises Institute Left-wing revolution is one of history's biggest bait-and-switches. Both for the intellectuals who hanker for the grapeshot, and for the marginalized peoples who get concentration camps instead of the anti-capitalist utopia they were promised. "Revolutions eat their children." This observation, by a journalist during the French Revolution, was only partly true.

Kapital for the Twenty-First Century? Kapital for the Twenty-First Century? Thomas Piketty, 2011 (Parti Socialiste du Loiret/Flickr) Capital in the Twenty-First Century by Thomas Piketty, trans. It's the Planet Stupid!: Capitalism and The Destruction of the Commons There is a war going on right now between those who are working to protect the commons and the hard-core capitalists, who are working to privatize our economy, culture, ecology, environment and government. The stakes are high. The outcome will determine whether we live in a dystopian chaos, or a civil society; whether we preserve our natural life support system, or live on life support. At the moment, it’s a rout. The capitalists are winning, and those very few who speak for the commons are ignored, marginalized or ridiculed. To understand this conflict, we need to understand what is meant by the commons.

“Manufacturing Dissent”: The Anti-globalization Movement is Funded by the Corporate Elites This article was first published in 2010. The author’s introductory quote was first formulated in 2001 in the context of the Summit of the Americas in Quebec City which was held a few months before 9/11 “Everything the [Ford] Foundation did could be regarded as “making the World safe for capitalism”, reducing social tensions by helping to comfort the afflicted, provide safety valves for the angry, and improve the functioning of government (McGeorge Bundy, National Security Advisor to Presidents John F. Kennedy and Lyndon Johnson (1961-1966), President of the Ford Foundation, (1966-1979)) “Under the New World Order, the ritual of inviting “civil society” leaders into the inner circles of power –while simultaneously repressing the rank and file– serves several important functions. First, it says to the World that the critics of globalization “must make concessions” to earn the right to mingle.