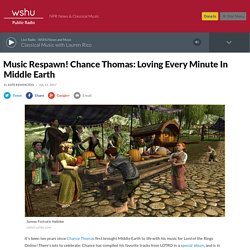 There's lots to celebrate: Chance has compiled his favorite tracks from LOTRO in a special album, and is in the process of creating music for the just-announced expansion, which takes us to Mordor. In our conversation, he explains that Tolkien's trilogy is still the primary source of his inspiration. Video Game Scoring Online Masterclass with Chance Thomas. Interview with Composer, Chance Thomas.

Chance Thomas is this year’s keynote Speaker at GameSoundCon. 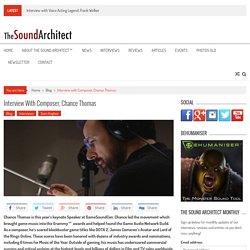 Chance led the movement which brought game music into the Grammy™ awards and helped found the Game Audio Network Guild. As a composer, he’s scored blockbuster game titles like DOTA 2, James Cameron’s Avatar and Lord of the Rings Online. These scores have been honored with dozens of industry awards and nominations, including 6 times for Music of the Year. Outside of gaming, his music has underscored commercial success and critical acclaim at the highest levels and billions of dollars in film and TV sales worldwide.

Chance is also the author of a new university textbook Composing Music For Games: The Art, Technology and Business of Video Game Scoring, published by Focal Press (Oxford). Thanks for speaking with us Chance, it’s a pleasure having the opportunity to speak to you! You’re the man, Sam! Now before we talk about GameSoundCon, we’d love to chat about your origin story. Elton John. James Cameron’s Avatar. 1) Immersion. Interview With Chance Thomas, Game Composer. Interview With Chance Thomas, Game Composer By Aaron Marks Chance Thomas is a composer's composer. 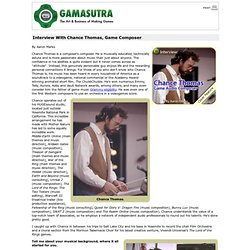 He is musically educated, technically astute and is more passionate about music than just about anyone. The confidence in his abilities is quite evident but it never comes across as "attitude". Music for film, CHANCE THOMAS Rohan Soundtrack. I'll never forget my first hearing of the Rohan refrain composed by Howard Shore for 2002's The Two Towers. 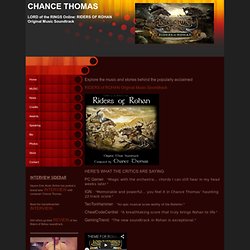 As the Hardanger melody rang out across the theater, I was completely mesmerized. This was the Rohan of my dreams, suddenly given voice in melody! It was stunningly, intuitively perfect. Of all the themes to be found running through Peter Jackson's trilogy, this one really resonated with me. Fast forward 10 years. How does one broadly define Rohan? And so it begins. All of these colors come from Northwestern Europe of centuries past, clueing us again that the theme is contemporary to the rise of Anglo-Saxon culture. Interview with Chance Thomas (December 2012) Few composers have as much experience in writing and recording orchestral game music as Chance Thomas. 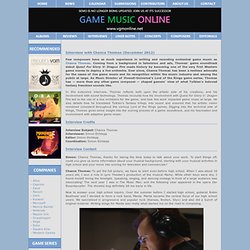 Coming from a background in television and ads, Thomas' game soundtrack debut Quest For Glory V: Dragon Fire made history by becoming one of the very first Western game scores to deploy a live orchestra. Jukebox Heroes: Chance Thomas talks about scoring Turbine's expansions. For many Lord of the Rings Online players, the name Chance Thomas is synonymous with the feel of virtual Middle-earth. 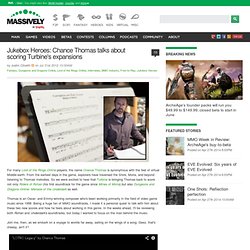 From the earliest days in the game, explorers have traversed the Shire, Moria, and beyond listening to Thomas' melodies. So we were excited to hear that Turbine is bringing Thomas back to score not only Riders of Rohan (his first soundtrack for the game since Mines of Moria) but also Dungeons and Dragons Online:Menace of the Underdark as well. Thomas is an Oscar- and Emmy-winning composer who's been working primarily in the field of video game music since 1998. Being a huge fan of MMO soundtracks, I made it a personal quest to talk with him about these two new scores and how he feels about working in this genre. In the weeks ahead, I'll be reviewing both Rohan and Underdark's soundtracks, but today I wanted to focus on the man behind the music. Join me, then, as we embark on a voyage to worlds far away, sailing on the wings of a song.

Chance Thomas. Chance Thomas is a composer and producer of original music for video games, animation, films and television. 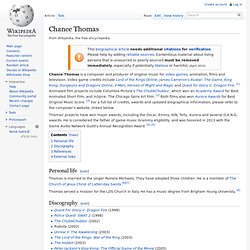 Interview with composer Chance Thomas. Hi Chance, thanks for taking the time to do this interview. 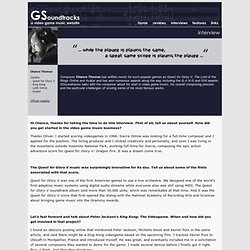 First of all, tell us about yourself. How did you get started in the video game music business? Thanks Oliver. I started scoring videogames in 1996. Sierra Online was looking for a full-time composer and I applied for the position. The Quest for Glory V music was surprisingly innovative for its day. Quest for Glory V was one of the first American games to use a live orchestra. Let’s fast forward and talk about Peter Jackson’s King Kong: The Videogame. I found an obscure posting online that mentioned Peter Jackson, Michelle Ancel and Xavier Poix in the same article, and said there might be a King Kong videogame based on the upcoming film.

How much creative freedom were you given by the developers in order to find a unique and creative soundscape for the game? Tons of freedom. Your King Kong score is very dynamic in-game.