Nature of the Conflict

There is a powerful group of closely networked oligarchs, which claims for themselves the free access to all resources in the world. Free access means for them, that the resources can be brought under their control at a favorable price.

Free access also means that they have free hand to shape the conditions for the exploitation of the resources in a way that profits are maximised. The excess of freedom for the few is only possible through conditions which force the many into servitude, giving away their entire vitality without fair consideration for their own well-being. Achievements of social security are being destroyed in order to establish a system of hidden slavery. What’s REALLY behind the war on home ownership? Kit Knightly The incipient “Great Reset” is a multi-faceted beast. 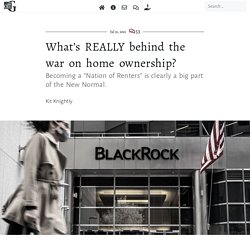 We talk a lot about vaccine passports and lockdowns and the Covid-realated aspects – and we should – but there’s more to it than that. Dr. Guido G. Preparata: They Want to Turn Us All into A Global Society of Termites. Mohsen Abdelmoumen: Your book "Conjuring Hitler" received a laudatory criticism of our friend Peter Dale Scott. 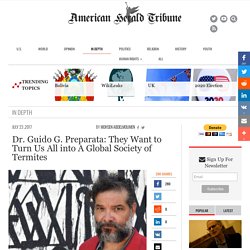 Moreover, I share the view of this great intellectual on the fact that this book is essential in the work of historical research. How did you arrive at conclusions against the flow of the historians of the establishment, namely that Hitler was made by the United States and Great Britain and that World War II was inevitable? Dr. Guido Preparata: I started out like most westerners, whose childhood was steeped in the typical propagandistic “currents” of the Cold War: by watching, endlessly and enthusiastically, epic pro-Allies and anti-German war movies. 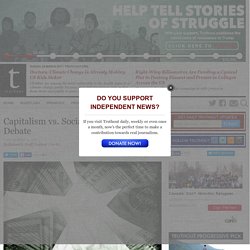 Two major global collapses -- first in the 1930s and more recently, since 2008 -- plus periodic downturns every few years have underscored the instability that haunts the system. At the same time, deepening inequality has turned ever-larger populations into capitalism's critics. Talk of reform and revolution has crowded onto political agendas. The capitalism versus socialism debate has returned everywhere. During the later nineteenth and twentieth centuries, we mostly believed ourselves to be caught up in a struggle between capitalism and socialism -- as the two alternative economic systems differentiated by how the individual related to the state. Reexamining past economic systems that coexisted with state apparatuses shows that they included both private and public enterprises. Capitalism has a parallel history. Chris Hedges (2013) "Neo - Feudalistic World"

Free21 NewsONpaper. It's the Planet Stupid!: Capitalism and The Destruction of the Commons. There is a war going on right now between those who are working to protect the commons and the hard-core capitalists, who are working to privatize our economy, culture, ecology, environment and government. 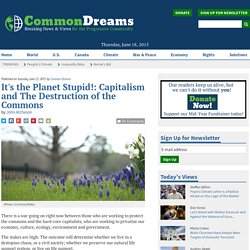 The stakes are high. The outcome will determine whether we live in a dystopian chaos, or a civil society; whether we preserve our natural life support system, or live on life support. At the moment, it’s a rout. The capitalists are winning, and those very few who speak for the commons are ignored, marginalized or ridiculed. To understand this conflict, we need to understand what is meant by the commons. The cultural and natural resources accessible to all members of a society, including natural materials such as air, water, and a habitable earth. I would propose a slightly broader definition, one in which “cultural resources” includes the laws, regulations and norms designed to assure an equitable, just, prosperous and sustainable world.

Growth, GDP, Wealth and Other Non-sequitors. The Davos oligarchs are right to fear the world they’ve made. The billionaires and corporate oligarchs meeting in Davos this week are getting worried about inequality. 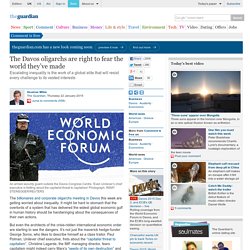 It might be hard to stomach that the overlords of a system that has delivered the widest global economic gulf in human history should be handwringing about the consequences of their own actions. But even the architects of the crisis-ridden international economic order are starting to see the dangers. Capitalism vs. Democracy. Thomas Piketty’s new book, “Capital in the Twenty-First Century,” described by one French newspaper as a “a political and theoretical bulldozer,” defies left and right orthodoxy by arguing that worsening inequality is an inevitable outcome of free market capitalism.

Piketty, a professor at the Paris School of Economics, does not stop there. He contends that capitalism’s inherent dynamic propels powerful forces that threaten democratic societies. Capitalism, according to Piketty, confronts both modern and modernizing countries with a dilemma: entrepreneurs become increasingly dominant over those who own only their own labor. In Piketty’s view, while emerging economies can defeat this logic in the near term, in the long run, “when pay setters set their own pay, there’s no limit,” unless “confiscatory tax rates” are imposed. Photo “I am hesitant to call Thomas Piketty’s new book Capital in the 21st Century one of the best books in economics written in the past several decades.

Oligarchy, American Style. Anyone who has tracked this issue over time knows what I mean. 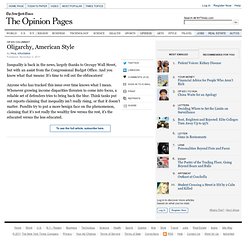 Whenever growing income disparities threaten to come into focus, a reliable set of defenders tries to bring back the blur. Think tanks put out reports claiming that inequality isn’t really rising, or that it doesn’t matter. Wealth Inequality in America. Kontext-tv.de.