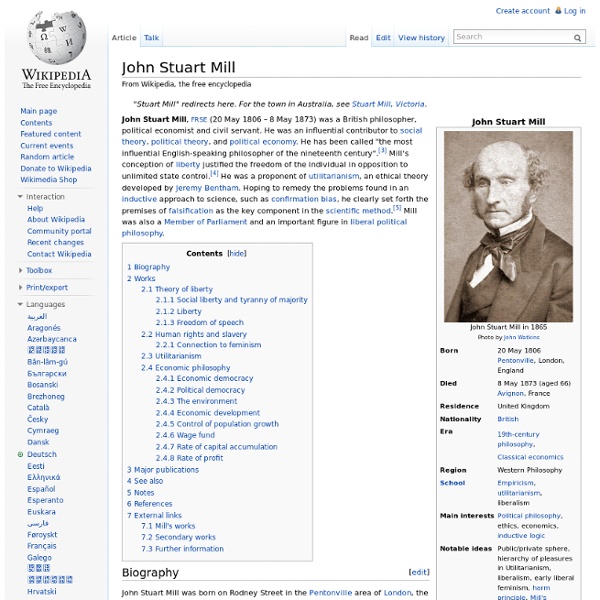 John Stuart Mill, FRSE (20 May 1806 – 8 May 1873) was an English philosopher, political economist and civil servant. He was an influential contributor to social theory, political theory and political economy. He has been called "the most influential English-speaking philosopher of the nineteenth century".[3] Mill's conception of liberty justified the freedom of the individual in opposition to unlimited state control.[4] He was a proponent of utilitarianism, an ethical theory developed by Jeremy Bentham. Hoping to remedy the problems found in an inductive approach to science, such as confirmation bias, he clearly set forth the premises of falsifiability as the key component in the scientific method.[5] Mill was also a Member of Parliament and an important figure in liberal political philosophy. Biography[edit] John Stuart Mill was born on Rodney Street in the Pentonville area of London, the eldest son of the Scottish philosopher, historian and economist James Mill, and Harriet Burrow.

Ragged Trousered Philosopher I met god the other day. I know what you're thinking. How the hell did you know it was god? Well, I'll explain as we go along, but basically he convinced me by having all, and I do mean ALL, the answers. Which is odd, because I'm still an atheist and we even agree on that! It all started on the 8.20 back from Paddington. What did he look like? Well not what you might have expected that's for sure. 'Anyone sitting here?' 'Help yourself' I replied. Sits down, relaxes, I ignore and back to the correspondence on genetically modified crops entering the food chain... Train pulls out and a few minutes later he speaks. 'Can I ask you a question?' Fighting to restrain my left eyebrow I replied 'Yes' in a tone which was intended to convey that I might not mind one question, and possibly a supplementary, but I really wasn't in the mood for a conversation. 'Why don't you believe in god?' The Bastard! I love this kind of conversation and can rabbit on for hours about the nonsense of theist beliefs. 'Stottle.