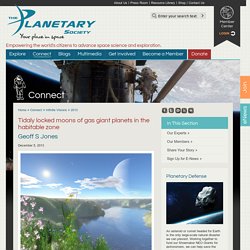 If the moon is what made Earth have life. Then a tidally locked moon of a gas giant may be the more common way a life supporting world happens. Gas giants could possibly have several life supporting moons.... Tidally locked, one face would always be turned to the planet, with the sun lighting half directly, the half facing the gas giant would get light at sunset or sunrise like angles; so the entire planet would get light, some parts much more than others. Planetary Defense An asteroid or comet headed for Earth is the only large-scale natural disaster we can prevent. Donate Beyond The Horizon, There's More To Explore!

Red Dwarf Stars Probably Not Friendly for Earth 2.0. Red dwarf stars — the stellar runts of the galaxy — probably aren’t so great for nurturing Earth-like worlds, say scientists running new simulations of the formation of planets around a variety of stars. 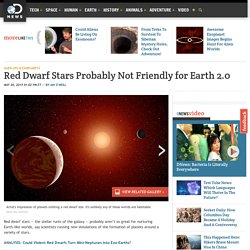 ANALYSIS: Could Violent Red Dwarfs Turn Mini-Neptunes into Exo-Earths? Astronomers have discovered a huge variety of alien worlds orbiting all types of stars, but one type of star, the M dwarf, has stuck out as one location where Earth-like exoplanets could be nurtured. Red dwarfs are plentiful in our galaxy and many nearby red dwarfs are known to play host to small and (likely) rocky exoplanets. Red dwarfs are long-lived and should there be a suitable rocky world orbiting within the star system’s habitable zone, surely there’s a good chance for life to evolve? Unfortunately, there’s some limitations with this thinking. ANALYSIS: Red Dwarfs Could Sterilize Alien Worlds of Life According to new research from Tokyo Institute of Technology and Tsinghua University, not so much. 'Water-Trapped' Worlds: Life Around a Cool Star. A new study takes a deeper look into the fate of life-permitting water on Earth-like planets around red dwarf stars, the most common stars in the universe. 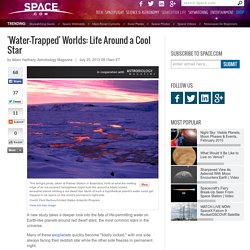 Many of these exoplanets quickly become "tidally locked," with one side always facing their reddish star while the other side freezes in permanent night. The new research suggests that terrestrial, red dwarf-orbiting exoplanets with significantly less water than Earth might end up with almost all of their water "trapped" on the planet's night side, possibly hurting chances of supporting life in the planet's temperate regions. [See Photos of the Strangest Alien Planets] On the other hand, this water-trapping phenomenon might boost an exoplanet's odds for life by keeping at bay a super-heating, runaway greenhouse effect that would otherwise eventually dry a planet out and doom extraterrestrial life.

Full atmosphere-ocean model of a rotationally locked exoplanet. The most common stars in our galaxy are dwarfs—smaller, reddish stars that emit far less light than our Sun. 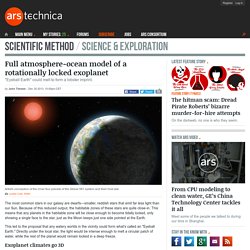 Strangely Shaped Oceans of Red-Dwarf Planets. The most common type of star in the universe is the red dwarf. 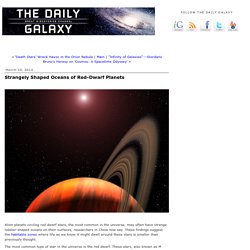 These stars, also known as M dwarfs, are small and faint, about one-fifth as massive as the sun and up to 50 times dimmer. They make up to 70 percent of the stars in the cosmos, a vast number that potentially makes them valuable places to look for extraterrestrial life. Indeed, recent findings from NASA's Kepler space observatory reveal that at least half of these stars host rocky planets that are one-half to four times the mass of Earth. Research into whether a distant planet might host life as we know it usually focuses on whether or not it has liquid water, since there is life virtually everywhere there is liquid water on Earth, even miles underground. Scientists typically concentrate on habitable zones, also known as Goldilock zones — the area around a star where it is neither too hot nor too cold enough for a planet to possess liquid water on its surface.

"The lobster shape is created by ocean currents," Hu said. Red dwarf stars might be best places to discover alien life. Red dwarfs are the most common type of star in the universe, and nearly every one of these stars may have a planet located in its habitable zone where life has the best chance of existing, a new study concludes. 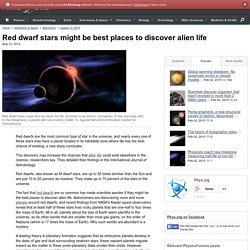 This discovery may increase the chances that alien life could exist elsewhere in the cosmos, researchers say. They detailed their findings in the International Journal of Astrobiology. Red dwarfs, also known as M dwarf stars, are up to 50 times dimmer than the Sun and are just 10 to 20 percent as massive. Exoplanets could avoid 'tidal locking' if they have atmospheres. Even a thin atmosphere can keep a planet spinning freely, giving it a day-and-night cycle like Earth's, say astronomers in Canada and France. 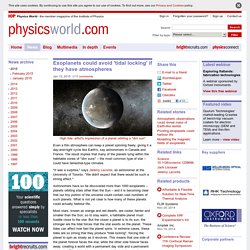 The result implies that many of the planets lying within the habitable zones of "dim suns" – the most common type of star – could have terrestrial-type climates. "It was a surprise," says Jérémy Leconte, an astronomer at the University of Toronto. "We didn't expect that there would be such a strong effect. " Thin atmosphere is enough to keep many exoplanets spinning. The majority of stars in our galaxy, and most likely the Universe as a whole, are small, (relatively) dim, low mass bodies. 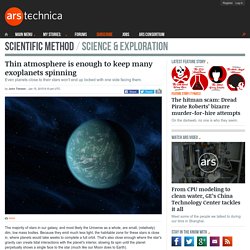 Because they emit much less light, the habitable zone for these stars is close in, where planets would take weeks to complete a full orbit. Red dwarf stars might be best places to discover alien life. Earth's Near-Twin Found Orbiting Red Dwarf.