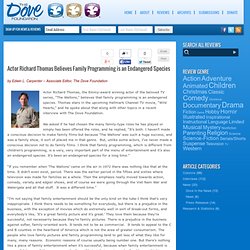 Carpenter – Associate Editor, The Dove Foundation Actor Richard Thomas, the Emmy-award winning actor of the beloved TV series, “The Waltons,” believes that family programming is an endangered species. Thomas stars in the upcoming Hallmark Channel TV movie, “Wild Hearts,” and he spoke about that along with other topics in a recent interview with The Dove Foundation.

We asked if he had chosen the many family-type roles he has played or simply has been offered the roles, and he replied, “It’s both. I haven’t made a conscious decision to make family films but because ‘The Waltons’ was such a huge success, and was a family show, it sort of placed me in that genre. “If you remember when ‘The Waltons’ came on the air in 1972 there was nothing like that at the time. “I’m not saying that family entertainment should be the only kind on the tube-I think that’s very inappropriate. “There are some scripts that come to you and you go, ‘Oh, this is a Richard Thomas part! Richard_Thomas. Claim To Fame: I bet 99 people out of 100 would know Richard for his portrayal of John-Boy in the 1970s TV series 'The Waltons.' Family Life: Georgiana Bischoff (November 1994 - present) 2 children Alma Gonzales (February 1975 - 1993) (divorced) 4 children He and Alma had one son and triplet daughters; and he and Georgiana have one son and one daughter. 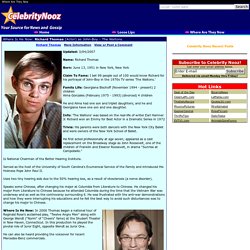 Info: 'The Waltons' was based on the real-life of writer Earl Hamner Jr. Richard won an Emmy for Best Actor in a Dramatic Series in 1972 Trivia: His parents were both dancers with the New York City Ballet and were owners of the New York School of Ballet. He first acted professionally at age seven; appeared as a cast replacement on the Broadway stage as John Roosevelt, one of the children of Franklin and Eleanor Roosevelt, in drama "Sunrise at Campobello. " Is National Chairman of the Better Hearing Institute. Served as the host of the University of South Carolina's Ecumenical Service of the Family and introduced His Holiness Pope John Paul II. The Two John-Boys - Earl Hamner and Richard Thomas.

As A young man growing up in Schuyler Virginia, Earl Hamner dreamed of becoming a writer. 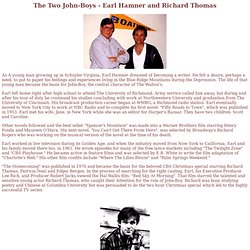 He felt a desire, perhaps a need, to put to paper his feelings and experiences living in the Blue Ridge Mountains during the Depression. The life of that young man became the basis for John-Boy, the central character of The Walton's. Earl left home right after high school to attend The University of Richmond. Army service called him away, but during and after his tour of duty he continued his studies concluding with work at Northwestern University and graduation from The University of Cincinnati. His broadcast production career began at WMBG, a Richmond radio station.

Other novels followed and the best seller "Spencer's Mountain" was made into a Warner Brothers film starring Henry Fonda and Maureen O'Hara. Richard Thomas, Actor: Gothamist: New York City News, Food, Arts & Events. Joan Marcus Though most people know him from his Emmy-winning role for Best Actor as John-Boy on The Waltons, Richard Thomas has a career that spans far beyond the classic television series. 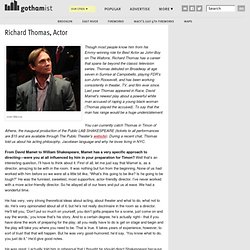 During his career, Thomas won an Emmy Award, and received nominations for another Emmy Award and two Golden Globe Awards. Thomas received his first major film roles, appearing in Winning (1969) with Paul Newman, about auto racing, and Last Summer (also 1969) with Barbara Hershey, a summer coming-of-age movie. In addition in 1971 he starred in the Universal Pictures/Hal Wallis Production "Red Sky At Morning". Red Sky At Morning was a film that Universal believed in strongly and the marketing department did all it could to get this, well made, film to gather steam at the theatrical boxoffice. Unfortunately it never clicked with the masses, was deemed a financial disappointment and is rarely seen on TV or even in theatrical revival houses. In 1997 and 1998, he appeared on Touched by an Angel.