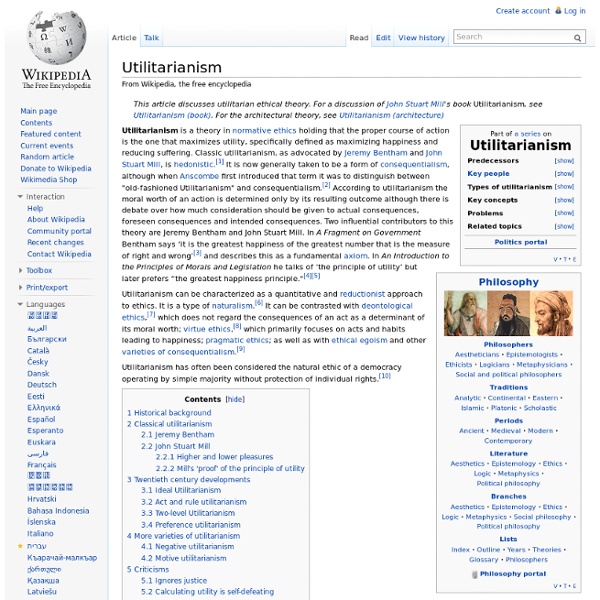 Utilitarianism is influential in political philosophy. Bentham and Mill believed that a utilitarian government was achievable through democracy. Mill thought that despotism was also justifiable through utilitarianism as a transitional phase towards more democratic forms of governance. As an advocate of liberalism, Mill stressed the relationship between utilitarianism and individualism.[10] Historical background[edit] The importance of happiness as an end for humans has long been recognized. Although utilitarianism is usually thought to start with Jeremy Bentham, there were earlier writers who presented theories that were strikingly similar. Hume says that all determinations of morality, this circumstance of public utility principally important. In the first three editions of the book, Hutcheson included various mathematical algorithms "...to compute the Morality of any Actions." This pursuit of happiness is given a theological basis:[22] …actions are to be estimated by their tendency. Related:  Ethics Theories • wikipedia • The problems with philosophy

Natural Law Theory legal definition of Natural Law Theory The unwritten body of universal moral principles that underlie the ethical and legal norms by which human conduct is sometimes evaluated and governed. Natural law is often contrasted with positive law, which consists of the written rules and regulations enacted by government. The term natural law is derived from the Roman term jus naturale. Naturalists believe that natural law principles are an inherent part of nature and exist regardless of whether government recognizes or enforces them. Divine natural law represents the system of principles believed to have been revealed or inspired by God or some other supreme and supernatural being. Divine Natural Law Proponents of divine natural law contend that law must be made to conform to the commands they believe were laid down or inspired by God, or some other deity, who governs according to principles of compassion, truth, and justice. The influence of divine natural law pervaded the colonial period of U.S. law. The U.S. Secular Natural Law

Susan Neiman American academic Susan Neiman (; born March 27, 1955) is an American moral philosopher, cultural commentator, and essayist. She has written extensively on the juncture between Enlightenment moral philosophy, metaphysics, and politics, both for scholarly audiences and the general public. She currently lives in Germany, where she is the Director of the Einstein Forum in Potsdam. Biography and career[edit] Born and raised in Atlanta, Georgia, Neiman dropped out of high school to join the anti-Vietnam War movement. Major works[edit] Evil in Modern Thought The book explores the period from the early Enlightenment to the late 20th century through discussions of philosophers who often figure in traditional histories of philosophy, such as Leibniz, Kant, Hegel, Nietzsche, and Schopenhauer, as well ones who do not, such as Pierre Bayle, Sigmund Freud, Albert Camus, Emmanuel Levinas, and Hannah Arendt. Moral Clarity Why Grow Up? Learning from the Germans Awards and honors[edit] Books[edit]

Pragmatism Pragmatism is a philosophical tradition that began in the United States around 1870.[1] Pragmatism is a rejection of the idea that the function of thought is to describe, represent, or mirror reality[citation needed]. Instead, pragmatists consider thought to be a product of the interaction between organism and environment. Thus, the function of thought is as an instrument or tool for prediction, action, and problem solving. A few of the various but interrelated positions often characteristic of philosophers working from a pragmatist approach include: Charles Sanders Peirce (and his pragmatic maxim) deserves much of the credit for pragmatism,[2] along with later twentieth century contributors, William James and John Dewey.[3] Pragmatism enjoyed renewed attention after W. Origins[edit] Charles Peirce (/ˈpɜrs/ like "purse"): the American polymath who first identified pragmatism Pragmatism as a philosophical movement began in the United States in the 1870s. Summary[edit] In 1868,[15] C.S.

Utility Economic definitions[edit] In economics, utility is a representation of preferences over some set of goods and services. Preferences have a (continuous) utility representation so long as they are transitive, complete, and continuous. Utility is usually applied by economists in such constructs as the indifference curve, which plot the combination of commodities that an individual or a society would accept to maintain a given level of satisfaction. In finance, utility is applied to generate an individual's price for an asset called the indifference price. Quantifying utility[edit] It was recognized that utility could not be measured or observed directly, so instead economists devised a way to infer underlying relative utilities from observed choice. Utility is taken to be correlative to Desire or Want. Cardinal and ordinal utility[edit] Economists distinguish between cardinal utility and ordinal utility. Utility functions of both sorts assign a ranking to members of a choice set. implies .

The Natural Law Tradition in Ethics (Stanford Encyclopedia of Philosophy) 1. Key Features of Natural Law Theories Even though we have already confined ‘natural law theory’ to its use as a term that marks off a certain class of ethical theories, we still have a confusing variety of meanings to contend with. Some writers use the term with such a broad meaning that any moral theory that is a version of moral realism — that is, any moral theory that holds that some positive moral claims are literally true (for this conception of moral realism, see Sayre-McCord 1988)— counts as a natural law view. For Aquinas, there are two key features of the natural law, features the acknowledgment of which structures his discussion of the natural law at Question 94 of the Prima Secundae of the Summa Theologiae. 1.1 Natural law and divine providence 1.2 Natural law and practical rationality The precepts of the natural law are binding by nature: no beings could share our human nature yet fail to be bound by the precepts of the natural law. 1.3 The substance of the natural law view

A Theory of Justice 1971 book by John Rawls A Theory of Justice is a 1971 work of political philosophy and ethics by the philosopher John Rawls, in which the author attempts to provide a moral theory alternative to utilitarianism and that addresses the problem of distributive justice (the socially just distribution of goods in a society). The theory uses an updated form of Kantian philosophy and a variant form of conventional social contract theory. Rawls's theory of justice is fully a political theory of justice as opposed to other forms of justice discussed in other disciplines and contexts. The resultant theory was challenged and refined several times in the decades following its original publication in 1971. First published in 1971, A Theory of Justice was revised in 1975, while translated editions were being released in the 1990s it was further revised in 1999. Objective[edit] The "original position"[edit] The agreement that stems from the original position is both hypothetical and ahistorical. 1.

Empiricism John Locke, a leading philosopher of British empiricism Empiricism is a theory which states that knowledge comes only or primarily from sensory experience.[1] One of several views of epistemology, the study of human knowledge, along with rationalism and skepticism, empiricism emphasizes the role of experience and evidence, especially sensory experience, in the formation of ideas, over the notion of innate ideas or traditions;[2] empiricists may argue however that traditions (or customs) arise due to relations of previous sense experiences.[3] Empiricism, often used by natural scientists, says that "knowledge is based on experience" and that "knowledge is tentative and probabilistic, subject to continued revision and falsification."[4] One of the epistemological tenets is that sensory experience creates knowledge. Etymology[edit] History[edit] Background[edit] A central concept in science and the scientific method is that it must be empirically based on the evidence of the senses.

Training4cyclists.com – Achieve Better Results with Less Training KWL Print – KWL Print & Digital Publications The thirteenth book in the series Catholic Studies for Senior Secondary Students spans the last two years of secondary education or high school, pre-university levels in Australia and many other countries. Most of the content is also appropriate for adult education. Every chapter is cross-referenced with the Compendium of the Catechism of the Catholic Church, which is meant to be used with this text. Themes selected by a working committee were prepared by invited writers, with the needs of students aged between 16 and 18 in view. Chapter 5, Vocation and Life, combines a Christian philosophy of life itself as “vocation”, with the specific vocations: marriage, single life, religious life, priesthood etc. After trialling and following a proven curriculum, it was thought best to reserve Catholics and Ecumenism, chapter 7 , and Catholics and World Religions, chapter 8, to these final high school levels. Bishop Peter Elliott, General Editor A Tour through the Chapters of Catholic Studies

Utilitarianism or consequentialism analyses potential outcomes to balance risks against potential benefits that research may offer. In stressing the outcomes and calculating cost-benefits, utilitarianism can sometimes be unprincipled. It may allow 'the ends to justify the means' too much, or it may tolerate harm to a minority if this is likely to benefit the majority. by raviii Jul 15