Museum of London – Our games 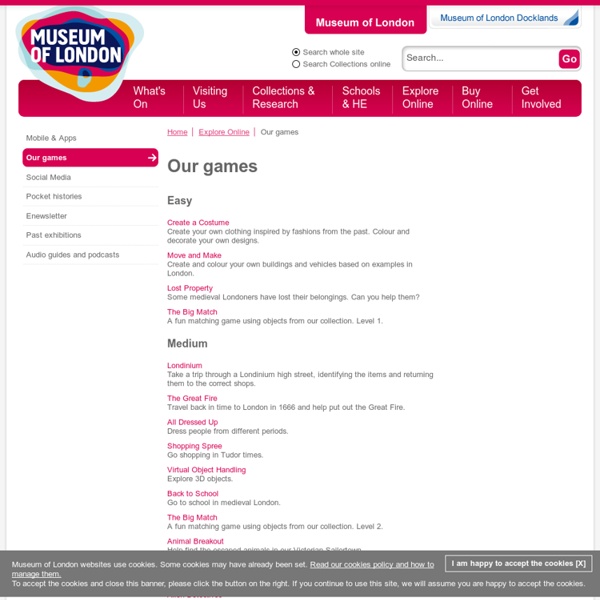 Easy Create a CostumeCreate your own clothing inspired by fashions from the past. Colour and decorate your own designs. Move and MakeCreate and colour your own buildings and vehicles based on examples in London. Lost PropertySome medieval Londoners have lost their belongings. Can you help them? The Big MatchA fun matching game using objects from our collection. Medium LondiniumTake a trip through a Londinium high street, identifying the items and returning them to the correct shops. The Great FireTravel back in time to London in 1666 and help put out the Great Fire. All Dressed UpDress people from different periods. Shopping SpreeGo shopping in Tudor times. Virtual Object HandlingExplore 3D objects. Back to SchoolGo to school in medieval London. The Big MatchA fun matching game using objects from our collection. Animal BreakoutHelp find the escaped animals in our Victorian Sailortown. Hard Alien DetectivesHelp the alien detectives travel through history to find old household objects!

Epic Fail or Win? Gamifying Learning in My Classroom Every week for 17 years, I've heard my students ask, "What do I need to do to get an A?" Historically, many have focused on their grade rather than on fundamental skills. My attempt to change this mindset started two years ago when I gamified learning in my classes. After researching gamification and its potential to help students master skills and processes, I used the 3DGameLab and then Gradecraft to develop and implement game-based learning. In each class, students could choose "quests" that, if completed successfully, earned them badges and experience points. Each open-source badge was developed using Badg.us so that students could take them into the digital universe (e.g. attach to resumes, ePortfolios, etc.) and -- unlike grades on a transcript -- document skills they've mastered.

The crayola-fication of the world: How we gave colors names, and it messed with our brains (part I) “Who in the rainbow can draw the line where the violet tint ends and the orange tint begins? Distinctly we see the difference of the colors, but where exactly does the one first blendingly enter into the other? So with sanity and insanity.”—Herman Melville, Billy Budd Spectral Rhythm. Screen Print by Scott Campbell.

London If you live in London, are visiting England's capital, or are studying London, why not bring... This is Activity Village's collection of original London colouring pages. Take a tour around... Here's a brand new collection of printable word search puzzles, mazes and word scrambles for... Use these fun London postcards - quick and easy to print onto paper, cut out and stick - as a... Just for fun, these simple illustrated posters for younger children feature some of London's...

Klondike - Rush for Gold In the summer of 1897 two ocean going steamers landed on the west coast of the United States. One ship, The Excelsior, landed in San Francisco and three days later The Portland landed in Seattle. Down the gangplank of these two ships went a rag-tag group of men and women carrying sacks of gold. Some walked down the docks with $5,000 worth of gold while others had over $100,000 worth. The miners told of the rich claims they had staked one year earlier on a series of small creeks flowing into the Klondike River. This new goldfield, in the northwest corner of Canada, was said to be the richest gold find in all of history with enough work for tens of thousands of people.

WebQuests: Explanation What are the essential parts of a WebQuest? There are six critical components in a WebQuest: Introduction: The introduction section provides background information and motivational scenarios like giving students roles to play: "You are an underwater research scientist," or "You are an astronaut planning a trip to the moon." It also provides an overview of the learning goals to students. . Horse race dictation It is enjoyable because students are asked to predict the first word, in the same way people try to guess which horse will come first in a race, giving a strong motivation for the short but very intensive listening activity, in the form of a horse race commentary, which gives the solution. PreparationChoose a sentence and write words in random order on the left of the board, as in the example below. You also need to prepare a commentary, which should be challenging enough to make it interesting but not too difficult.

EWG's 2013 Shopper's Guide to Pesticides in Produce™ EWG's 2013 Shopper's Guide to Pesticides in Produce™ Eat fruits and vegetables! The health benefits of a diet rich in fruits and vegetables outweigh the risks of pesticide exposure. Use EWG's Shopper's Guide to Pesticides™ to reduce your exposures as much as possible, but eating conventionally-grown produce is far better than not eating fruits and vegetables at all. Teenagers and UK culture Why bring UK culture to the teen classroom? We can introduce UK culture into the English classroom to help our students improve their English and at the same time learn about values and ways of doing things which may be different to theirs. Learning about life and culture in the UK can be very motivating as it brings the language alive for learners and creates a link between language and real life. See if you agree with these comments from teachers on teaching UK culture to their teenage learners: ‘We need to avoid reinforcing erroneous British stereotypes to our teenagers.