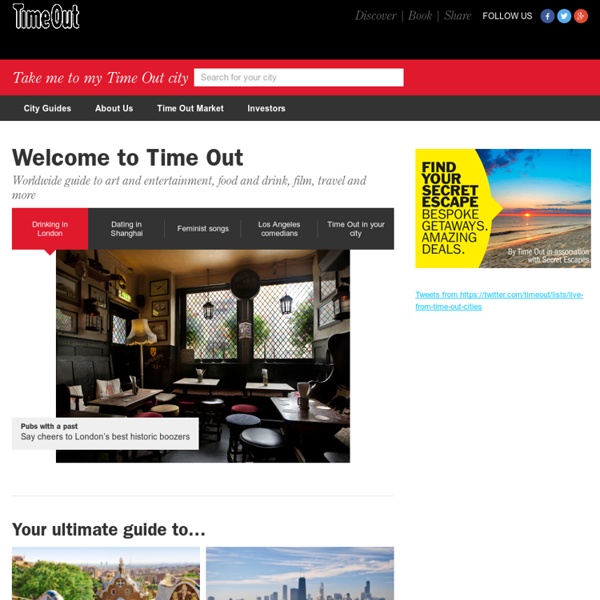 The London Street Food Guide - Compiled by Victoria Philpott Street food in London is tasty, cheap and plentiful – when you know where to look. If you’re looking for cheap eats London is the place to be. The creativity behind our street food stalls when it comes to cooking and serving is inspiring. There really is something for everyone. We’ve asked 40 of the best food and travel bloggers about their top tip on where to eat in London and this is what they said… Erlebnis Tours Maroc - Zagora Things to See & Do At first sight, Zagora is a dusty, single street town. However, its location and festivals save it from being just another dust-filled desert town. In many ways Zagora is the end of the line. If you follow the road from Ouarzazate through the gorgeous Draa Valley until the road ends, this is where you wind up.

22 Incredible Photos of Faraway Places Thailand Chances are you already know Steve McCurry as the man who took one of the most iconic photos of our time. It was of a 12-year-old Afghan refugee girl who's piercing green eyes told us her harrowing story. The image itself was named "the most recognized photograph" in the history of the National Geographic magazine and her face became famous as the cover photograph on their June 1985 issue. London Events Calendar 2013 Copyright Peter Hutchison April's highlights include the display of 250 extraordinary images as part of the world premiere of Sebastião Salgado's 'Genesis', plus an impressive display of works at the London Original Print Fair and the Deutsche Borse Photography Prize. It is also a strong month for comedy with Richard Herring, Milton Jones, Frank Skinner and Jimmy Carr all taking to the stage. Alchemy Festival A ten-day celebration of music, dance, literature, film and more. Alchemy Alchemy Back for its fifth year, , a festival of South Asian culture, brings a mix of dance, music, talks and debates to the .

The 100 Best Books of All Time Many publishers have lists of 100 best books, defined by their own criteria. This article enumerates some lists of "100 best" books for which there are fuller articles. Among them, Science Fiction: The 100 Best Novels (Xanadu, 1985) and Modern Fantasy: The 100 Best Novels (Grafton, 1988) are collections of 100 short essays by a single author, David Pringle, with moderately long critical introductory chapters also by Pringle. For publisher Xanadu, Science Fiction was the first of four "100 Best" books published from 1985 to 1988. The sequels covered crime & mystery, horror, and fantasy. Lists[edit]

Glasgow revealed as the UK city which has inspired the most song titles February 2, 2012 12:01 Scottish city narrowly edges out Edinburgh, Birmingham and Liverpool More Various Artists news, reviews, videos and tour dates Amazing Places To Experience Around The Globe (Part 1) Preachers Rock, Preikestolen, Norway Blue Caves - Zakynthos Island, Greece Skaftafeli - Iceland Plitvice Lakes – Croatia London Events, Concerts, & Festivals Apr 08 - May 08, 2013 London Add Event partner Change Location × London Find Me English Castles English Castles The Norman invasion of 1066 did more to bring castles to England than any other event. When the Duke of Normandy defeated English forces he was crowned William I, the King of England. One of the weapons William used was the castle.

Kilchurn Castle Feature Page on Undiscovered Scotland Many Scottish castles tell the story of the changing times they lived through. It is quite common to find a castle that started life as a stronghold before being converted over the years to first a comfortable, then a showcase, home: or which was abandoned in favour of a nearby fine house when the struggle of conversion became too much trouble, and defence was no longer a priority. Kilchurn Castle evolved in a slightly different way. It was built in about 1450 by Sir Colin Campbell, first Lord of Glenorchy, and it started life as a five storey tower house with a courtyard defended by an outer wall.