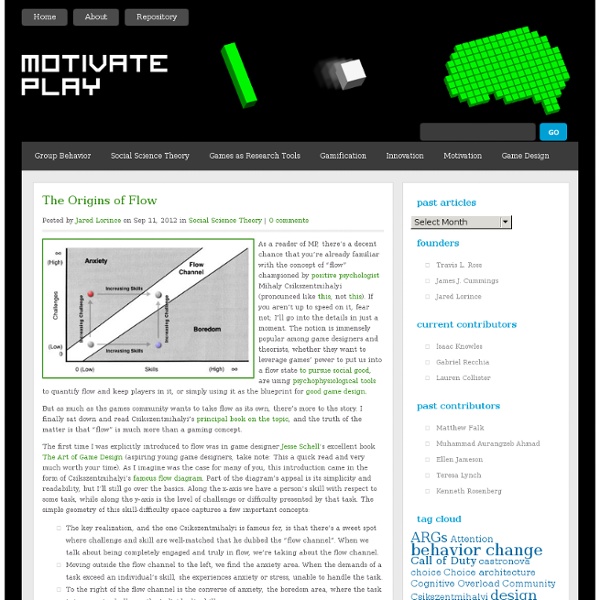 As a reader of MP, there's a decent chance that you're already familiar with the concept of "flow" championed by positive psychologist Mihaly Csikszentmihalyi (pronounced like this, not this). If you aren't up to speed on it, fear not; I'll go into the details in just a moment. The notion is immensely popular among game designers and theorists, whether they want to leverage games' power to put us into a flow state to pursue social good, are using psychophysiological tools to quantify flow and keep players in it, or simply using it as the blueprint for good game design. But as much as the games community wants to take flow as its own, there's more to the story. I finally sat down and read Csikszentmihalyi's principal book on the topic, and the truth of the matter is that "flow" is much more than a gaming concept. The key realization, and the one Csikszentmihalyi is famous for, is that there's a sweet spot where challenge and skill are well-matched that he dubbed the "flow channel". Related:  Games

Welcome to Flow in Games Abstract | Introduction | Foundation | Design Flow in Games | Implement Flow in Games | Conclusion | Bibliography “TWENTY-THREE HUNDRED YEARS AGO Aristotle concluded that, more than anything else, men and women seek happiness...” - Mihaly Csikszentmihalyi (1990) Motivation In the last 30 years, as a form of entertainment, video games have evolved from confined arcade activities into a mature media. Video games have deeply infiltrated our daily life and our society. As if toys expanded every child’s imagination, modern videogames take advantage of a player's active involvement to open more possibilities than any other existing mediums. However, video games are still recognized by the majority, who do not play video games, as shallow and aggression-provoking materials. Due to the nature of marketing and business, making video games purely for non-gamers is too risky and impractical. The quality and the budget of typical commercial video games today can easily reach over 20 million dollars.

Flow theory This article or chapter is incomplete and its contents need further attention. Some information may be missing or may be wrong, spelling and grammar may have to be improved, use your judgment! 1 Definition Flow also called "Optimal experience" is a concept developed by Mihaly Csikszentmihalyi. "the holistic experience that people feel when they act with total involvement" (Csikszentmihalyi, 1975: 36) “… flow – the state in which people are so involved in an activity that nothing else seems to matter; the experience itself is so enjoyable that people will do it even at great cost, for the sheer sake of doing it.” (Csikzentmihalyi, 1991) "A sense of that one’s skills are adequate to cope with the challenges at hand in a goal directed, rule bound action system that provides clear clues as to how one is performing. Csikszentmihalyi (1975) originally identified four flow components: control; attention; curiosity; intrinsic interest. 2 Instruments to measure flow Lloyd P. under construction !

Dissertation « The Dreaming Game Designer This large post has the final version of my dissertation, be advised that the word count came in at 6585 words, it’s a long read but you should be able to just skip to the Further Issues & The Nature of Puzzles sections right at the end without losing out on too much content. The Challenge of Puzzle Solving in Games – Robert Farr Submitted in partial fulfilment of the requirements for the degree of BA in Creative Computer Games Design at Swansea Metropolitan University (Formerly Swansea Institute of Higher Education) Table of Contents Word Count 6585 Chapter 1: Introduction What is a game? In order to do the above it is first necessary to examine the definition of a game as this informs further discussion of the reasons for why adventure games have suffered recently. For simplicity we shall instead focus on a definition authored by game designer Greg Costikyan. What is a First Person Shooter? What is a Graphic Adventure Game? Chapter Summary Chapter 2: First Person Shooter Half-Life Far Cry 2

Refining the flow diagram | Motivate. Play. Last month, I posted on the origins of Csikszentmihalyi's concept of flow, but the diagram I focused on there (and that tends to pervade discussion of flow among game designers) is actually a bit dated. Preparing for a reading group on engagement here at IU, I came across this very readable chapter from the Handbook of Positive Psychology, in it was introduced to a much more nuanced version of the Flow Diagram. If you're familiar with the classic flow diagram, you might notice it has some deficiencies. Most notably, the experience of being in a high-skill, high-challenge state is markedly different that a low-skill, low-challenge state, even though both fall within the so-called "flow channel". As research on flow has progressed, it has become clear that the traditional model needs expansions, and the result is the diagram you see above. I won't go through all the regions in detail here, as the diagram should be clear to interpret by now.

Neurology of Gaming, Infographic « All Kinds of Minds As with most things, “gaming” (or being engaged in video games) has both positives and negatives when it comes to developing minds. Too much gaming, and the positive effects are overshadowed by the negative. Yet, the right balance can add another avenue for pursuing educational goals and achievement. As a result, more and more programs are using gaming to reach and teach students in ways they never could before. Therapy programs, schools, and even research scientists have all benefitted from the strategic use of games to increase successes. Below is an infographic from Online Universities looking at the brain on games. Image: Online University Like this: Like Loading...

The Philosophy of Game Design (part 1) The Escapist Magazine. If you've ever said that a videogame was "bad" for any reason - is evil, is nothing new, is too hard, is pretentious, is inaccessible, is sexist - in the performance of your royal duties as Grand Arbiter of Good Taste, then you also have to define and articulate what is a "good" game for us simple-minded folk. So, what makes a "good" game? Well, it all depends on whether you believe in absolute truth. (No, really!) For purposes of simplification, I will ignore all traditions of ancient philosophy that took place outside of Greece. Aristotle argued for a type of pluralism, where the purpose of a society was to ensure its individual citizens flourished (and by citizens, he meant only the small portion of Greek society that was the educated male land-owning military and gentry - sorry, women and slaves, no flourishing for you!) So, an Aristotelian philosophy of game design would presume the existence of a "citizen" - the hardcore gamer.

Fun is Boring In the two weeks before writing this piece, I've seen easily a dozen scattered, derivative definitions of fun. Five page "manifestos" and weird Rubik's Cube personal philosophies. No respite at DigiPen the other day. "Oh, sweet," says one edgy-looking student. "Neat," I say. I click to the first slide, a cropped image of the cover. "Uhh, Raph?" "Ian Bogost's Persuasive Games?" "I stared at the first page for awhile." "Good enough." Fun is a lazy word. Let's pick on fun, specifically. Fun is a process. Testing early and often doesn't just work out bugs. That fun process sometimes gets a few tries. Hayashida said, "What you have to do is make an investigation at every new stage and say, 'Okay, which of these elements is working well for us, and which of them do we need to think about minimizing, or removing entirely?'" We already have a vocabulary. Cliff Bleszinski was on fire with these ludic linguistics in this interview with Brandon Sheffield.

Making Computer Games Is Easy « Meditations on First Gaming Phil Well, not really. Obviously the process of actually making a real game is laboriously difficult and beset with more problems than you could ever presuppose (which is sort of the point), so difficult that any project of any size will find it hard to ever estimate how long their game will take to make. If we are talking man hours to actual end content making games is ludicrously difficult. So maybe we can say finishing a game is hard, but actually making one? Mario is a paradigm we all understand, controls and rules we are familiar with, so where ever the game wants to pull off its quirk (Time Travel! But that’s the thing. My premier theory for Why All Games Are Shit ™ (Alternatively: Why Gaming Isn’t An Art-form ™ or Why All Mainstream Games Are The Same ™) is that to ever get to the position in any studio that gets its works published you’d already have to A. Which leads me back to the indies. After all, designing games is hard, making games is easy. Like this: Like Loading...