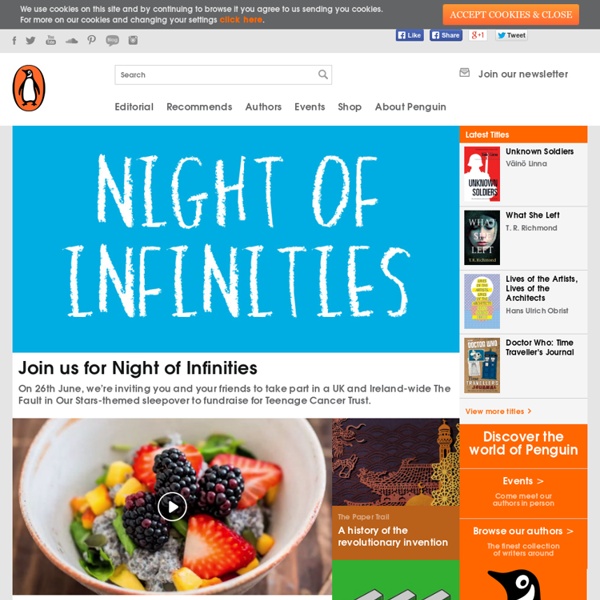 YA Wednesday: Best Teen Books of theYear 2012 has been an embarrassment of riches for Young Adult literature. Some of our favorite series (Maze Runner, Matched) have come to a bittersweet end, but we've discovered a few new series to love (Cinder, Grave Mercy, The Diviners), and read some incredible titles that stand on their own. Thanks to The Hunger Games, 2012 has also seen more and more adults reading and sharing teen books. Really good YA novels get right to it--they draw the reader in within the first 10 pages and hold you captive to the very last one with action, atmosphere, and raw emotion. This week we revealed our Top 20 favorite Teen books of this year and, I will tell you, it wasn't easy narrowing it down and even harder to decide on the #1. We asked John Green about his favorite reads this year--you can see what he had to say after the list of our Top 20 Best Teen Books of the Year. What is your favorite YA book of 2012? Best Teen Books of the Year: John Green's Best Reads of 2012:

Books, eBooks and Audiobooks from The Random House Group The Penguin Podcast by Penguin Books UK Sophie McKenzie's top 10 teen thrillers | Children's books 'The Hunger Games has a fantastic premise, brilliantly realised, as teenagers fight each other to the death on live TV.' Photograph: Murray Close "I have to admit to struggling with all aspects of this list! For a start, how do you pick just 10 books from the amazing range of stories available to young people today? More importantly, what defines a book as a 'teen' novel or, come to that, a thriller? I read (and try to write) books where the central premise draws me in, the characters (of whatever age) are compelling and the story grips and then propels me through the pages. As you'll see from the list below, my definition of thriller is pretty broad – covering fantasy, science fiction, historical and paranormal fiction. Sophie McKenzie is the award-winning author of a range of teen thrillers, including the Missing series (Girl, Missing, Sister, Missing and Missing Me), Blood Ties and Blood Ransom and the Medusa Project series. Find out more about Sophie at sophiemckenziebooks.com 1. 2.

Bookshelf Porn The Penguin Podcast lcenglish1 : A fabulous book, perfect for... Blog A Penguin Classic - Penguin Books Ltd The Count Of Monte CristoAlexandre DumasReviewed by kelly-r When I first received The Count of Monte Christo I was concerned that I'd never be able to finish it because it was so long. However, I soon realised that putting the book down would be more of a problem. The book tells the story of Edmond Dantes as he tries to get vengeance for the wrongs done to him as a young man but also tells of how love can last even through the most difficult times. I normally read modern crime novels, and so this is not a book that I would usually be drawn to. I found the notes very useful while reading the book - they gave enough detail to understand the environment in which the story occurred without giving so much information that you had to break from the plot, yet the book was also easy to read if the notes were ignored. Since reading The Count of Monte Christo I have read The Three Musketeers and now intend to read more of Dumas' books. (full review:

the-50-best-winter-reads-8223466 Fiction: The Yellow Birds by Kevin Powers Sceptre, £14.99 “This intimate novel bears witness to the impact of the US invasion of Iraq on a small cast of soldiers, and is drawn from the author’s own time in the US army,” says Janine. The Hundred Year Old Man Who Climbed Out of the Window... by Jonas Jonasson Hesperus Press, £8.99 “Proof that not all Scandinavian writers are obsessed with murder and dark winters,” says Janine. The Dinner by Herman Koch Atlantic Books, £12.99 “One of those must-read novels about nature vs nurture like The Slap and We Need to Talk About Kevin,” says Janine, “with a series of dark twists and turns.” Valentina by Evie Blake Headline, £7.99 “Set in Italy, it tells the stories of two women, Valentina in 2012 and Belle in 1929, and is both a heartbreaking love story and a romance raunchy enough to keep you warm at night,” says Janine. John Saturnall’s Feast by Lawrence Norfolk Bloomsbury, £16.99 “Norfolk’s book is rich in detail. Penguin Hardback, £20 NW by Zadie Smith

'A Monster Calls' Wins Carnegie and Greenaway Medals A Monster Calls (Walker) achieved a remarkable first on Thursday when author Patrick Ness was awarded the CILIP Carnegie Medal and illustrator Jim Kay scooped up the CILIP Kate Greenaway Medal. No book has ever won both prizes since the Greenaway was first awarded in 1956 (the Carnegie preceded it, in 1936). The result was unanimously reached by the librarian judges, who awarded the medals in separate sessions. For Ness, this year’s success cements his reputation as it gives him the additional achievement of winning the Carnegie Medal in consecutive years. A Monster Calls is a departure for Ness as a writer. Patrick Ness has certainly run with it but, far from making trouble, he has taken it to dizzying heights. For Kay, who has been working as an illustrator for only four years, there is an equal amount of amazement but for different reasons.