UK and BREXIT Perspective for GDPR

Mmissioner: UK 'must avoid data protection Brexit' The UK's new information commissioner has called for the country to adopt forthcoming EU data protection laws, despite its plan to leave the Union. 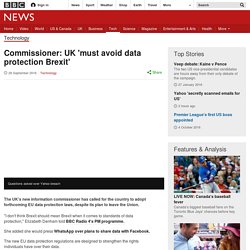 "I don't think Brexit should mean Brexit when it comes to standards of data protection," Elizabeth Denham told BBC Radio 4's PM programme. She added she would press WhatsApp over plans to share data with Facebook. The new EU data protection regulations are designed to strengthen the rights individuals have over their data. The idea is to make companies take the issue of data protection far more seriously. The rules make it mandatory for large companies to employ a data protection officer and data breaches must be reported within 72 hours. The legislation will take effect in 2018 and will apply to any company that handles EU citizens' data, even if that company is not based in Europe. 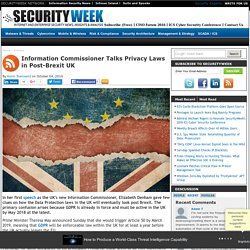 The primary confusion arises because GDPR is already in force and must be active in the UK by May 2018 at the latest. Prime Minister Theresa May announced Sunday that she would trigger Article 50 by March 2019, meaning that GDPR will be enforceable law within the UK for at least a year before the UK actually leaves the EU. Recent debate within the UK has been over whether the government will seek a hard or soft Brexit. A soft Brexit would imply a continued free trading arrangement with Europe in exchange for some allegiance to EU principals. Privacy notice checklist. A blended approach with GDPR in mind: ICO’s Privacy Policy Code of Practice and Checklist. What is the new code and what does it recommend? 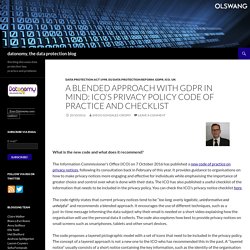 The Information Commissioner’s Office (ICO) on 7 October 2016 has published a new code of practice on privacy notices, following its consultation back in February of this year. It provides guidance to organisations on how to make privacy notices more engaging and effective for individuals while emphasising the importance of greater choice and control over what is done with their data. The ICO has also published a useful checklist of the information that needs to be included in the privacy policy. You can check the ICO’s privacy notice checklist here. The code rightly states that current privacy notices tend to be “too long, overly legalistic, uninformative and unhelpful” and recommends a blended approach. UK organisations could face £122bn in fines under new EU data laws. UK companies and organisations could face huge fines when the European Union's General Data Protection Regulation (GDPR) becomes law. 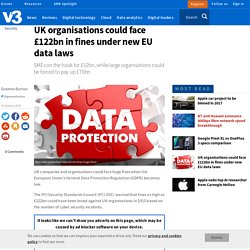 Untitled. In our latest webinar we focused on the impact of data protection on media content, as well as providing an update on the data protection landscape following the results of the UK’s EU Referendum. 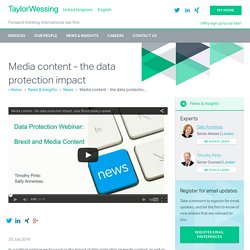 Traditionally, media law was based around defamation and privacy. However, data protection is becoming increasingly important in a media context. Untitled. ICO Code of Practice on Privacy Notices, transparency and control. 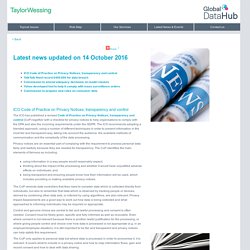 UK firms could face £122bn in data breach fines in 2018. UK businesses could face up to £122bn in penalties for data breaches when new EU legislation comes into effect in 2018, the Payment Card Industry Security Standards Council (PCI SSC) has warned. 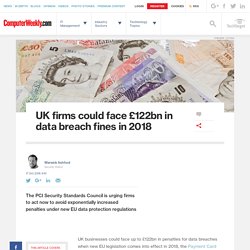 By submitting your personal information, you agree that TechTarget and its partners may contact you regarding relevant content, products and special offers. You also agree that your personal information may be transferred and processed in the United States, and that you have read and agree to the Terms of Use and the Privacy Policy. According to a UK government 2015 information security breaches survey, 90% of large organisations and 74% of SMEs reported a security breach, leading to an estimated total of £1.4bn in regulatory fines. In 2018, the European Union’s General Data Protection Regulation (GDPR) will introduce fines for groups of companies of to €20m or 4% of annual worldwide turnover, whichever is greater – far exceeding the current maximum of £500,000. Global Data & Privacy Update - October 2016. New Euro data protection regime ups the ante for UK pension plan trustees and sponsor groups. UK Prime Minister, Theresa May, has indicated that the Article 50 exit negotiation will be triggered by the end of March 2017. 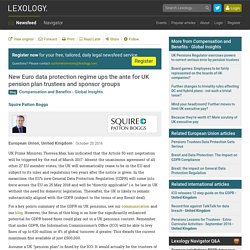 Absent the unanimous agreement of all other 27 EU member states, the UK will automatically cease to be in the EU and subject to its rules and regulations two years after the notice is given. In the meantime, the EU’s new General Data Protection Regulation (GDPR) will come into force across the EU on 25 May 2018 and will be “directly applicable” i.e. be law in UK without the need for domestic legislation. Thereafter, the UK is likely to remain substantially aligned with the GDPR (subject to the terms of any Brexit deal). 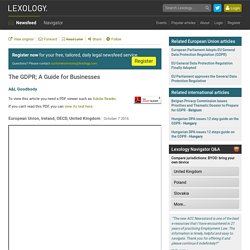 It will come into force on 25 May 2018. The GDPR introduces substantial changes to data protection law. Companies have 19 months remaining in which to make preparations for implementing the new rules, but given its extra-territorial scope, new concepts, (such as privacy by design and by default, and the concept of accountability), along with the severe financial penalties for non-compliance, it would be prudent for businesses to start taking steps now to review and revise their policies and procedures as appropriate.

Date of Publication: 5th October 2016 Disclaimer: A&L Goodbody 2016. 1. The data protection legislation in the post-Brexit scenario. According to the UK Data Protection Authority, it is reasonable to believe that the national data protection laws will remain unchanged at least until exit negotiations will have outlined a new status of the UK outside the EU. 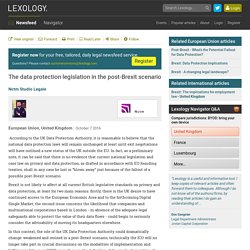 In fact, as a preliminary note, it can be said that there is no evidence that current national legislation and case law on privacy and data protection, as drafted in accordance with EU founding treaties, shall in any case be lost or “blown away” just because of the fallout of a possible post-Brexit scenario. Brexit and data protection: where do we stand? Data Protection and the General Data Protection Regulation in the UK Post-Brexit. Innumerable questions remain about the consequences of the Leave vote in the UK referendum in relation to issues such as the future relationship of the United Kingdom with the rest of the European Union, the changes that will need to be made to domestic law to reflect Brexit, and the scope of the amendments to domestic law if and to the extent that the UK no longer needs to satisfy requirements of EU law.

The Information Commissioner has now made her first public pronouncement on the issue. Data protection is of course an area where Brexit may have an impact. The new Information Commissioner, Elizabeth Denham, has now made her first public speech since being appointed in July. Collection, storage and transfer of data in the United Kingdom. Brexit and IT Law - Implications for data protection law and compliance. GDPR is coming. Summary: Firms should continue to prepare for GDPR.

The BLP data team explain their view in light of recent announcements from the Prime Minister and the Information Commissioner. Recent announcements are strengthening the view that organisations based in the UK will need to prepare for the EU General Data Protection Regulation (GDPR). We have of course known for some time that GDPR will take effect in the EU from 25 May 2018. Data Privacy in the UK Post Brexit.

Following this summer’s vote to leave the European Union, the wider implications of Britain’s decision to break from the EU continue to be felt as governments, businesses, and private citizens look to forthcoming negotiations. Unfortunately, it appears that definitive answers to the questions raised by the vote may not be forthcoming for some time following Theresa May’s October 2 announcement that she plans to trigger Article 50, setting in motion negotiations regarding Britain’s departure, by March 2017. Privacy notices, transparency and control. Op-ed: Brexit will not affect GDPR, Privacy Shield.

August 19, 2016. Lewis Silkin - Our thoughts on Brexit. 01 Sep 2016 With an actual ‘Brexit’ unlikely to be before 2018, there will be both long and short term implications for UK and international businesses. Although nothing is going to change overnight, the referendum vote for the UK to leave the EU presents a host of more immediate questions around your workforce, intellectual property, data and commercial contracts, amongst other areas. Still in Denial of the Tough New Privacy Law GDPR? Posted by Tara Taubman-Bassirian on October 17, 2016. BREXIT: UK data protection laws should develop 'on an evolutionary basis' post-Brexit, says new information commissioner. Brexit data protection: the privacy laws set to be hit by leaving the EU deadline. Matt Cardy / Getty. ICO: Firms Must Follow GDPR Pre Brexit.

‘Biggest danger is apathy': John Lewis data privacy boss on EU data protection laws. Brexit may have created a lot of uncertainties for businesses, but one thing is clear: British businesses will likely have to comply with the same data protection laws as Europe if they want to continue trading as a single market. And that means marketers need to start getting a handle on how to prepare for the General Data Protection Regulations, which will roll out in 601 days.

Retailer John Lewis appointed former Unilever chief privacy officer Steve Wright to the role of group data privacy and information security officer six months ago. He spoke at the Direct Marketing Association GDPR event on Friday, about how brands can start preparing for the updates. “My biggest worry is that this is all set against a backdrop of confusion,” he said. “The biggest danger is apathy, that tendency to just bury heads in the sand. Advertisement. Does the Brexit Vote Impact the GDPR? The GDPR after Brexit – UK firms prepare to disentangle a political mess. Business costs of adapting to data protection reforms will increase the longer companies wait, says expert. The impact of brexit for uk data protection law (july 2016) Brexit ‘will be delayed until end of 2019’ Despite Brexit, businesses need to start preparing for the General Data Protection Regulation.