FLUENT - Test Your Knowledge of English, a game for ESL learners 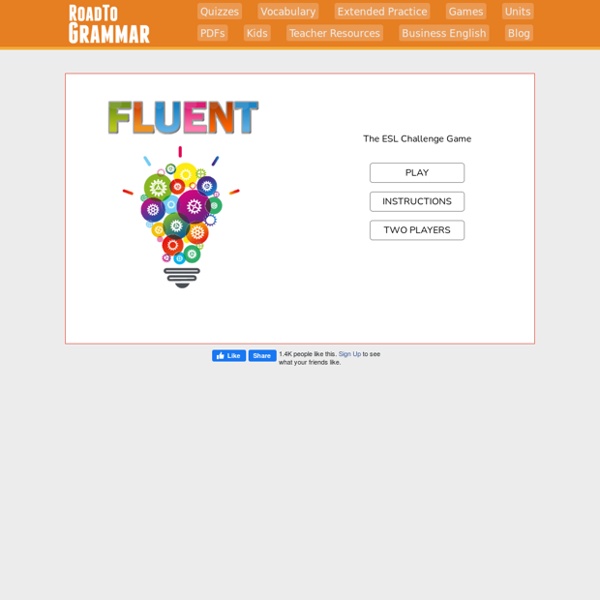 Word Dominoes – tekhnologic The other week I wanted an activity that would allow students to have a controlled practice that could be done in small groups, but had a repetitive quality to really practice the target language. I decided on dominoes. Dominoes is another activity that is an old favorite in the ESL classroom. If I were / If I was Take a look at the two following sentences. Why do we use were in the first sentence and was in the second. If I were rich, I would buy you a car. If she was feeling sick, it's good that she went home. Explanation If I were rich...<-- I am not rich, but I imagining what I would do if I were. Fun Ten entertaining ways to practise personality adjectives with activities for all ages and levels. In this post, you’ll find listening,writing, speaking activities and games to help students master this vocabulary. Blog de Cristina is also on Facebook.

Irregular Verbs Bingo Cards These cards are about Irregular Verbs. Irregular verbs are verbs that don't form their past tense by adding "ed". Some verbs don't change at all (e.g. cut, fit), some change their vowel (e.g. sit/sat), and some change completely (e.g. teach/taught). Three Geography Games Based on Google Maps and Google Earth One of the things that I emphasize to students before they embark on any kind of research or problem-solving task is to take a good long look at the information that they already have before them. To that end, I'll often request that they construct a list of what they know about a topic or problem before they begin to search. Playing one of the following three Google Maps-based games is a fun way to reinforce the concept of using prior knowledge and observations.

Voice in English Grammar: Rules, Myths and Mistakes About the Passive and Active Voice Uh oh—did you mess up? Broke your spouse’s favorite lamp? Forgot to pick your friend up from the airport? Showed up an hour late to work? Just use a little trick that English speakers have to get out of trouble. It’s called the passive voice. Ellen DeGeneres’ New iPhone/iPad Game Is Great For ELLs & You Can Use The Idea & Play Without Tech, Too Ellen DeGeneres has just unveiled a great new iPhone/iPad games called Heads Up! that is perfect for English Language Learners. However, according to TechCrunch, it’s just a high-tech version of an old party game called “Who Am I?” 5 Fun Activities for Irregular Verbs In English, the simple past tense is formed by adding -ed to the end of the regular verbs. If only all past verbs were that easy! The problem for English language learners is the many, many changes that occur when forming the past tense of irregular verbs. Sometimes the vowel changes (come – came), sometimes the pronunciation changes (read – read), and sometimes the whole word changes (eat – ate). Sometimes there seems to be a pattern (throw – threw, know – knew), but there are always exceptions (snow – snowed). English language learners can become discouraged with what they perceive as the endless memorization ahead of them, so English teachers can help by introducing fun activities for learning and reviewing irregular verbs.

How to Play Crumple & Shoot I learned how to play Crumple and Shoot from Doris Gannon, a reading teacher I worked with in my first job, and since then I’ve passed it on to more people than I can remember. It works with students from elementary school through college, and I’ve never had a group who didn’t eventually beg me to play it. Plus, it’s so easy, you could literally start playing it the minute you finish reading these instructions. The only real requirement is that your students need to be able to write easily, so it might not work as well with very young students. Jimmy Fallon Plays A NEW Game Applicable To The ELL Classroom I’ve shared a number of games that Jimmy Fallon has played on The Tonight Show that I’ve adapted for my ELL Classroom (you can read about, and see, them at The Best Ideas For Using Games In The ESL/EFL/ELL Classroom). Earlier this week, he played a new one (or, at least, it was new to me). He calls it “Word Blurt” and you can see a video of him playing it below. Truth be told, I don’t think it’s as entertaining to watch, nor as useful in the classroom, as his previous ones.