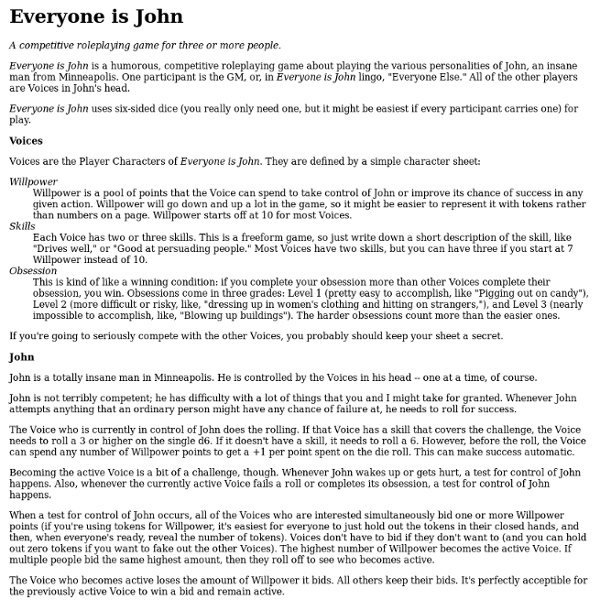 A competitive roleplaying game for three or more people. Everyone is John is a humorous, competitive roleplaying game about playing the various personalities of John, an insane man from Minneapolis. One participant is the GM, or, in Everyone is John lingo, "Everyone Else." All of the other players are Voices in John's head. Everyone is John uses six-sided dice (you really only need one, but it might be easiest if every participant carries one) for play. Voices Voices are the Player Characters of Everyone is John. Willpower Willpower is a pool of points that the Voice can spend to take control of John or improve its chance of success in any given action. Skills Each Voice has two or three skills. Obsession This is kind of like a winning condition: if you complete your obsession more than other Voices complete their obsession, you win. If you're going to seriously compete with the other Voices, you probably should keep your sheet a secret. John John is a totally insane man in Minneapolis. Playing

Unknown Horizons - Welcome to Unknown Horizons Zombies in Fantasyland - or creating a fantasy world that experienced a zombie apocalypse 100 years ago. Note: If you want to follow the development of the Aruneus world, just click this . Bookmarking that will bring you back to the latest news. A friend and I are working on a high fantasy zombie apocalypse setting for play amongst our yet-to-be-formed group. We were toying with the idea of your standard, garden variety zombie apocalypse taking place in a standard, garden variety high fantasy world. This is more a series of notes than anything else but we’d really, really like to see your comments. Most likely a D20 system. 100 years ago, a zombie apocalypse happened. In the present, the population of intelligent races has shrunk to about 5% of what it once was. Societies are bootstrapping and starting to pull themselves together. Humans are susceptible to the disease – one bite = zombification. Zombies will instinctively attack and try to consume any warm blooded creates. This means that a large portion of this worlds population has been killed off. Clerics have become the new nobility. Today

Old PC Games - homepage 750 things Mr. Welch can no longer do in a RPG From RPGnetWiki (More than) is a list of actions PCs (personified as "Mr. Welch") should never take in a role-playing game. While many of the entries are based on actual games, other entries are entirely fictional. Inspired by " Skippy's List: The 213 things Skippy is no longer allowed to do in the U.S. Cannot base characters off The Who's drummer Keith Moon. A one-man band is not an appropriate bard instrument. There is no Gnomish god of heavy artillery. My 7th Sea character Boudreaux is not 'Southern' Montaigne. Not allowed to blow all my skill points on 1-pt professional skills. Synchronized panicking is not a proper battle plan. Not allowed to use psychic powers to do the dishes. 'How to Serve Dragons' is not a cookbook. My monk's lips must be in sync. Just because my character and I can speak German, doesn't mean the GM can. Not allowed to berserk for the hell of it, especially during royal masquerades. Must learn at least one offensive or defensive spell if I'm the sorcerer. My 3rd ed. Mr.

LinuxGames - Embrace your inner penguin Games On Net :: For all your latest Gaming News, Files, Servers & Discussion - Powered by Internode