Britain’s delusions about the green belt cause untold misery. IF ANYTHING deserves the label “wasteland”, this place does. 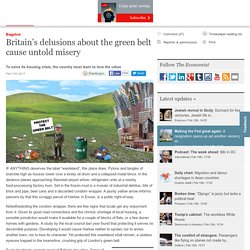 Pylons and tangles of bramble high as houses tower over a lonely oil drum and a collapsed metal fence. In the distance planes approaching Stansted airport whine; refrigerator units at a nearby food-processing factory hum. Britain facing energy crisis that could see families pay extra to keep the lights on while neighbours 'sit in the dark' UK energy: how much, what type and where from? The UK is consuming less energy than it did in 1998 and more of the energy we are consuming is coming from renewable sources. 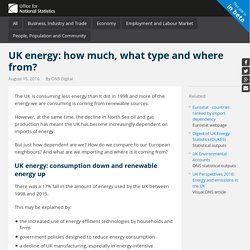 However, at the same time, the decline in North Sea oil and gas production has meant the UK has become increasingly dependent on imports of energy. But just how dependent are we? How do we compare to our European neighbours? And what are we importing and where is it coming from? UK energy: consumption down and renewable energy up. Wind turbines 'could supply most of UK's electricity'

Wind turbines could soon supply most of the UK’s electricity, the boss of the country’s largest windfarm operator has said, as he confirmed plans to sell its oil and gas division. 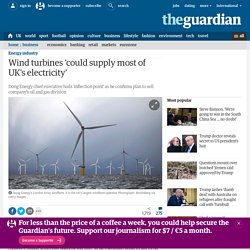 Dong Energy said the sale would underpin its plan to become a “global leader in renewables”, 44 years after the company was set up to exploit Denmark’s North Sea oilfields. The chief executive pointed to the tumbling cost of green energy as evidence that wind and solar could supplant fossil fuels quicker than expected. “When you look back in 10 years from now, we’ll see this period around 2016-17 as an inflection point,” Henrik Poulsen said. “The cost of offshore wind, also solar and onshore wind, is coming down at such speed that nobody could have predicted.” Dong Energy is the UK’s largest windfarm operator with stakes in planned or existing projects able to produce five gigawatts (5GW), more than the planned Hinkley Point C nuclear reactors. 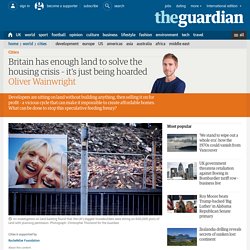 “They’re not making it any more.” “Then once you’ve bought it, sit on it for a while, apply for planning permission, and sell it on for 10 times the price!” Retort the land traders. Devolve power to London as a blueprint for other major UK cities – report. A faster pace of devolution to the capital would provide a blueprint for Britain’s major cities to take control of their destiny, according to a report for the mayor of London, Sadiq Khan. 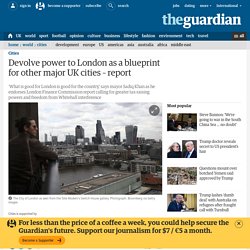 With greater tax-raising powers and the freedom to implement policies to stimulate the local economy without Whitehall interference, London’s politicians would be in a position to show Manchester, Birmingham and Liverpool how to prosper following the Brexit vote. Khan endorsed the findings of the London Finance Commission with a call to ministers to set London free from Whitehall control “because what is good for London is good for the country”. He said London was uniquely tied to central government funding compared with other capital cities and, unlike them, struggled to develop policies tailored to its own needs without first winning central government approval.

The commission said London needed to get near the 50% to 70% independent funding that is common in other capitals. The radical model fighting the housing crisis: property prices based on income. A forbidding clock tower rises above the arched windows of a former Victorian workhouse in east London’s Mile End, behind a hoarding which trumpets the conversion of the crusty old pile into an enclave of luxury apartments. 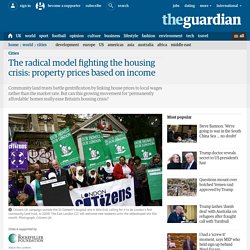 The mortuary, morbidly located next to a graveyard at the end of this brutal conveyor-belt complex, has been reborn as The Lodge, a two-bed flat for £999,995 – the kind of inflated price that is increasingly familiar, even here in one of London’s poorest boroughs. But buried among the workhouse chic and the new brick apartment blocks is an unlikely experiment in building homes that will remain affordable to local people forever.

After a decade of campaigning, the East London Community Land Trust has succeeded in creating housing where the prices will be linked to local income in perpetuity, entirely detached from the superheated speculation of the property market. “As soon as I heard about the community land trust, it was a no-brainer,” she says. Bird species vanish from UK due to climate change and habitat loss. How green is your city? UK's top 10 mapped and ranked. Law needed to limit Brexit's environmental impact, say MPs. Image copyright Getty Images Brexit poses a huge risk to UK wildlife and habitats and a new environmental law will be needed, MPs have said. 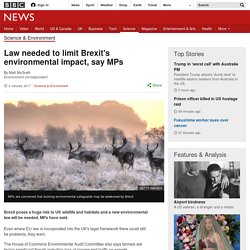 Even where EU law is incorporated into the UK's legal framework there could still be problems, they warn. The House of Commons Environmental Audit Committee also says farmers are facing significant threats including loss of income and tariffs on exports. The government says it is committed to safeguarding and improving existing environmental protection. UK government not funding natural flood prevention methods. Natural ways of preventing flooding such as planting trees have no government funding despite ministers repeatedly backing the idea, according to a freedom of information request by Friends of the Earth. 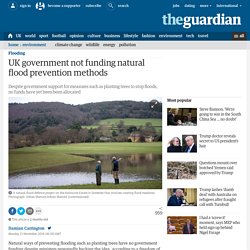 Almost a year since devastating floods hits swathes of northern Britain, environment secretary, Andrea Leadsom, and floods minister, Thérèse Coffey, have both recently supported the approach, which aims to slow the flow of water off hills and reduce peak levels. But the Department of Environment, Food and Rural Affairs (Defra) told Friends of the Earth (FoE) that “there is no funding earmarked specifically for natural flood management”. The response came shortly after a cross-party committee of MPs concluded earlier this month that natural ways of stopping floods must be a key part of protecting the nation as climate change intensifies rain storms. “But so far it’s been all talk and no action.

Delayed HS2 second-phase route unveiled. The preferred route for the second phase of HS2 has been published, setting out exactly where the government will build the high-speed rail network through the north of England – although a controversial decision on how to run the line to Sheffield has been delayed once again. 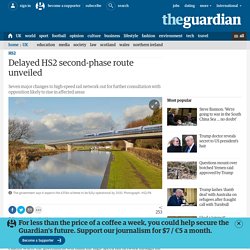 Seven significant alterations to the original route are being put out for further consultation, with some likely to provoke outcry in affected areas. The transport secretary, Chris Grayling, said he “felt desperately sorry” for those residents affected, who he said would be “treated with fairness, compassion and respect”. Green group wins air pollution court battle. Image copyright PA Campaigners have won the latest battle in legal action against the UK Government over levels of air pollution. 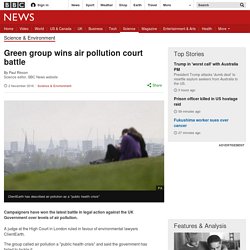 A judge at the High Court in London ruled in favour of environmental lawyers ClientEarth. The group called air pollution a "public health crisis" and said the government has failed to tackle it. The ruling in the judicial review called the government's plan "woefully inadequate". Young people urged for park-life views. Young people are being asked how important parks are to them and how they would like to see them improved. Charity Groundwork's #GiveUsSpace campaign wants young people to voice their views on parks, which are under threat as budgets are reduced. A parliamentary inquiry is currently assessing the impact of local authority budget cuts on parks, and whether these open spaces' future are under threat. An estimated 2.7 billion visits each year are made to the UK's 27,000 parks.

"One of the things that we at Groundwork have been very conscious about over the years is that young people get a particularly raw deal," said Graham Duxbury, chief executive of the environment charity. "If you look at the evidence, young people are one of the groups in society that spend more time in their local park, and surveys have shown that they are also more unsatisfied with their park than other groups within society.

" Five facts about… the UK service sector. The most recent estimates gathered by the Office for National Statistics from more than 23,000 firms suggest that the output of the services sector – which accounts for three quarters of the economy – grew strongly in July 2016 – up 0.4% from June 2016. While ONS always warns against focusing too much on month-on-month growth rates, this fresh data on the service sector tends to support the view that there has been no sign of an immediate shock to the economy, following the vote to leave the European Union, although the full picture will continue to emerge. Alongside today’s release, here are five key things you need to know about the UK service sector and its importance to the UK economy.

Tech Talent: Map of the UK's digital clusters. Image copyright Thinkstock. How the other three-quarters live. Cumbria claims Britain’s newest mountain as persistence pays off. As a Cumbrian hill in the Yorkshire Dales is offically declared a mountain by a mere six millimetres, Geographical talks to summit mapper Myrddyn Phillips about what defines a mountain Last week, the Ordnance Survey made a mountain out of an old hill – Calf Top in the Yorkshire Dales.

The beige loaf of a mount, dusted occasionally with snow, surpassed the mountain threshold by just six millimetres. A quarter of an inch. One third of a five pence coin. ‘A hill needs to be 609.6 metres, or 2,000 feet, above sea level to be classified as a mountain,’ says Welsh hill walker and mountain expert, Myrddyn Phillips. Luckily, a small margin was all Calf Top needed. Why is 609.6 metres the magic number between mountainous glory and hilly ignominy? In Scotland, where the Highland fault line has created thousands of peaks at much higher elevations, there is less need for a distinction between the two. UK's public parks face 'decline and neglect' The UK’s hugely popular public parks face falling into decline and neglect as a result of budget cuts, a new report warns. Park use is rising, with 57% of adults now visiting their park once a month or more, while 90% of families with children under five head to their local green space at least monthly, the State of UK Public Parks 2016 study reveals.

But the Heritage Lottery Fund (HLF) study warns a decline in the condition of parks predicted in a first report in 2014 is set to continue, with almost all park managers experiencing ongoing cuts as austerity squeezes local authority budgets. These EU countries buy the most from Britain. Credit Suisse has produced a handy graphic showing which European Union members buy the most British-made goods. Green energy offers dowdy ports a new means of regeneration. In pictures: Britain from the air. The Ordnance Survey's flying unit is in the skies between February and November each year, surveying and capturing about 50,000 images covering Britain's urban, rural, moorland and mountain terrain.

China warns of 'crucial juncture' over Hinkley delay. Dartmoor beauty spot is battleground for Britain’s threatened woodlands. Warming unlikely to limit chances of UK soggy summers. Personal well-being in the UK - Office for National Statistics. How rare is a month's rain in a day? Oxford Street to be pedestrianised by 2020. UK: Families opening doors to refugees - News from Al Jazeera. Earth - How is the unpredictable weather affecting our wildlife? England's first stretch of south-eastern national coastal path opens.