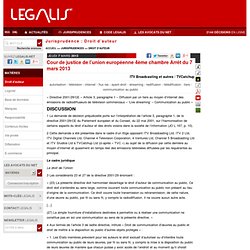 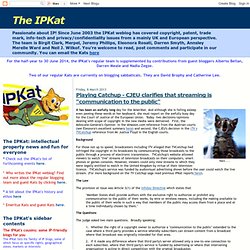 And although she is falling asleep even pawing these words at her keyboard, she must report on the awfully busy day for the Court of Justice of the European Union. Today two decisions/opinions dealing with scope of copyright in the new media were delivered. First, the Advocate-General's Opinion in the Amazon.com reference from the Austrian courts (see Eleonora's excellent summary here) and second, the CJEU's decision in the ITV v TVCatchup reference from Mr Justice Floyd in the English courts. Background. Documents. Language of document : PAOLO Mengozzi presentate il 7 marzo 2013 (1) Causa C‑521/11 Amazon.com International Sales Inc. 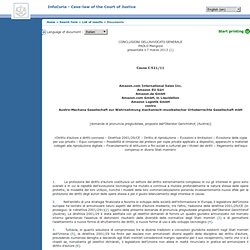 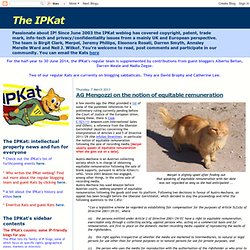 Documents. Language of document : JUDGMENT OF THE COURT (Fourth Chamber) (Directive 2001/29/EC – Article 3(1) – Broadcasting by a third party over the internet of signals of commercial television broadcasters – ‘Live streaming’ – Communication to the public) In Case C‑607/11, REQUEST for a preliminary ruling under Article 267 TFEU from the High Court of Justice (England and Wales) (Chancery Division) (United Kingdom), made by decision of 17 November 2011, received at the Court on 28 November 2011, in the proceedings ITV Broadcasting Ltd, ITV 2 Ltd, ITV Digital Channels Ltd, Channel 4 Television Corporation, 4 Ventures Ltd, Channel 5 Broadcasting Ltd, 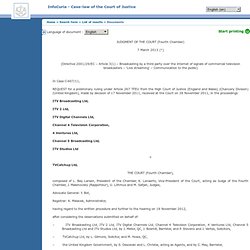 A Winter's Tale: if you can't take the heat, keep away from the Kitchin. Saucy attempt by Catchup fails to cut the mustard. 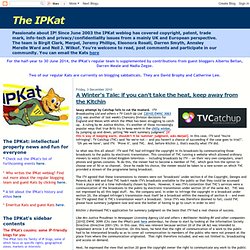 ITV Broadcasting Ltd and others v TV Catch Up Ltd [2010] EWHC 3063 (Ch) was another of last week's Chancery Division decisions for England and Wales with which the IPKat has been struggling to catch up. A ruling by Mr Justice Kitchin, it's another of those increasingly popular ways that true Brits try to keep warm in the chilly winter, by jumping up and down, yelling "We want summary judgment" [If this is way of keeping warm, shouldn't it be 'summer' judgment, asks Merpel]. In this case, ITV said "You're infringing"; TV Catchup (TVC) said "No we're not -- and you haven't a chance of succeeding if the case goes to trial! ". "Oh yes we have", said ITV.

"Prove it", said TVC. So what was this all about? TV Catchup case goes to Europe. Cast your mind back to last December and you might recall, though the midst of winter's murky memories, a bright and cheeky interlude in which the recently-promoted Mr Justice Kitchin starred, ITV Broadcasting Ltd and others v TV Catch Up Ltd[2010] EWHC 3063 (Ch). 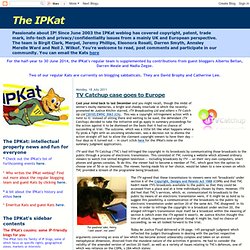 ITV Broadcasting Ltd & Ors v TV Catch Up Ltd [2010] EWHC 3063 (Ch) (25 November 2010) TV Catchup case goes to Europe. Caught out: TV streaming service forced to drop 21 channels in copyright infringement case. The English High Court has ordered TVCatchup to stop some of its services after ruling that they infringed the copyright of broadcasters. 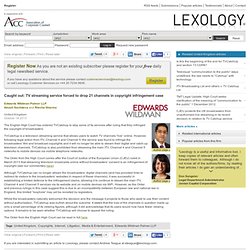 TVCatchup is a television streaming service that allows users to watch TV channels “live” online. However, following legal action from ITV, Channel 4 and Channel 5, the service was found to infringe the broadcasters’ film and broadcast copyrights and it will no longer be able to stream their digital and catch-up television channels. TVCatchup is also prohibited from streaming the main ITV, Channel 4 and Channel 5 networks to mobile devices via mobile telephone networks. Unauthorised TV live streaming breaches copyright, rules European court.

Websites that retransmit live TV over the internet without permission from broadcasters are in breach of copyright, Europe's highest court has ruled in a judgment with wide ranging implications. 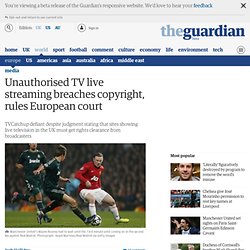 The landmark ruling published on Thursday by the European court of justice (ECJ) means that dozens of sites showing live TV in the UK, including the London-based TVCatchup.com, must now get rights clearance from broadcasters. Legal experts said the decision was likely to spark a renewed clampdown by rights holders against similar sites, many of which show live sport. The case was brought by ITV, Channel 4 and Channel 5 against TVCatchup.com, which streams free-to-air shows from the BBC, ITV and Channel 4. The ECJ decided that the website, which carries pre-roll advertising before shows, was in breach of a 2001 law that describes the original broadcasters as "authors" of the programming, giving them the exclusive right to approve or restrict its use. 1. 2. 3.