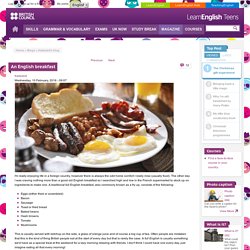 The other day I was craving nothing more than a good old English breakfast so I searched high and low in the French supermarket to stock up on ingredients to make one. A traditional full English breakfast, also commonly known as a fry up, consists of the following: Eggs (either fried or scrambled) Bacon Sausage Toast or fried bread Baked beans Hash browns Tomato Mushrooms This is usually served with ketchup on the side, a glass of orange juice and of course a big cup of tea.

Often people are mistaken that this is the kind of thing British people eat at the start of every day but that is rarely the case. A standard breakfast in the UK really varies from person to person. I am enjoying breakfasts in France, though - fresh bread and croissants from the bakery are a perfect start to my day! An English afternoon tea party.

Most weekends, my friends and I cook something all together and have a fun themed party. 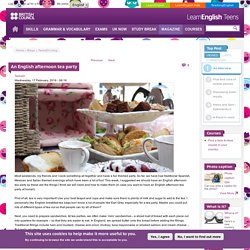 So far, we have had traditional Spanish, Mexican and Italian themed evenings which have been a lot of fun! This week, I suggested we should have an English afternoon tea party so these are the things I think we will need and how to make them (in case you want to have an English afternoon tea party at home!) : First of all, tea is very important! Use your best teapot and cups and make sure there is plenty of milk and sugar to add to the tea. Next, you need to prepare sandwiches. Then, every tea party needs scones!

Politics. School. Traditions. A trip to Cambridge. Stereotypes ... true or false? I have just returned to the UK after a year living abroad in France. 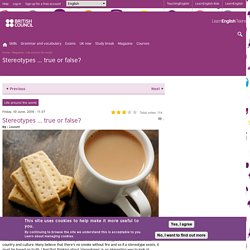 Something that really struck me while I was away from home was the fact that very often the people I met would talk about ‘stereotypes’. It is inevitable when you meet someone who comes from a foreign country that your mind evokes associations and compares that person with the stereotypes connected with their country and culture. Many believe that there’s no smoke without fire and so if a stereotype exists, it must be based on truth.

Mi6 answers 0. Mi6 exercises 0. MI6: The British Secret Intelligence Service. You might have heard of MI6 through the man known as 007. 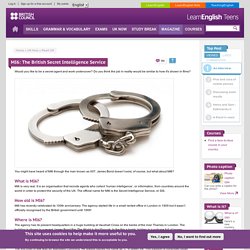 James Bond doesn’t exist, of course, but what about MI6? What is MI6? MI6 is very real. It is an organisation that recruits agents who collect ‘human intelligence’, or information, from countries around the world in order to protect the security of the UK. The official name for MI6 is the Secret Intelligence Service, or SIS. Shakespeare answers 6. Shakespeare exercises 5. Shakespeare. William Shakespeare was a poet and a playwright, and is widely regarded as the greatest writer in the English language. 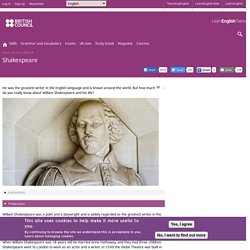 He was born in Stratford-upon-Avon, in central England, in 1564 and he died in 1616. His surviving work consists of 38 plays, 154 sonnets (a special type of poem with 14 lines) and some other poems. He is best known for his plays, which have been translated into every major language and are performed more than those of any other playwright in the world. When William Shakespeare was 18 years old he married Anne Hathaway, and they had three children. Shakespeare went to London to work as an actor and a writer. Shakespeare’s work is still very popular today. 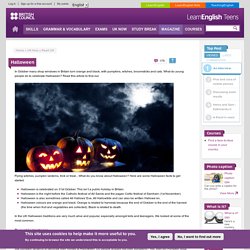 What do you know about Halloween? Here are some Halloween facts to get started. Halloween is celebrated on 31st October. This isn’t a public holiday in Britain. Halloween is the night before the Catholic festival of All Saints and the pagan Celtic festival of Samhain (1st November). In the UK Halloween traditions are very much alive and popular, especially amongst kids and teenagers. Pumpkin lanterns These are pumpkins (an orange, football-sized vegetable) with the inside removed and a nose, eyes and mouth cut into one side. 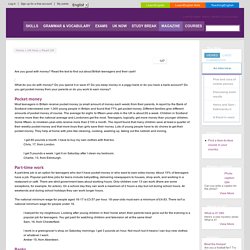 Do you spend it or save it? Do you keep money in a piggy bank or do you have a bank account? Do you get pocket money from your parents or do you work to earn money? Pocket money. Online safety UK. 96% of young people in the UK regularly use the internet to communicate according to a survey of 24,000 British people aged 9-11. 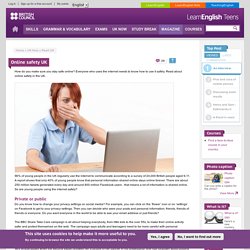 A report shows that only 40% of young people know that personal information shared online stays online forever. There are about 250 million tweets generated every day and around 800 million Facebook users - that means a lot of information is shared online. So are young people using the internet safely? Private or public Do you know how to change your privacy settings on social media? The BBC Share Take Care campaign is all about helping everybody, from little kids to the over 55s, to make their online activity safer and protect themselves on the web.