British vs. American Ads: Which TV Commercials Make You Blush? At the risk of turning this into a “Which is better?” 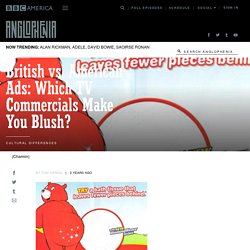 Debate, it’s fair to say that there’s quite a difference between British and American TV ads. What one viewing audience finds acceptable is often highly inappropriate to the other and I find myself saying “I can’t believe they just showed that” on both sides of the Pond. British ads definitely push the envelope when it comes to suggestive and titillating content. After much complaining and gnashing of teeth by a section of the British viewing public, this Iron Bru TV ad was deemed suitable for family viewing by the Advertising and Standards Authority (ASA). For Brits, it wasn’t so much the humongous boobs bursting out of a low cut sweater, but the possibility of an inappropriate relationship between mother and son (or his friends) that was all too much. It is a little racy though isn’t it? But I have screwed up. You know the ads I’m talking about? (Be warned Brits, there is no “watershed” on American TV. Why Aren't Christmas Ads as Big a Deal in the U.S. as They Are in the U.K.? 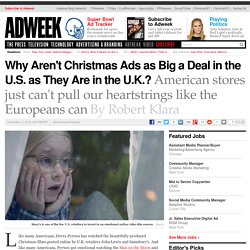 And like many Americans, Pyrwes got emotional watching the Man on the Moon and Mog the Cat, and she shared these videos on social media, just as tens of millions of other Americans did. But mixed in with the warm and fuzzy holiday feelings these ads stirred up, Devra Pyrwes experienced another emotion: frustration. Because Pyrwes is an American marketer who works for a U.K. firm, the Unruly Group, which specializes in Web video content, and every year at this time she ponders the same question: If U.K. retailers are generating such enormous Web traffic and overall goodwill for their brands with touching short films, why don't their U.S. counterparts do the same?

"It's such a missed opportunity," she says. The mix she's referring to is Unruly's annual list of Top 10 Christmas spots ranked by social sharing. But American retailers? Seven culture-defining differences between UK and US ads. To understand the difference between British and American humour, simply look at Alan Partridge. 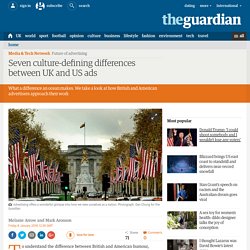 To us Brits, a man from Norwich who has bounced back, who’s prone to deadly scotch egg breath and piercing his foot on a spike is simply hilarious. Yet to most Americans, conditioned to hold a wildly different cultural mindset, it makes little sense, being far too riddled with small-island anxieties for inhabitants of a massive nation to truly “get”. It is no wonder then, that advertising, the perennial cultural repository, is vastly different in the UK than in the US. A few months ago an American tourist’s long list of observations on the UK went viral.

TV Ads US & UK. It is nothing new to say that every Brit who goes to America is shocked by the number and frequency of ads on American television. 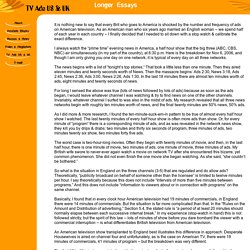 As an American man who six years ago married an English woman -- we spend half of each year in each country -- I finally decided that I needed to sit down with a stop watch & calibrate the exact difference. I always watch the “prime time” evening news in America, a half hour show that the big three (ABC, CBS, NBC) air simultaneously (in my part of the country), at 6:30 p.m. Here is the breakdown for Nov 6, 2006, and though I am only giving you one day on one network, it is typical of every day on all three networks. The news begins with a list of “tonight’s top stories.“ That took a little less than one minute. Then they aired eleven minutes and twenty seconds worth of News.

As I did more & more research, I found the ten-minute-suck-em-in pattern to be true of almost every half hour show I watched. The worst case is two-hour-long movies. Differences Between American and British Advertising - Scratchpad - Wikia. England =/= Britain.... 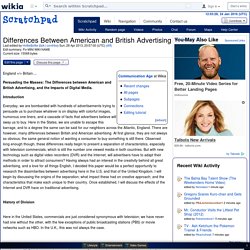 Persuading the Masses: The Differences between American and British Advertising, and the Impacts of Digital Media. Introduction Everyday, we are bombarded with hundreds of advertisements trying to persuade us to purchase whatever is on display with colorful images, humorous one-liners, and a cascade of facts that advertisers believe will sway us to buy. Here in the States, we are unable to escape this barrage, and to a degree the same can be said for our neighbors across the Atlantic, England. Advertising: US vs. UK. The British Independent newspaper has an entertaining article that compares the US and UK's advertising industries. 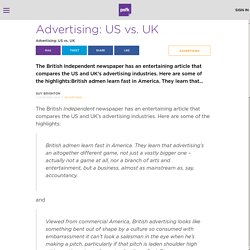 Here are some of the highlights:British admen learn fast in America. They learn that... The British Independent newspaper has an entertaining article that compares the US and UK’s advertising industries. Differences in British and American Television and Magazine Advertising: Myth Or Reality? by Marc G. Weinberger and Harlan Spotts.