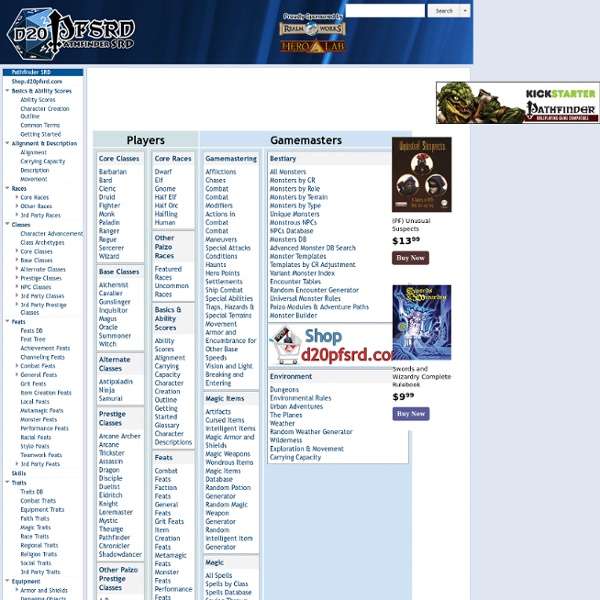 Javascript Pathfinder Character Generator (Core Rules) Javascript Pathfinder Character Generator (Core Rules) This big javascript program runs best on "Netscape" browsers. It performs poorly on "Google Chrome." It does not work on some versions of "Opera" and "Safari"; if someone can tell me what I need to do to make the code compatible with these browsers, I would be most grateful. Mapping Software - Forums > Home - Forums Product Info - Store Forums - Free Art Armor and Shields For most, armor is the simplest way to protect oneself in a world of rampant threats and dangers. Many characters can wear only the simplest of armors, and only some can use shields. To wear heavier armor effectively, a character can select the Armor Proficiency feats, but most classes are automatically proficient with the armors that work best for them. Here is the format for armor entries (given as column headings on Table: Armor and Shields).

Javascript Dungeons and Dragons 4th Edition Character Generator Thanks to everyone who has written me during the past few weeks expressing appreciation for my character generators. I am happy that I can now bring most of them back online. Click here for the SRD and here for the Game System License. Special Materials Weapons, armor and some other items can sometimes be crafted using materials that possess innate special properties. If you make a suit of armor or weapon out of more than one special material, you get the benefit of only the most prevalent material. However, you can build a double weapon with each head made of a different special material. Each of the special materials described below has a definite game effect. Some creatures have damage reduction making them resistant to all but a special type of damage, such as that dealt by evil-aligned weapons or bludgeoning weapons. Others are vulnerable to weapons of a particular material.

Javascript D&D 3.5 Character Generator Javascript D&D 3.5 Character Generator Visit my Fourth Edition Character Generator also. Visit my Pathfinder Character Generator also. Weapons Without a doubt, weapons number among adventurers’ most coveted possessions. Whether weapons are used as tools to lay foul monsters low, as the medium for magical enhancements, or as outlets for a host of fundamental class abilities, few heroes head into the field without their favorite—or perhaps even a whole arsenal of their favorites. This section presents all manner of nonmagical weapons for PCs to purchase and put to use, whatever their adventures might entail. The Risus Monkey Random Dungeon Map Featuring geomorphs by the Risus Monkey. Inspired by Dyson's Random Morph Map and based on code by Rob Lang of The Free RPG Blog Risus Monkey's Random Map

Equipment Starting Treasure By default, we tend to think of starting characters as inexperienced beginners who have scraped together a few coins to equip themselves with mundane items for a new life of adventure. By adjusting what beginning characters start with, you can use starting treasure to define the characters, making them part of the world they’re about to explore.