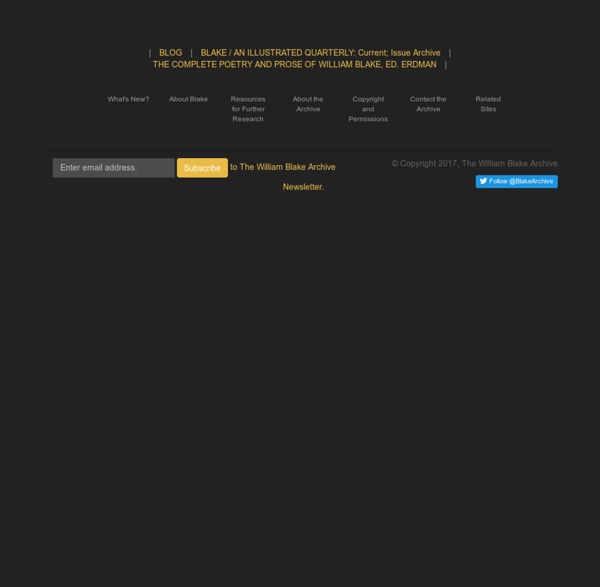 William Blake William Blake (28 November 1757 – 12 August 1827) was an English poet, painter, and printmaker. Largely unrecognised during his lifetime, Blake is now considered a seminal figure in the history of the poetry and visual arts of the Romantic Age. His prophetic poetry has been said to form "what is in proportion to its merits the least read body of poetry in the English language".[2] His visual artistry led one contemporary art critic to proclaim him "far and away the greatest artist Britain has ever produced".[3] In 2002, Blake was placed at number 38 in the BBC's poll of the 100 Greatest Britons.[4] Although he lived in London his entire life (except for three years spent in Felpham),[5] he produced a diverse and symbolically rich oeuvre, which embraced the imagination as "the body of God"[6] or "human existence itself".[7] Early life[edit] 28 Broad Street (now Broadwick Street) in an illustration of 1912.

The William Blake Page William Blake (b. Nov. 28, 1757, London--d. Aug. 12, 1827, London) was the first of the great English Romantic poets, as well as a painter and printer and one of the greatest engravers in English history. Largely self-taught, he began writing poetry when he was twelve and was apprenticed to a London engraver at the age of fourteen. Scholarly Research Database A popular resource found in many academic settings worldwide, this resource was designed for the premier researcher, rich with the most valuable, comprehensive multidisciplinary content available. As a leading scholarly database, it provides access to acclaimed full-text journals, magazines, and other valuable resources. Superb Title Coverage to Support the Academic Curriculum Academic Search Premier covers the expansive academic disciplines now being offered in colleges and universities. It provides comprehensive content, including PDF backfiles to 1975 or further for nearly 150 journals, and searchable cited references for more than 1,060 titles.

'A Modest Proposal', Jonathan Swift It is a melancholy object to those who walk through this great town or travel in the country, when they see the streets, the roads, and cabin doors, crowded with beggars of the female sex, followed by three, four, or six children, all in rags and importuning every passenger for an alms. These mothers, instead of being able to work for their honest livelihood, are forced to employ all their time in strolling to beg sustenance for their helpless infants: who as they grow up either turn thieves for want of work, or leave their dear native country to fight for the Pretender in Spain, or sell themselves to the Barbadoes. But my intention is very far from being confined to provide only for the children of professed beggars; it is of a much greater extent, and shall take in the whole number of infants at a certain age who are born of parents in effect as little able to support them as those who demand our charity in the streets. Many other advantages might be enumerated.

Making of America aking of America (MoA) is a digital library of primary sources in American social history from the antebellum period through reconstruction. The collection is particularly strong in the subject areas of education, psychology, American history, sociology, religion, and science and technology. The collection currently contains approximately 10,000 books and 50,000 journal articles with 19th century imprints. For more details about the project, see About MoA. Making of America is made possible by a grant from the Andrew W. Mellon Foundation. "George Eliot" by Virginia Woolf George Eliot was the pseudonym of novelist, translator, and religious writer Mary Ann Evans (1819-1880). This article by Virginia Woolf was first published in The Times Literary Supplement, 20th November, 1919. To read George Eliot attentively is to become aware how little one knows about her.

Documenting the American South: Open DocSouth What is DocSouth Data? Doc South Data provides access to some of the Documenting The American South collections in formats that work well with common text mining and data analysis tools. Documenting the American South is one of the longest running digital publishing initiatives at the University of North Carolina. It was designed to give researchers digital access to some of the library’s unique collections in the form of high quality page scans as well as structured, corrected and machine readable text. Doc South Data is an extension of this original goal and has been designed for researchers who want to use emerging technology to look for patterns across entire texts or compare patterns found in multiple texts. We have made it easy to use tools such as Voyant to conduct simple word counts and frequency visualizations (such as word clouds) or to use other tools to perform more complex processes such as topic modeling, named-entity recognition or sentiment analysis.

An online library of the visionary British poet's illuminated publications. by nda_librarian Apr 30