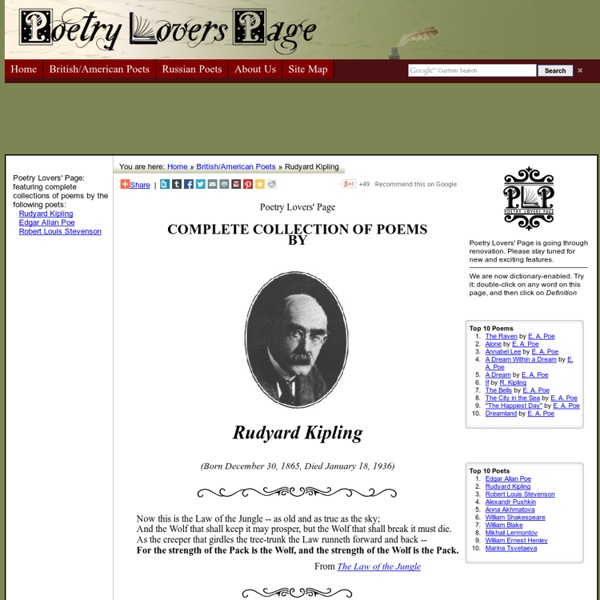 Kipling gained renown throughout the world as a poet and storyteller. He was also known as a leading supporter of the British Empire. As apparent from his stories and poems, Kipling interested himself in the romance and adventure which he found in Great Britain's colonial expansion. Kipling was born on Dec.30, 1865, in Bombay, where his father directed an art school. He learned Hindi from his nurse, and he also learned stories of jungle animals. At six, he was sent to school in England, but until he was 12, poor health kept him from attending. In 1889, Kipling return to England. Kipling composed many of his poems while living for several years in the United States in the mid-1890s. In 1896, Kipling returned to England from the United States. In 1900, Kipling went to South Africa to report the Boer War for an English newspaper. Before World War I, Kipling became active in politics. he widely lectured and wrote for the British cause both before and during the war.

100 Exquisite Adjectives By Mark Nichol Adjectives — descriptive words that modify nouns — often come under fire for their cluttering quality, but often it’s quality, not quantity, that is the issue. Plenty of tired adjectives are available to spoil a good sentence, but when you find just the right word for the job, enrichment ensues. Practice precision when you select words. Subscribe to Receive our Articles and Exercises via Email You will improve your English in only 5 minutes per day, guaranteed! 21 Responses to “100 Exquisite Adjectives” Rebecca Fantastic list! Poetry as a Vehicle for Social Change Skip to main content Login/Join You are here Home » Resources social justice, digital poetry, poetry, social change Resource Poetry as a Vehicle for Social Change Poetry as a vehicle for social change is a collection of lessons and poetry that has been used in middle and high school classes in Central Texas. Additionally, in the following pages of the resource, I've included student examples of this work. Related External links Social Action Collective Next Log in or register to post comments 0 Posted by Jennifer Woollven on Jul 23 2011 Browse this Resource Bookmark this page Jump to Comments Share post ShareThis Copy and Paste

Creative Writing For Dummies Cheat Sheet Rewriting and editing helps to tighten up your work. But it can be difficult – what to chop and when to stop may not be clear, and you may change your mind more than once during the process. Ask yourself whether you need to take out: Unnecessary information and explanation. Passages of dialogue that go on too long. You may need to add or expand: Something you know but have forgotten to tell the reader; perhaps the age of the main character. You may need to move: Dramatic sections to make a stronger opening. In your final edit: Check for grammar, punctuation and spelling mistakes. Electronic Poetry Portal For Better for Verse accent: emphasis given a syllable in ordinary usage, as provided by a pronouncing dictionary. See also stress. accentual-syllabic: the prosodic mode that dominated English-language poetry 1400-1900, and that this tutorial exclusively addresses. acephalous line: a “headless” line in iambic or anapestic meter, which omits (a) slack syllable(s) from the first foot. alexandrine: iambic hexameter line, usually with a strong midpoint caesura; most familiar in Romance-language poetry but not rare in English. alliteration: repetition of the same initial sound in nearby words. anapest: metrical foot consisting of two slacks and a stress: υ υ / anaphora: repetition of a word or phrase in initial position. assonance: harmonious repetition of the same vowel sound in nearby words. ballad meter: quatrain in alternating iambic tetrameter and trimeter lines rhyming abxb, traditionally used in folk narrative and during modern times adapted to lyric poetry. blank verse: unrhymed iambic pentameter. caesura: consonance:

Haiku Traffic Signs Bring Poetry To NYC Streets If you're walking or biking around New York City this weekend you might look up at a busy intersection and see signs like these: John Morse/NYC DOT Traffic warning street signs written as haiku are appearing on poles around the five boroughs, posted by the New York City Department of Transportation. "Poetry has a lot of power," Morse tells NPR's Scott Simon. Take, for example, these signs that urge pedestrians, drivers and bikers to walk, drive and ride responsibly: Accidents aren't funny, but Morse's artful treatment gets a serious message across in a powerful way. The bold colors and clever words take signs that would otherwise fade into the background into the forefront. "There's a lot of visual clutter ... all around us," Morse says. Morse says one delightful and unexpected consequence of the project is that it has brought some haiku poets out of the woodwork.

31 Quotes That Will Give You Chills - Ars Spiritus I think quotes have a powerful way of conveying an attitude to you which sometimes resonates so much that you feel ‘chills’ inside. Here’s a list of the quotes which have given me the most of these “chills”. Enjoy! Some people die at 25 and aren’t buried until 75. —Benjamin FranklinMost people are other people. Their thoughts are someone else’s opinions.

A Temporary Madness - June 14, 2011 A Temporary MadnessD.J. and Dylan on Father's Day. David John Thomas liked to drink alone. Author Paul Ferris illustrated the point in his biography Dylan Thomas with a portrait of David John alone in a corner table at his local Welsh pub, the Bush. He describes David John Thomas as “a clever, disappointed man”. As a boy, D.J. was a promising student. From childhood, Dylan Thomas accepted the poet’s life as his fate and set out to prove that his father’s rage, along with his love of language, would live on. Though it is a poem about anger, “Do not go gentle into that good night" is not an angry poem despite its iconic line: “Rage, rage against the dying of the light.” It was in rage that Dylan and D.J. could lose themselves. But rage is also a temporary madness. Son and father were linked as much by the fantasy of the poet’s life as by poetry itself. Dylan never showed his poem to the wasting D.J.

Where I'm From, a poem by George Ella Lyon, writer and teacher “Where I'm From” grew out of my response to a poem from Stories I Ain't Told Nobody Yet (Orchard Books, 1989; Theater Communications Group, 1991) by my friend, Tennessee writer Jo Carson. All of the People Pieces, as Jo calls them, are based on things folks actually said, and number 22 begins, “I want to know when you get to be from a place. ” Jo's speaker, one of those people “that doesn't have roots like trees, ” tells us “I am from Interstate 40” and “I am from the work my father did. ” In the summer of 1993, I decided to see what would happen if I made my own where-I'm-from lists, which I did, in a black and white speckled composition book. I edited them into a poem — not my usual way of working — but even when that was done I kept on making the lists. The process was too rich and too much fun to give up after only one poem. Since then, the poem as a writing prompt has traveled in amazing ways. I hope you won't stop there, though. Where to Go with "Where I'm From"

Bees and Morning Glories by John Ciardi Friday Jun. 14, 2013 Listen Download E-mail Share Bees and Morning Glories by John Ciardi Morning glories, pale as a mist drying, fade from the heat of the day, but already hunchback bees in pirate pants and with peg-leg hooks have found and are boarding them. "Bees and Morning Glories" by John Ciardi, from The Collected Poems of John Ciardi. © The University of Arkansas Press, 1997. Today is Flag Day. It's the birthday of Ernesto "Che" Guevara (books by this author), born Ernesto Guevara de la Serna in Rosario, Argentina (1928). After graduating from medical school in 1953, he went to Mexico, where he met the Castro brothers, Raúl and Fidel, and joined them in their plan to overthrow the Batista dictatorship in Cuba. In 1965, Guevara dropped out of the picture. Be well, do good work, and keep in touch

Function Keys - www.compukiss.com One of the biggest differences between a typewriter keyboard and the computer keyboard is the row of keys at the top of the keyboard that are labeled F1 through F12. Commonly referred to as Function Keys, these keys were frequently used in the good old days of DOS programs. In today’s Windows world of computers, you can probably use your computer without ever using one of these keys. Yet, these function keys provide some interesting shortcuts for common computer functions that can be useful tools in everyday computing. The function keys are frequently used in combination with other keys such as the CTRL key, the ALT key, and the Shift key. This results in a plethora of possible keyboard shortcuts. Here is a brief rundown of the function key and what they can do for you. F1As a throwback to DOS days, you will find that the F1 key will often bring up a help menu. F2You can use the F2 key to rename an item when working in Windows. F4The F4 key has some very useful functionality.

AP Poetry Terms AP English Poetry Terms (Presented by Dennis Carroll of High Point University at AP Workshop) Listed and defined below are literary terms that you will need to know in order to discuss and write about works of poetry. You are already familiar with many of these. l. alliteration- the repetition of identical or similar consonant sounds, normally at the beginnings of words. “Gnus never know pneumonia” is an example of alliteration since, despite the spellings, all four words begin with the “n” sound. 2. allusion- a reference in a work of literature to something outside the work, especially to a well-known historical or literary event, person, or work. 3. antithesis- a figure of speech characterized by strongly contrasting words, clauses, sentences, or ideas, as in “Man proposes; God disposes.” 4. apostrophe- a figure of speech in which someone (usually, but not always absent), some abstract quality, or a nonexistent personage is directly addressed as though present. Milton!