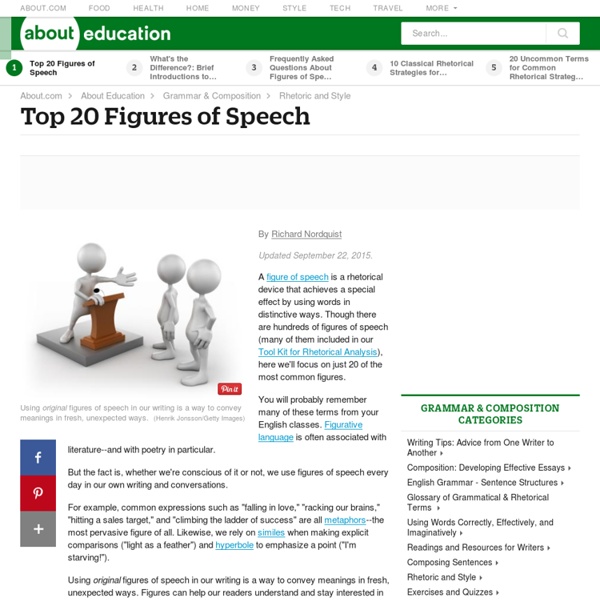 By Richard Nordquist Updated September 22, 2015. A figure of speech is a rhetorical device that achieves a special effect by using words in distinctive ways. You will probably remember many of these terms from your English classes. But the fact is, whether we're conscious of it or not, we use figures of speech every day in our own writing and conversations. For example, common expressions such as "falling in love," "racking our brains," "hitting a sales target," and "climbing the ladder of success" are all metaphors--the most pervasive figure of all. Using original figures of speech in our writing is a way to convey meanings in fresh, unexpected ways. continue reading below our video Loaded: 0% Progress: 0% For advice on creating figures of speech, see Using Similes and Metaphors to Enrich Our Writing. How to Review the Top 20 Figures of SpeechClick on each of the following terms to visit a glossary page. After studying these figures, test your knowledge at: The Top 20 Figures

Table of Contents - Mixu's Node book - Mixu's Node book 19 Outstanding Words You Should Be Working Into Conversation There are some of our favorite words that appeared in mental_floss stories in 2011. Some are foreign words. Others come from medical dictionaries. And there's a surprising amount of hobo slang. Have fun working these into conversation this holiday season! Gene Lee / Shutterstock.com 1. 2. 3. 4. milliHelen: The quantity of beauty required to launch just one ship. 5. 6. 7. 8. © Joe Giron/Corbis 9. 10. 11. 12. 13. 14. 15. 16. 17. 18. 19. Thanks to Stacy Conradt, Adrienne Crezo, Bill DeMain, Haley Sweetland Edwards, Jamie Spatola, Ethan Trex and a reader named John .

Programming JavaScript Applications by Eric Elliott Take advantage of JavaScript’s power to build robust web-scale or enterprise applications that are easy to extend and maintain. By applying the design patterns outlined in this practical book, experienced JavaScript developers will learn how to write flexible and resilient code that’s easier—yes, easier—to work with as your code base grows. $27.99 Read Online for FreeBrought to you by OSCON Conference Buy it on oreilly.com JavaScript may be the most essential web programming language, but in the real world, JavaScript applications often break when you make changes. List of thought processes Nature of thought[edit] Thought (or thinking) can be described as all of the following: An activity taking place in a: brain – organ that serves as the center of the nervous system in all vertebrate and most invertebrate animals (only a few invertebrates such as sponges, jellyfish, adult sea squirts and starfish do not have a brain). It is the physical structure associated with the mind. mind – abstract entity with the cognitive faculties of consciousness, perception, thinking, judgement, and memory. Types of thoughts[edit] Content of thoughts[edit] Types of thought (thinking)[edit] Listed below are types of thought, also known as thinking processes. Animal thought[edit] See Animal cognition Human thought[edit] Human thought Classifications of thought[edit] Williams' Taxonomy Creative processes[edit] Creative processes – Decision-making[edit] Decision-making Erroneous thinking[edit] see Error for some examples, see also Human error) Emotional intelligence (emotionally based thinking)[edit] Reasoning –

jQuery Fundamentals :: A guide to the basics of jQuery