50 Amazing and Essential Novels to Enrich Your Library 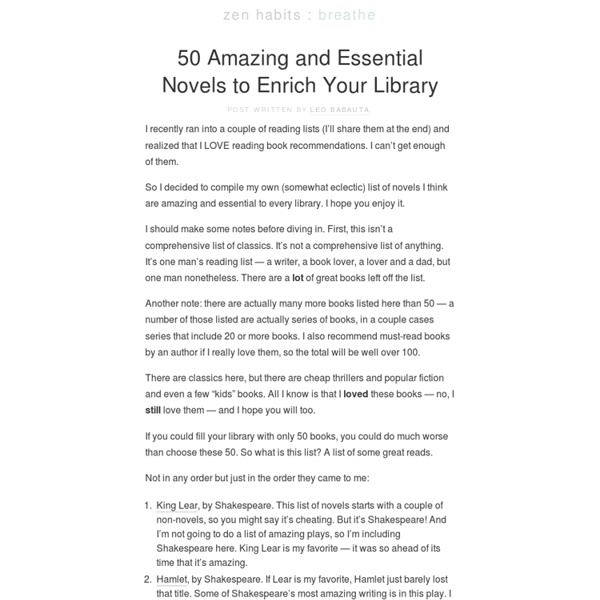 Post written by Leo Babauta. I recently ran into a couple of reading lists (I’ll share them at the end) and realized that I LOVE reading book recommendations. I can’t get enough of them. So I decided to compile my own (somewhat eclectic) list of novels I think are amazing and essential to every library. I hope you enjoy it. I should make some notes before diving in. Another note: there are actually many more books listed here than 50 — a number of those listed are actually series of books, in a couple cases series that include 20 or more books. There are classics here, but there are cheap thrillers and popular fiction and even a few “kids” books. If you could fill your library with only 50 books, you could do much worse than choose these 50. Not in any order but just in the order they came to me: King Lear, by Shakespeare. Some other lists of books I’ve enjoyed recently:

Moby Dick By Herman Melville (1819-1891) (actual title: ) is a novel of epic proportions with characteristics of Greek and Elizabethan stage tragedies. Melville completed the book at Arrowhead, Mass., where he lived for a while. is arguably the greatest sea novel ever written. Some critics also maintain that is the greatest American novel ever written. was published in October 1851 in London by Richard Bentley and November 1851 in New York by Harper & Brothers. How to Build a Universe That Doesn't Fall Apart Two Days Later First, before I begin to bore you with the usual sort of things science fiction writers say in speeches, let me bring you official greetings from Disneyland. I consider myself a spokesperson for Disneyland because I live just a few miles from it — and, as if that were not enough, I once had the honour of being interviewed there by Paris TV. For several weeks after the interview, I was really ill and confined to bed. I think it was the whirling teacups that did it.

What Should You Read This Summer? (INFOGRAPHIC) Summer technically begins next week, but there's no need to wait until you're in the doldrums to escape with a new novel or an old favorite. Now's the perfect time to head outside and cross off a few bucket list books ("Infinite Summer," anyone?) before humid, 90-degree days lull you into complacency and cat naps. If you aren't sure what to read during your extra hours of sunlight this summer, Teach.com made this handy infographic to help you out. 400 Free eBooks: Download to Kindle, iPad/iPhone & Nook Download 800 free eBooks to your Kindle, iPad/iPhone, computer, smart phone or ereader. Collection includes great works of fiction, non-fiction and poetry, including works by Asimov, Jane Austen, Philip K. Dick, F. Scott Fitzgerald, Neil Gaiman, Tolstoy, Dostoevsky, Shakespeare, Ernest Hemingway, Virginia Woolf & James Joyce. Also please see our collection 1,000 Free Audio Books: Download Great Books for Free, where you can download more great books to your computer or mp3 player.

30 Books I’m Glad I Read Before 30 In various ways, these 30 books convey some of the philosophy of how Angel and I live our lives. I honestly credit a fraction of who I am today to each title. Thus, they have indirectly influenced much of what I write about on this site. A medley of both fiction and nonfiction, these great reads challenged my internal status quo, opening my mind to new ideas and opportunities, and together they gave me a basic framework for living, loving, learning and working successfully. If you haven’t read these books yet, I highly recommend doing so.

Herman Melville A selective list of online literary criticism for the nineteenth-century American novelist and story writer Herman Melville, favoring signed articles and peer-reviewed sources Main Page | 19th-Century American Writers | 19th-Century Novelists | About LiteraryHistory.com Introduction & Biography "Herman Melville." A short biography of Melville, by Prof. Excerpts: How to Win... People Six Ways To Make People Like You Become genuinely interested in other people.Smile. Remember that a man's name is to him the sweetest and most important sound in the English language. 5 e-Book Collections with Over 100,000 Free e-Books Now that we have so many devices that enable us to read e-Books with ease, even those who were initially skeptical have now jumped on the e-Book bandwagon. Whether you have an iPhone, Kindle, Nook, or smartphone — or you’re a student at a college offering free laptops and iPads — you will find free e-Books which are compatible with your device on these websites. Here are 5 e-Book collections which contain over 100,000 free e-Books: BookRix Over 95,000 new books written by the community’s 371,000 members are available on BookRix for free. They also offer foreign language and audiobooks.ManyBooks.net Over 29,000 free eBooks are available for the Kindle, Nook, iPad and most other eReaders on Manybooks.net.

Implementing.Cisco.Unified.Communications.Manager.Part2.2nd.Edit Implementing.Cisco.Unified.Communications.Manager.Part2.2nd.Edit Type: Other > E-books Files: Size: 13.04 MiB (13676185 Bytes) Yeats William Butler Yeats died. And, of course, Yeats makes me think of my father. My first published piece in The Sewanee Review was about the Yeats-dad continuum.