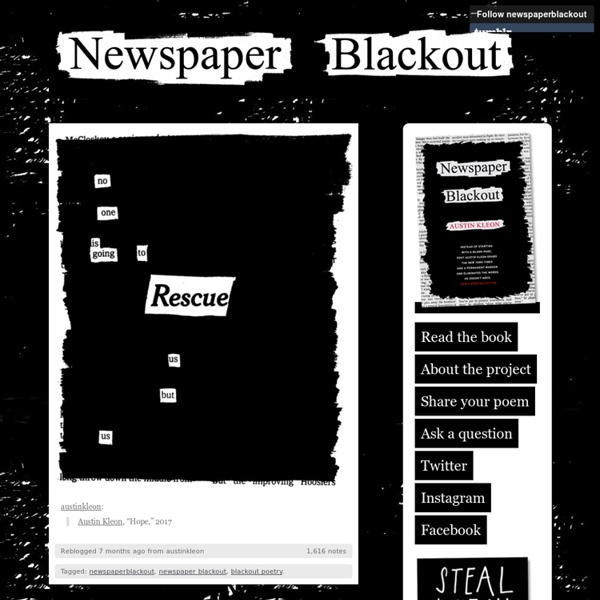 Display of blackout poetry by the 8th grade students of Karen Tegtmeyer! Awesome. Awesome: grade nine students from Alberta, Canada making blackout poetry! Thanks @MsAmberJM for sharing! Kleon addresses with equal parts humility, honesty, and humor one of the quintessential questions of the creative life: How do you get “discovered”? In some ways, the book is the mirror-image of Kleon’s debut — rather than encouraging you to “steal” from others, meaning be influenced by them, it offers a blueprint to making your work influential enough to be theft-worthy.

30 Great Articles and Essays about Words and Writing The best essays on writing -- articles about writing -- essays about writing Essential Essays for Writers On Keeping a Notebook by Joan Didion 10 Great Podcasts for Writers Podcasts are a fantastic (free!) way to gain new skills and perspectives for your writing. They can also help you to keep up with the latest industry news and trends. Here are 10 of the best. The Guardian Books PodcastUpdated weekly, The Guardian Books Podcast is presented by literary editor Claire Armitstead. Hiroshima marks 70 years since atomic bomb Residents in the Japanese city of Hiroshima are commemorating the 70th anniversary of the first atomic bomb being dropped by a US aircraft. A ceremony, attended by PM Shinzo Abe, was held at Hiroshima's memorial park before thousands of lanterns are released on the city's Motoyasu river. The bombing - and a second one on Nagasaki three days later - is credited with bringing to an end World War Two.

George Orwell: Politics and the English Language Most people who bother with the matter at all would admit that the English language is in a bad way, but it is generally assumed that we cannot by conscious action do anything about it. Our civilization is decadent and our language — so the argument runs — must inevitably share in the general collapse. It follows that any struggle against the abuse of language is a sentimental archaism, like preferring candles to electric light or hansom cabs to aeroplanes.

Take Out Your Pencils Writing Program at UMASS Amherst I use this activity at the beginning of Unit II to help students get into the habit of reading actively and paying attention to the text and their responses to it. Adapted from an exercise by Peggy Woods in the old Text Wrestling Book, this is one of the activities my students give the most positive feedback on. Trying On Style Using Poe, Woolf, And Hemmingway Writing Program at UMASS Amherst Hand out excerpts from Poe ("The Fall of the House of Usher"), Woolf (To the Lighthouse), and Hemingway (A Moveable Feast). Ask students to read the pieces to themselves and identify the mood of each piece. Discuss and list the moods students identify. Have students read excerpts aloud, one at a time for the entire class.

Ways To Weave The Journal Into 112 Writing Program at UMASS Amherst Contributed by: Laura Solomon Below is how I introduce the journal to my class. I've also listed some journal prompts and pasted my "journal day" activities below. Become a slam poet in five steps - Gayle Danley Gayle was born in New York City and, at age 8 months, moved with her family to Atlanta, Georgia. It was not until after she finished school that she learned about slam poetry. She embraced it almost immediately won the 1994 National Individual Slam Poet in Ashville, NC just months after being exposed to slam poetry. In Heidelberg, Germany, she became the 1996 International Slam Poet Champion.The mission of Poetry Slam Incorporated (PSI) is to promote the performance and creation of poetry while cultivating literary activities and spoken word events in order to build audience participation, stimulate creativity, awaken minds, foster education, inspire mentoring, encourage artistic statement and engage communities worldwide in the revelry of language. Slam combines movement, voice, drama and the written word for an unforgettable spoken word experience.

untitled You should gain an understanding of the basic metrical pattern. 1. Reading Read the Introduction, pages one to twenty-three, in Timothy Steele’s book All the Fun’s in How You Say a Thing.Take the quiz on the Introduction to Steele’s text in Blackboard. 2. Poem