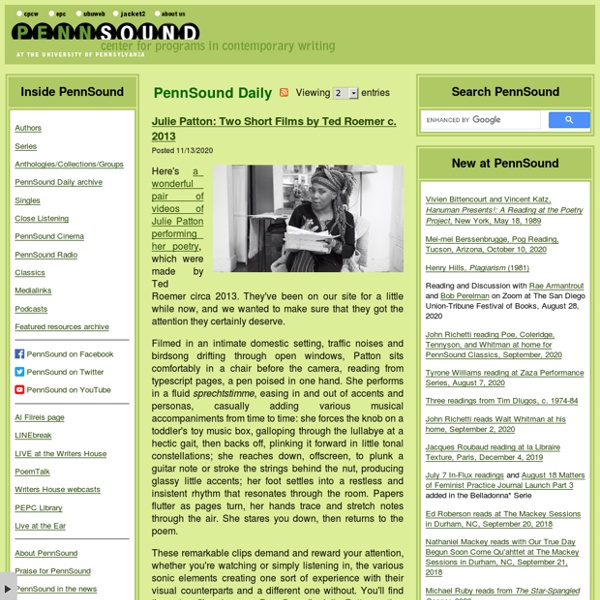 Peter Jaeger Performed by the Yehudi Menuhin Music School, 2016 Posted 2/23/2017 Here's is the latest addition to our author page for poet and critic Peter Jaeger to get your toes tapping for the coming weekend. Daniel Penny, winner of the BBC's young composer of the year award in 2015, set Peter Jaeger's poem "Sub Twang Mustard" to music. The piece is performed here by members of the Yehudi Menuhin Music School and trombone soloist John Kenny, under the direction of John Cooney. "Sub Twang Mustard" was originally published in Jaeger's 2004 book Eckhart Cars. You can listen in here and be sure to check out the rest of the recordings archived on PennSound's Peter Jaeger author page, including sets from Manchester's The Other Room series, the if p then q series in London, and a 2013 reading at London's Kingsgate Gallery. New at J2: Chris Funkhouser on Cecil Taylor Posted 2/22/2017 We've just published a wonderful new piece from Chris Funkhouser over at Jacket2. Edmond Jabes: New Author Page

Search Results <div class='alert alert--flash alert--warning'><div class='container'><h2 class='h9'>You have JavaScript disabled</h2> For the best experience, please turn JavaScript on. <a href=' how</a></div></div> poetry 1 - 12 of 302 results King Lear from ShakespeareMag.com The tragedy King Lear is one of William Shakespeare's most acclaimed plays. Many have gone as far as to affirm that it is simply not possible to write a tragedy that surpasses the depth and transcendence that characterise King Lear. It is believed that the play was written at the beginning of the 17th century, most likely between 1603 and 1606. Shakespeare also wrote a theatrical adaptation of this play around 1623. It is likely that Shakespeare drew some inspiration from mythical figures like the Leir of Britain, whose legend was popular as far back as the 8th century.

Lessons Worth Sharing TED-Ed Lessons 23,282 Views Slam poetry packs an emotional punch by using powerful verbal metaphors; animation can do the... For Better for Verse accent: emphasis given a syllable in ordinary usage, as provided by a pronouncing dictionary. See also stress. accentual-syllabic: the prosodic mode that dominated English-language poetry 1400-1900, and that this tutorial exclusively addresses. MAGASIN The name « MAGASIN » is linked to the history of the building in which it is located. The National Contemporary Art Centre is housed in a 3000 m2 industrial hall built in 1900 by the Gustave Eiffel workshops for the Paris World Fair. Bought by Bouchayer-Viallet Ltd from Grenoble, working in the area of hydroelectric equipment, the iron structure was dismantled, transported and reassembled. The Architecture The art centre’s architectural plan was designed by the architect Patrick Bouchain.

Poetry and Literature Poet Laureate, Juan Felipe Herrera Herrera took up his duties as the 21st Poet Laureate on Tuesday, September 15th—the first day of Hispanic Heritage Month—with a reading of his work at the Library’s Coolidge Auditorium. Herrera launched his Poet Laureate Project—La Casa de Colores—on September 15 (see details below). More About Juan Felipe Herrera Past Poets Laureate Lamb to the Slaughter Lamb to the Slaughter by Roald Dahl (1916-1990) Approximate Word Count: 3899 The room was warm and clean, the curtains drawn, the two table lamps alight-hers and the one by the empty chair opposite. On the sideboard behind her, two tall glasses, soda water, whiskey. Fresh ice cubes in the Thermos bucket.

Inspire with Poetry! 10+ Ideas & Resources “Poetry is when an emotion has found its thought and the thought has found words.” – Robert Frost April is National Poetry month and the perfect excuse to inspire your students with poetry no matter what subject you teach. Try posting a short poem on the board related to the topic of the day, such as the science haikus found @Sciencehaiku. Then give your students the mission to create their own poems that explore the topic more deeply. For example, they can create descriptive poems about animals and challenge their peers to guess the animal. Metaphors and Similes in English: Langston Hughes teaches us the difference - Skype English Classes Langston Hughes was an American poet, novelist and playwright who wrote in the first part of the 20th century. He was part of the Harlem Renaissance, an artistic movement of the time in which black writers, musicians and artists were to the forefront of the cultural movement. In order to fully understand Langston’s poetry it is important to be aware that he used a lot of metaphors and similes in his writing to convey his thoughts. style="display:inline-block;width:728px;height:15px" data-ad-client="ca-pub-3034983613232689" data-ad-slot="3511322546">

Poetry Comics! Alexander Rothman ≡ Menu Poetry Comics! Alexander Rothman The Seven Basic Plots According to the British journalist and author Christopher Booker, there are only seven ‘storylines’ in the world. In his book, The Seven Basic Plots: Why We Tell Stories, a work that took over forty years to write, Booker surveys world literature, outlining commonalities and showing that, although there are a multitude of tales and endless variety in the telling, all narratives are really variations of the basic seven. Booker’s work is detailed, interesting, and very long—over 700 pages—but his message is simple.