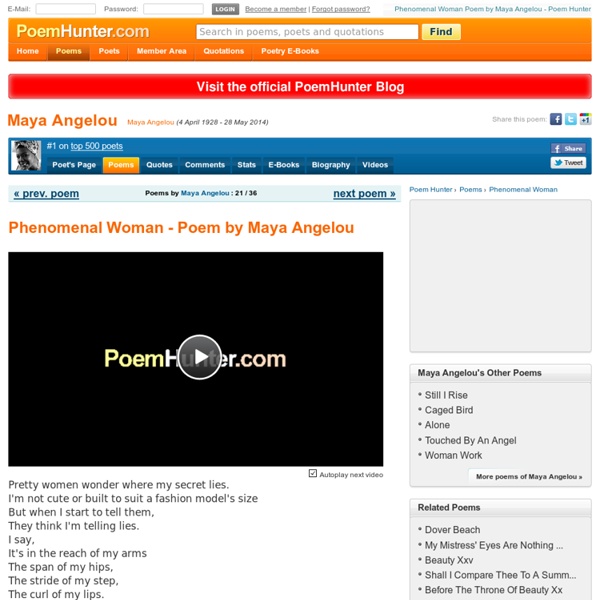 All The World's A Stage Poem by William Shakespeare All the world's a stage,And all the men and women merely players;They have their exits and their entrances,And one man in his time plays many parts,His acts being seven ages. At first, the infant,Mewling and puking in the nurse's arms.Then the whining schoolboy, with his satchelAnd shining morning face, creeping like snailUnwillingly to school. And then the lover,Sighing like furnace, with a woeful balladMade to his mistress' eyebrow. Nameless Pain by Elizabeth Drew Barstow Stoddard I should be happy with my lot: A wife and mother – is it not Enough for me to be content? What other blessing could be sent? A quiet house, and homely ways, That make each day like other days; I only see Time’s shadow now Darken the hair on baby’s brow! No world’s work ever comes to me, No beggar brings his misery; I have no power, no healing art With bruised soul or broken heart. I read the poets of the age, ’Tis lotus-eating in a cage; I study Art, but Art is dead To one who clamors to be fed With milk from Nature’s rugged breast, Who longs for Labor’s lusty rest. O foolish wish! If nay other lot were mine. Source: She Wields a Pen: American Women Poets of the Nineteenth Century (University of Iowa Press, 1997) Discover this poem’s context and related poetry, articles, and media. Poet Elizabeth Drew Barstow Stoddard 1823–1902 POET’S REGION U.S., New England Subjects Relationships, Home Life, Activities, Jobs & Working, Arts & Sciences, Social Commentaries, Gender & Sexuality Biography

The Lady Of Shalott (1832) Poem by Alfred Lord Tennyson PART I On either side the river lie Long fields of barley and of rye, That clothe the wold and meet the sky; And thro' the field the road runs by To many-tower'd Camelot; The yellow-leaved waterlily The green-sheathed daffodilly Tremble in the water chilly Round about Shalott. Willows whiten, aspens shiver. The sunbeam showers break and quiver In the stream that runneth ever By the island in the river Flowing down to Camelot. Four gray walls, and four gray towers Overlook a space of flowers, And the silent isle imbowers The Lady of Shalott. Underneath the bearded barley, The reaper, reaping late and early, Hears her ever chanting cheerly, Like an angel, singing clearly, O'er the stream of Camelot. The little isle is all inrail'd With a rose-fence, and overtrail'd With roses: by the marge unhail'd The shallop flitteth silken sail'd, Skimming down to Camelot. No time hath she to sport and play: A charmed web she weaves alway. She lives with little joy or fear.

The Look by Sara Teasdale Strephon kissed me in the spring, Robin in the fall, But Colin only looked at me And never kissed at all. Strephon's kiss was lost in jest, Robin's lost in play, But the kiss in Colin's eyes Haunts me night and day. Discover this poem’s context and related poetry, articles, and media. Poet Sara Teasdale 1884–1933 SCHOOL / PERIOD Modern Subjects Love, Relationships, Classic Love, Infatuation & Crushes, Unrequited Love, Heartache & Loss Poetic Terms Rhymed Stanza, Common Measure, Pastoral Biography Sara Teasdale received public admiration for her well-crafted lyrical poetry which centered on a woman's changing perspectives on beauty, love, and death. Continue reading this biography My Shadow Poem by Robert Louis Stevenson From Child's Garden of Verses I have a little shadow that goes in and out with me,And what can be the use of him is more than I can see.He is very, very like me from the heels up to the head;And I see him jump before me, when I jump into my bed. The funniest thing about him is the way he likes to grow--Not at all like proper children, which is always very slow;For he sometimes shoots up taller like an india-rubber ball,And he sometimes goes so little that there's none of him at all. He hasn't got a notion of how children ought to play,And can only make a fool of me in every sort of way.He stays so close behind me, he's a coward you can see;I'd think shame to stick to nursie as that shadow sticks to me! One morning, very early, before the sun was up,I rose and found the shining dew on every buttercup;But my lazy little shadow, like an arrant sleepy-head,Had stayed at home behind me and was fast asleep in bed.

Bright star! would I were steadfast as thou art by John Keats This famous sonnet was written by Keats in Joseph Severn's copy of The Poetical Works of William Shakespeare opposite the poem 'A Lover's Complaint'. Because it was written during Keats and Severn's voyage to Italy, many people (including Severn) believed it be Keats's last poem. It was actually titled 'Keats's Last Sonnet' by Milnes in his 1848 biography of Keats. However, careful studies by biographers / critics have dated its composition to spring 1819. It was first published in a newspaper in 1838, seventeen years after Keats's death. crop from the original manuscript of the 'Bright star!' Bright star!

Annabel Lee By Edgar Allan Poe, Famous Sad Love Poem It was many and many a year ago, In a kingdom by the sea, That a maiden there lived whom you may know By the name of ANNABEL LEE; And this maiden she lived with no other thought Than to love and be loved by me. I was a child and she was a child, In this kingdom by the sea; But we loved with a love that was more than love- I and my Annabel Lee; With a love that the winged seraphs of heaven Coveted her and me. And this was the reason that, long ago, In this kingdom by the sea, A wind blew out of a cloud, chilling My beautiful Annabel Lee; So that her highborn kinsman came And bore her away from me, To shut her up in a sepulchre In this kingdom by the sea. The angels, not half so happy in heaven, Went envying her and me- Yes! But our love it was stronger by far than the love Of those who were older than we- Of many far wiser than we- And neither the angels in heaven above, Nor the demons down under the sea, Can ever dissever my soul from the soul Of the beautiful Annabel Lee.